“Unfortunately, you are not doing the trek to the Valley of Flowers the right time of the season. The flowers are generally found in full-bloom sometime between 15th July to 15th August,” provided the tour guide Shobhit, making me feel sorry for myself.

On September 5th, the Valley had already started shedding the flowers, and with them, some of the leaves too. The monsoon was far from over too. In about one month from now, winter would hit the Himalayas hard, turning the Valley of Flowers into an ordinary and charmless landscape, with patches of white and (almost) no green. Disheartened, I realized how I had been planning to visit the place for the previous three years, and when I finally made it there, I made at the wrong time of the year – the abscission. 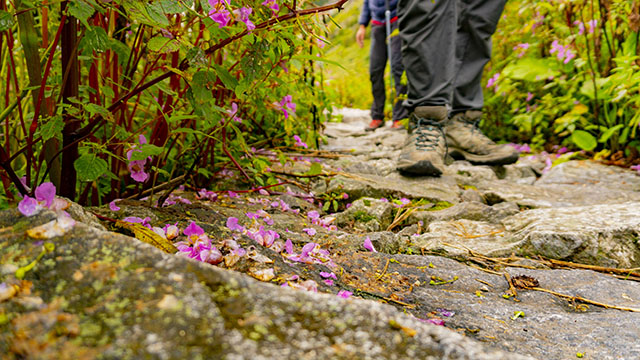 It was clear that September is certainly not a good time to visit the Valley of Flowers. Though the valley was still looking gorgeous, with frequent waterfalls and water-crossings keeping me entertained, if I had made it in July or August, I would have seen many more colours. The entire experience would have been far more awarding, and the valley would have appeared more appealing, than offering just a constant green. 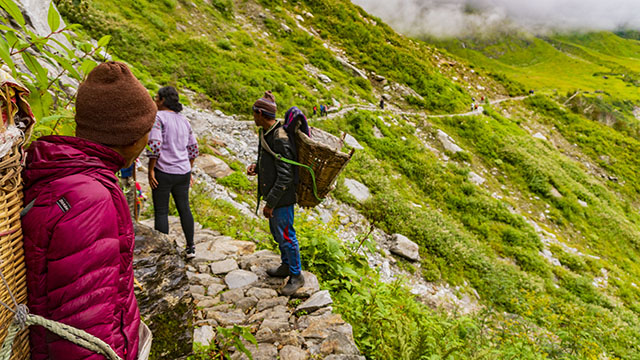 Valley Of Flowers: How To Get There

For the Valley of Flowers, Joshimath is the nearest big town and the base of all transportation, with frequent buses and cabs leaving from Rishikesh. From Joshimath to Govindghat, the start of the trek is a short drive (if you’ve taken the bus going to Badrinath, Govindghat will come on the way. So no need to take an extra ride).

The drive from Rishikesh to Joshimath (and further to Govindghat) will take almost an entire day leaving you with no option but to spend a night at either of the two places and continuing the journey the following morning. Govindghat, moreover, has a security checkpoint that only allows tourists to go further had they checked-in before 2 pm, making it almost impossible for anyone to do Rishikesh to Ghangaria in a day. 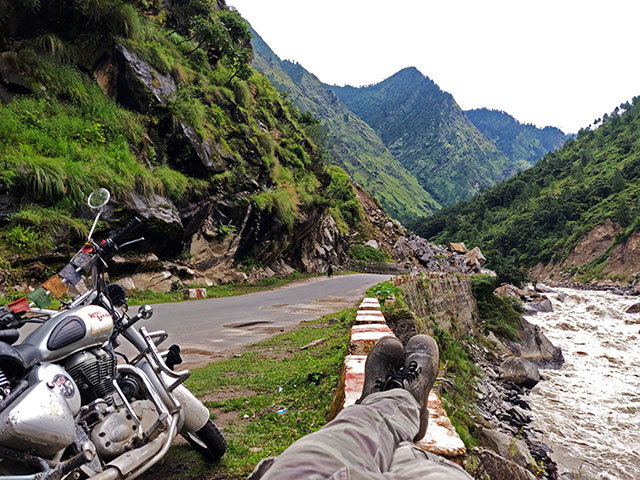 Since I was riding a motorbike, it took me nearly 10 hours to cover the 270km distance between Rishikesh and Govindghat. I arrived in Govindhat after 4 in the evening and decided to stay in the Gurudwara (that had a free dormitory or a private room for 1100 Rupees per night). Food, as customary it is in any Gurudwara around the world, was free, and offered throughout the day (any donations were, however, totally welcome). 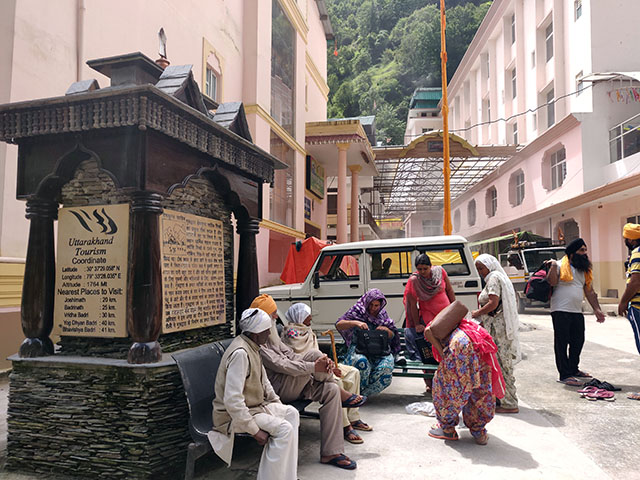 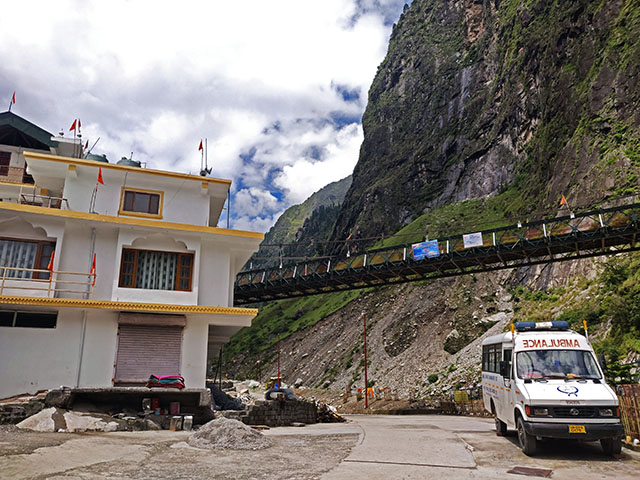 The trek from Govindghat to Ghangaria (the base for Valley of Flowers) is a 12 km long, but relatively flat walk, about 4km of which is a picturesque motorable road (until a place called Pulna), leaving the total length of the trek to just about 8 km. Those driving on their own can find parking at the starting point of the trek at Pulna. One can also hire regularly shared jeeps (between Govindghat and Pulna) for 50 Rupees per person. You will still have to trek around 8 km from that point but it saves more than an hour of trekking.

Though often termed as a trek, I won’t actually call the trek of the Valley of Flowers a trek but a hike (except for the last 4kms of it) because that’s what it is – a well-drawn path dotted with frequent tea shops, with pony operators and porters constantly luring trekkers for lifts. One can even pre-book a pony online and have it waiting at the starting point, putting the entire charm of the trek in vain. 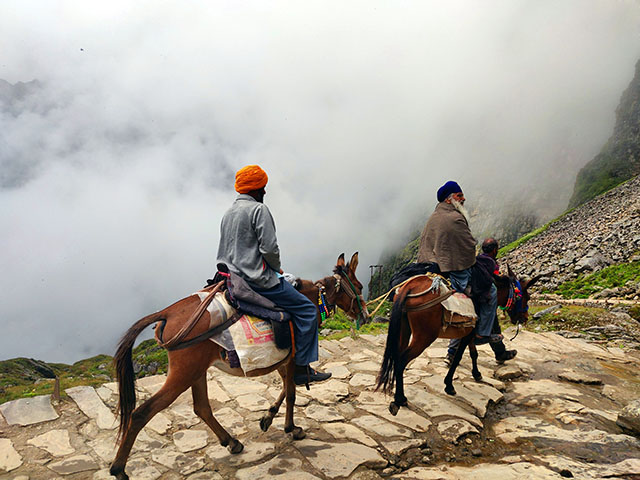 It was, at times, moreover sad to see porters (as old as 60 years in age) carrying people on their back, as customers sat proudly and pitilessly. 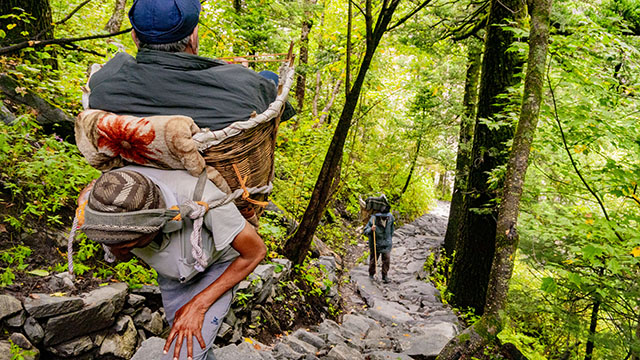 But fret not, the entire trail of a steady tree-cover along the route and the river Lakshman-Ganga flowing by the trekking path will keep you entertained.

It’s moreover a pleasure to stop by and gaze at river Lakshman-Ganga when you get exhausted. 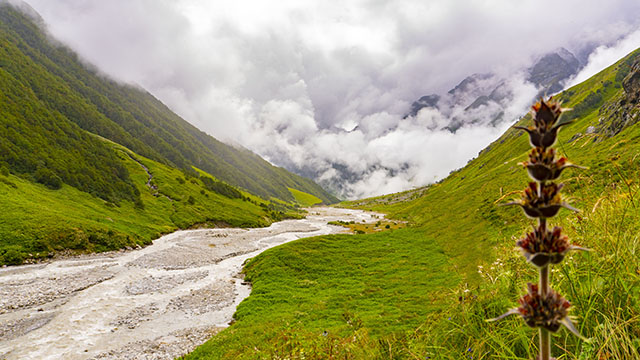 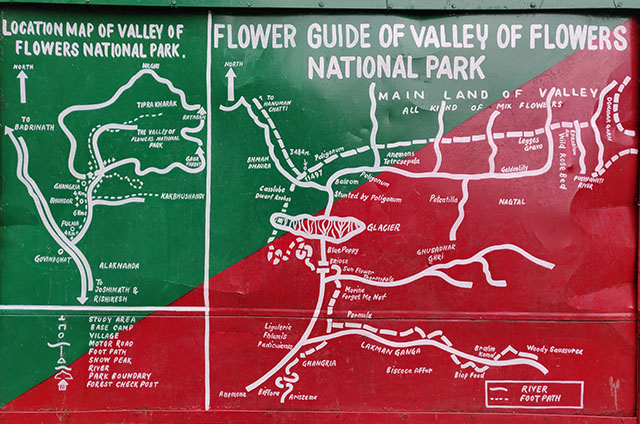 The trek from Ghangaria to the Valley of Flowers is the most amusing part of the journey (of course!) with River Chandravati staying on your right for the most of the time, and joining it is the countless waterfalls, most of which appear from a distance. Some of the waterfalls will moreover come your way as river crossings. 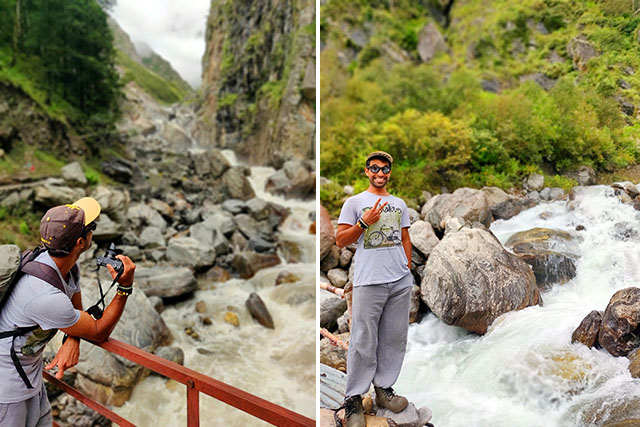 People usually start (from Ghangaria) early in the morning for the valley and come back late in the evening. It is advised to carry packed lunch inside the park as there is absolutely no place in the park where you can get food. Also, remember to carry a water bottle and keep re-fueling it on the way.

For most people, the 6km trek to the valley is quite strenuous and steep. But don’t be discouraged as it’s very much doable. It took me about 4 hours (with enough photo-breaks on the way) to walk a 6 km trail before I decided to delve deep into the valley towards the Tipra Glacier. So just be patient, and keep walking. I crossed the registration counter at 8 in the morning, spent almost 5 hours to reach Tipra Glacier before starting heading back.