This Gangotri to Gomukh trek journey was not only my first solo journey but my first ever travel blog too!

“It’s amazing how life experiences, sometimes, leave a strong impression on us. They force us to change our lives forever,” I remember someone telling me once. And I happened to live that statement in 2015 after my first-ever solo trek from Gangotri to Gomukh.

At that time I had no idea that I would soon quit my job to travel the world.

As they say that life experiences aren’t something to be denied but to be celebrated, I think I happened to celebrate my experience so strongly that it eventually became a way of life.

If you are new on this blog and haven’t read about me, I want to tell you that I work as a full-time travel blogger. I started this blog in 2016 and since then, I’ve only been making money from this travel blog and travelling the world on travel sponsorships.

Now let’s get back to the topic in hand… 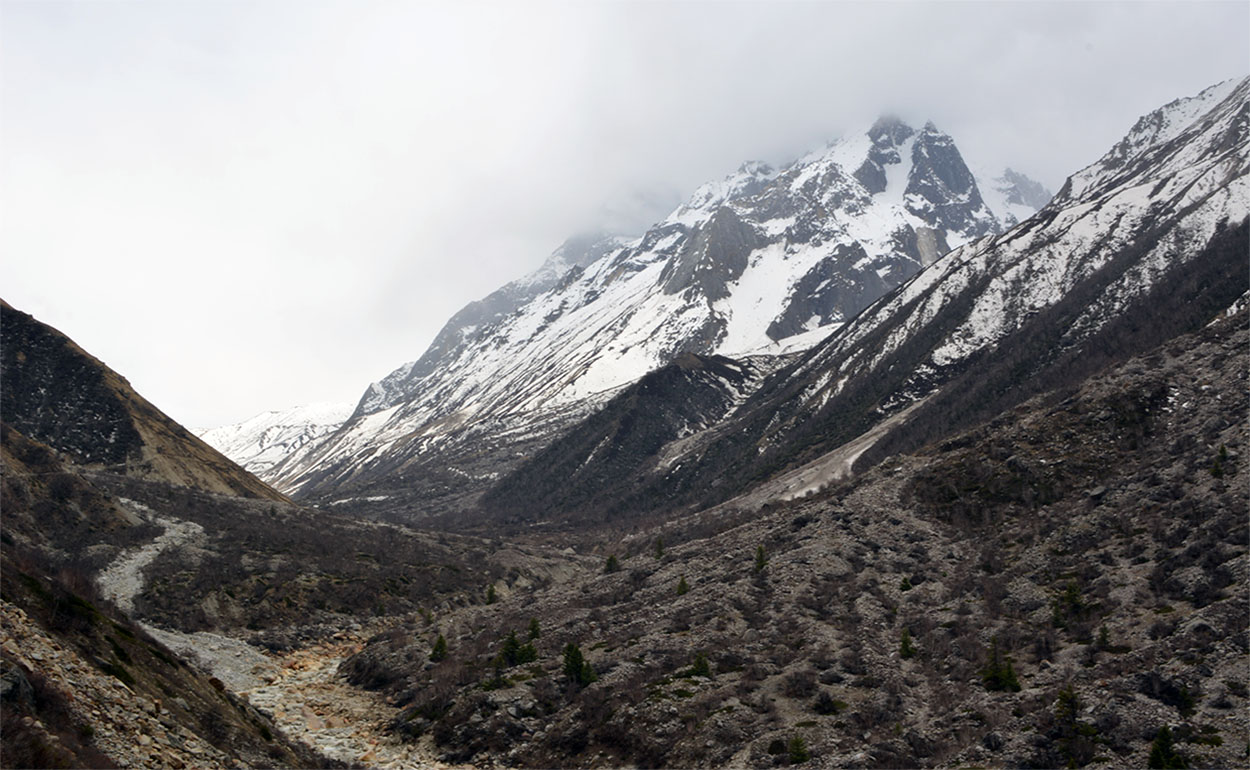 My Gangotri to Gomukh Trek

As I said before, it was my first ever solo-travel experience. I don’t know how I ended up planning this trek but I remember why I planned it solo. My travel partner (a colleague from the workplace) cancelled his plan at the last moment.

The Gangotri to Gomukh trek is a 2-day trek taking you to the origin of Gangotri Glacier from where Bhagirathi River originates. The Gangotri glacier height, despite continuously retreating, is expected from 4120 to 7000 m.a.s.l (depending upon the time of the year). This glacier is about 30 km long and about 4 km wide.

Other than being my first solo-journey, it was my first trekking experience too, and as I remember, I was hopelessly out of form. And screaming hard of my clumsy incompetence was my pair of sneakers. 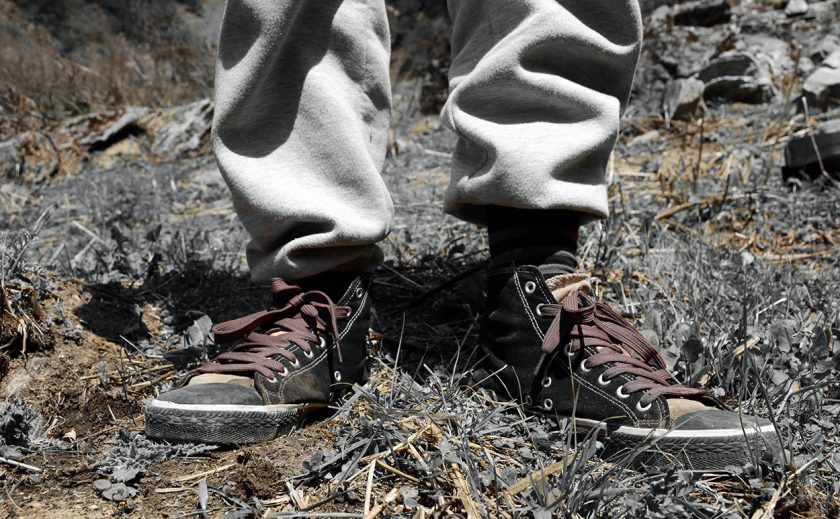 But what the heck! I came all the way from Delhi to Gangotri to do this 2 day Gangotri to Gomukh trek, and I was going to do it!

All over India, particularly in New Delhi, people would be dragging themselves to work, at that moment. They would be stuck in traffic jams, wreathed in exhaust smoke. But I was going for a walk in no man’s land, where nature only ruled. I was more than ready for this.

Update June 2020: This Gangotri to Gomukh trek I did was done in 2015. By 2020, I have done a lot of treks across the Himalayas, most of which are done solo. I have also done solo motorcycle rides in the Himalayas, including my solo Shinkula Pass and Spiti Valley bike trip. I have moreover done many treks like Sach Pass and others. I am primarily into solo riding, trekking and camping. Having said that, I am no rookie anymore. 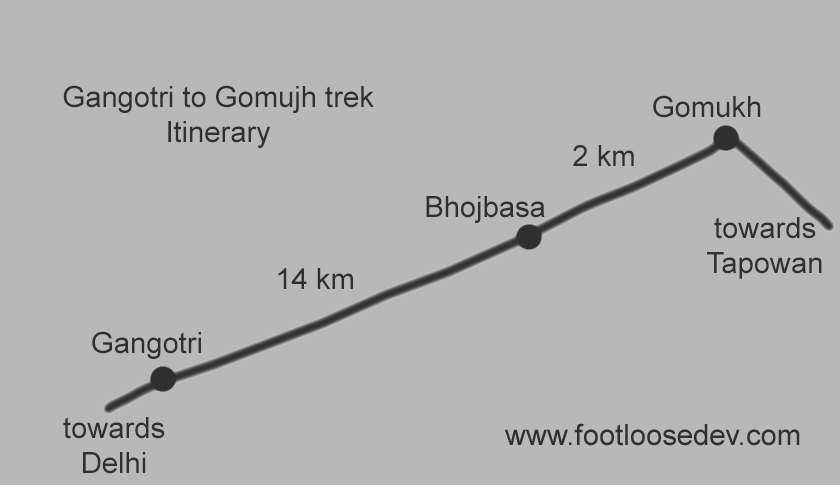 Our first destination of Gangotri to Gomukh trek was Bhojbasa where we were going to halt for the night.

The trek from Gangotri to Bhojbasa is 14 km. It starts at the front courtyard of the Gangotri temple, followed by a steep climb of around 100 steps which leaves you pretty much exhausted before you even start. But once you’re done with it, you are left with pretty much a gentle uphill climb.

My first day of the trek was hell. First days on trekking always are, especially if you haven’t done this before, or you’re not physically ready.

In about an hour, I realized that I was hopelessly out of form. My backpack weighed too much. Every step was like a struggle. But I pressed on.

During the entire Gangotri to Bhojbasa trek, I trudged for perhaps a few hundred feet up and down the hill, before taking a short break, bug-eyed, breathing hard, heart like in some sort of haste trying to find some life in it.

I was falling behind and was surely panting harder than anyone else.

When you’re walking with a group it generally happens that one or two people would start hobbling very soon and fall behind – in this case, it was me.

In the beginning of our Gangotri to Bhojbasa trek, the rest of the crew members waited for me to catch up, bitching every step of the way and looking innocently at me, condoling for my immediate uncertain future. But eventually, they gave up, leaving me all alone.

Though I have always advised Gangotri to Gomukh as a minimum 2-day trek, Lonely planet says that it is possible to do Gaumukh Glacier as a day trip from Gangotri, but you’ll have to set out as early as you can and it’ll be rushed. The park is moreover open from 6 am to 6 pm only. 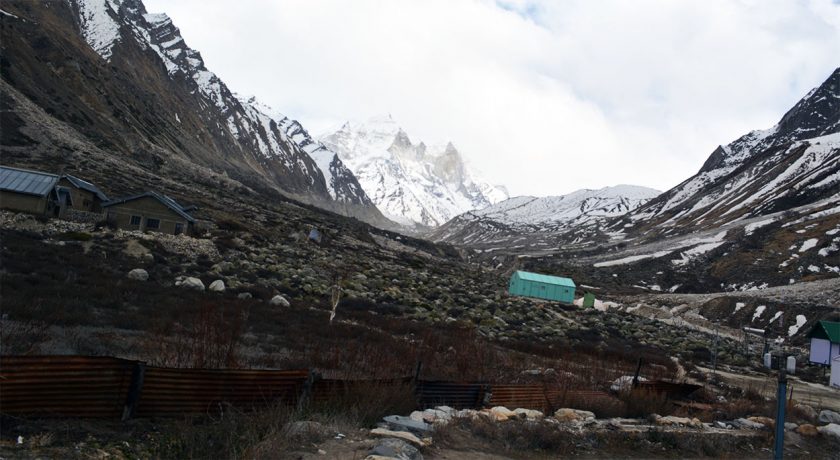 The 14 km Gangotri to Bhojbasa seem little but they’re not.

Once you are halfway your body starts giving up. Moreover, the very fact that you can still give up and walk back to a nearest comfy guesthouse, sleep in the bed and rest is just pure demotivation right in front of you. I mean you’re not in the army and there’s no pressure on you to keep walking like a poor, sad schmuck.

We walked almost the entire day on day 1 of our Gangotri to Gomukh trek and made only 2 halts that helped me to keep up with the rest of the group. 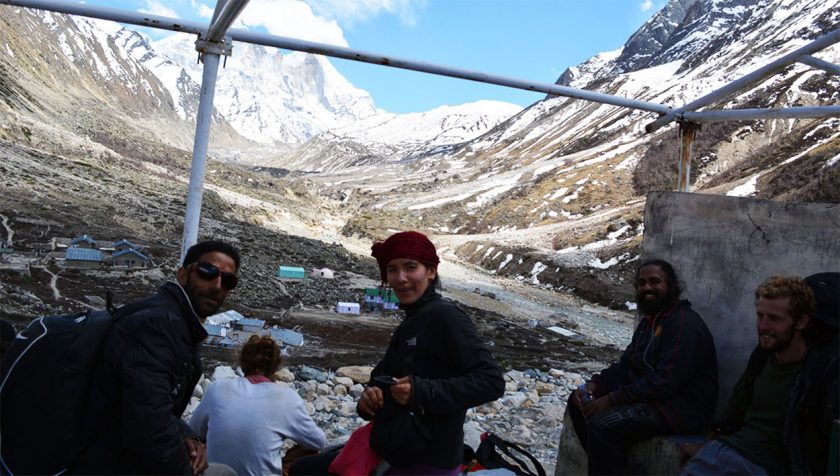 Exhausted, nearing my demise, we reached Gangotri to Bhojbasa just before the sunset.

Bhojbasa has a couple of establishments for a halt on your way to Gomukh – Lalbaba’s Ashram and GNMV’s Guest House.

Travellers can also pitch their own tent and pay a minimal fee of 100 Rupees a night. So if you’re travelling on a budget looking for cheap travel accommodation in India, I suggest you carry a tent for your Gangotri to Gomukh trek.

We stayed in Lalbaba’s Ashram for around Rs350 per day, including accommodation and food – which was a pretty sweet deal.

Surrounded from everywhere with elegant mountains and Glacier, Bhojbasa is like an untouched beauty in the lap of the Himalayas, which takes all your tiredness away the minute you reach there. The snowfall in the night while you’re heating yourself up around a bone-fire, as we experienced it, makes it even more awesome! 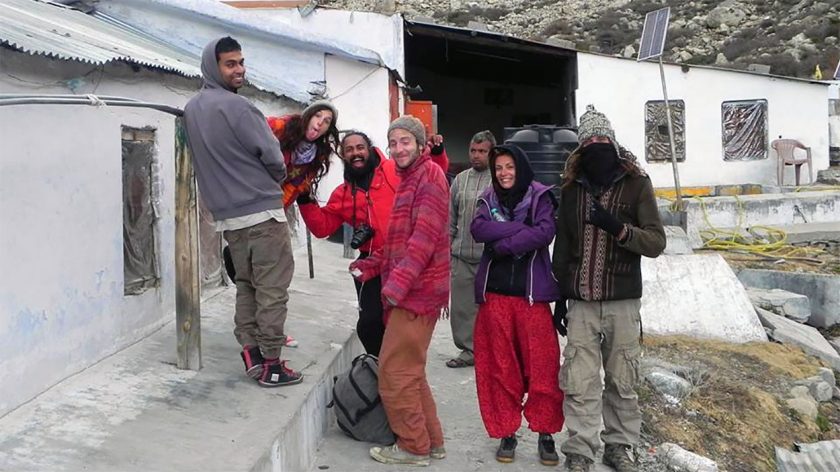 Day 2: Bhojbasa To Gomukh To Gangotri

When I left the comfortable cosiness on day 2 of our Gangotri to Gomukh trek, at around 6:00 AM and peeked from the window I saw the sun being already popped out, filling the world with encouraging brightness. But as I stepped outside to check out the air, I found the cold startling, like a slap to the face.

The wind was still bitter. The snow from the last night – like tiny spheres of polystyrene – was still chasing around the swirls. Well, that’s what you expect from Bhojbasa.

After completing the get-ready ceremony and filling our hungry stomach with Porridge, we headed continued our Gangotri to Gomukh trek.

The sun was shining and the sky was a hearty blur, but everything at the ground level was either damp or wet – and the cold was unyielding. 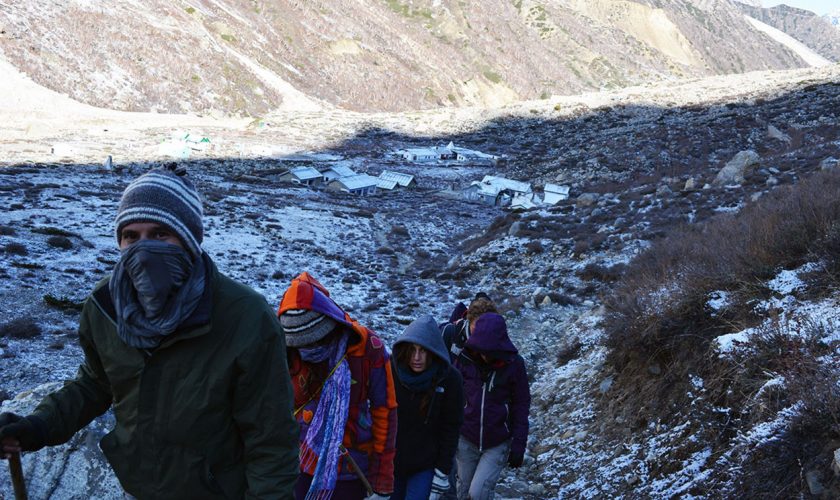 Bhojbasa to Gomuk trek is no definite trail, which leaves you to find your way through the glacial moraines and rocky boulders all by yourself.

The Gomukh glacier is the source of Bhagirathi (Ganges). Due to its religious significance some people, who have balls of steel, even find the courage to take a dip in the bone-chilling water.

I was definitely not one of those. But somehow I managed to pull myself together and sprinkled Ganges water all over myself. I am sure I heard somewhere that it gets counted as taking a dip in the water – and I believed that – with all the absolute faith in me. 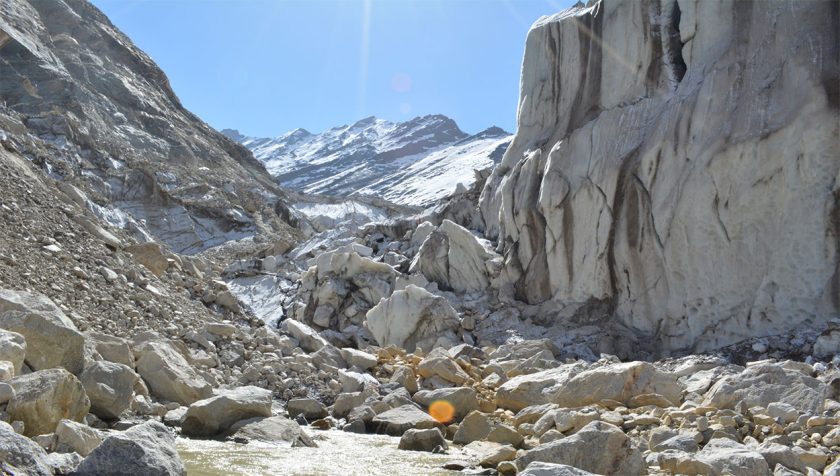 It takes around 3 hours to complete your Bhojbasa to Gomukh trek and arrive back in Bhojbasa.

We arrived at Bhojbasa around 10 am.

Without wasting any daylight we picked up our backpacks from the Ashram at Bhojbasa and started our return journey from Bhojbasa to Gangotri.

It was comparatively easy to walk back towards Gangotri because we majorly had to go downhill. But I still felt all weary and tired. I don’t remember exactly how many times we stopped on our way to catch our breath, maybe because my feet were sucking all the Glucose in my body in assisting my slowness and thus my brain went on some temporary hibernation mode. But in about 4 to 5 hours the entire group made it from Bhojbasa to Gangotri.

At that time I had no idea that this 2-day Gangotri to Gomukh trek – which I completely loathed at times – is going to inject me with a travel bug. A bug so troubling and sedating that it led me to quit my job to travel. 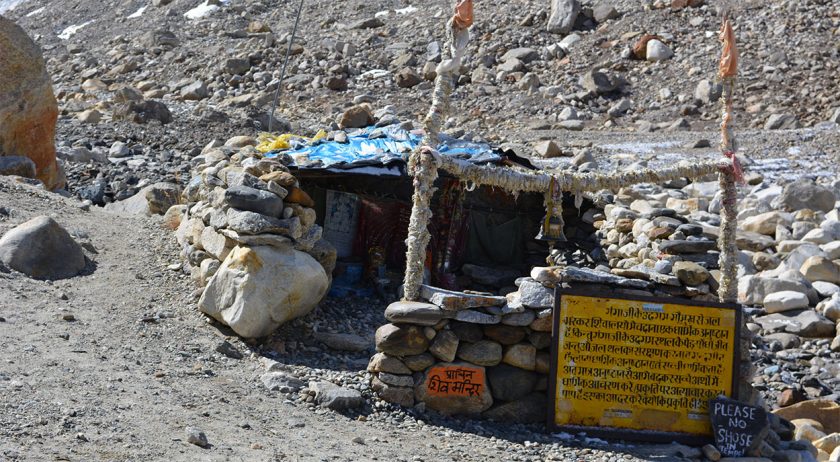 On my Gangotri to Gomukh trek, I saw some of the most dreaded plastic waste material including plastic Coke bottles and instant noodle wrappers. At places, a huge pile of such non-biodegradable plastic waste was simply lying, god knows since how long. I request everyone reading this post – please don’t pollute Himalayas because the very idea of waking up to the bright skies with spectacular views of the Himalayas and A RUBBISH DUMP lying next to you, is not very striking. It spoils the freaking view altogether.