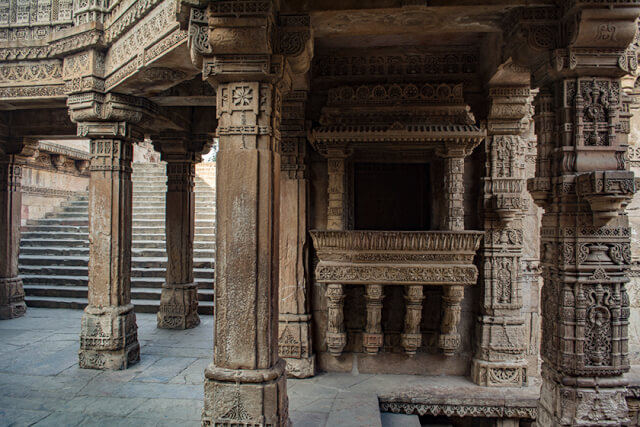 Located at about 12 km outside of the north end of Ahmedabad city, Adalaj ni vav is one of the prominent historic establishments. It is many tourists’ first choice to see a stepwell in Ahmedabad.

Other than its impressive ancient structure, what distinguishes Adalaj stepwell from any other stepwell in Ahmedabad is its spectacular mix of Indo-Islamic architecture and design.

And that’s not it. Its completion speaks of a story that goes in the usual Bollywood style of the bygone days – containing a bit of love, war, and hatred. No wonder, it is one of the top tourist places in Ahmedabad.

Honestly speaking, I found it just as beautiful a highlight as many other tourist destinations I visited not just in Ahmedabad but in entire Gujarat, including the popular Lakhpat Fort and Vachhraj Temple in Little Rann of Kuch. 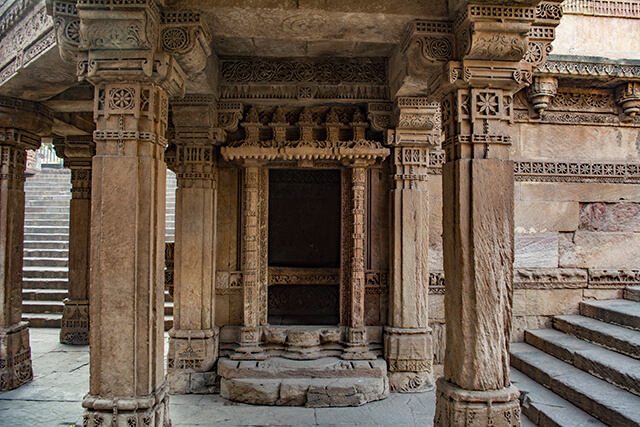 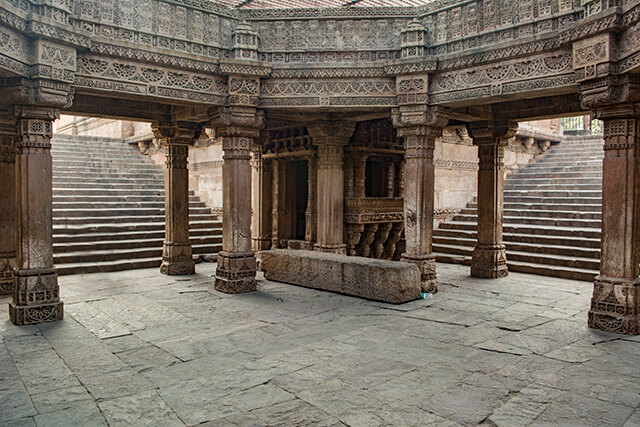 According to the legend, Adalaj ni Vav was originally commissioned by King Veer Singh, of Vaghela dynasty, during the early 15th century. King Veer Singh was the then ruling king of the town. But before its completion, Veersinh got into a fight with the neighbouring King of Mehmud Begada and lost his life. As a result, the construction work for Adalaj ni vav stopped.

When King Veer Singh’s wife Rani Rudabai got the news, she vowed to complete the stepwell and schemed to trap King Mahmud Begada. She made King Mehmud Begada fell in love with her. When King Mehmud proposed her, she agreed to get married, but on a condition that he would finish the pending work of Adalaj stepwell.

Soon after, the work of Adalaj ni vav continued, keeping the original style unchanged. However, since King Mahmud was a Muslim ruler, he added a bit of Islamic influence on the architecture.

As the stepwell got completed in 1499 in Ahmedabad, and King Mehmud asked her to finally get married. Rani Rudabai jumped into the vav and committed suicide. 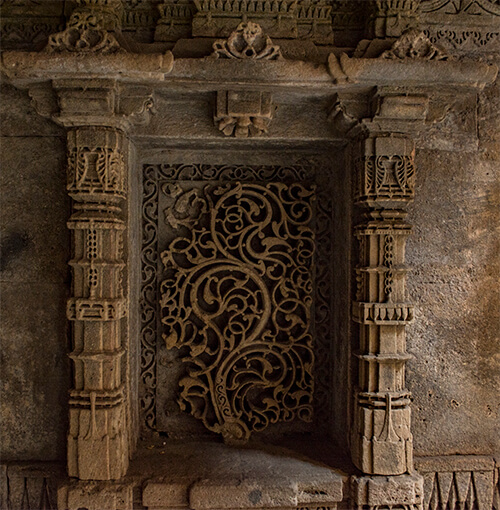 Adalaj ni vav is a spectacular example of Indo-Islamic architecture. Its walls depict Islamic floral patterns seamlessly fused into Hindu symbolism embodying the culture and ethos of those times.

Another remarkable feature that sets Adalaj stepwell in Ahmedabad apart from any other stepwell in Gujarat, is the three entrance stairs. All three stairs meet at the first level, underground a huge square platform, which has an octagonal opening on top.

There is an opening in the ceilings above the landing which allows the light and air to enter the octagonal well. However, direct sunlight does not touch either the water or any of the five stories, except for a brief period at noon. Some researchers say that the atmosphere inside the well is six degrees cooler than the outside.

Note: The visiting hours for the stepwell are between 8 am to 7 pm only. However, the best time for a visit Adalaj ni Vav would be early morning, before it gets crowded. 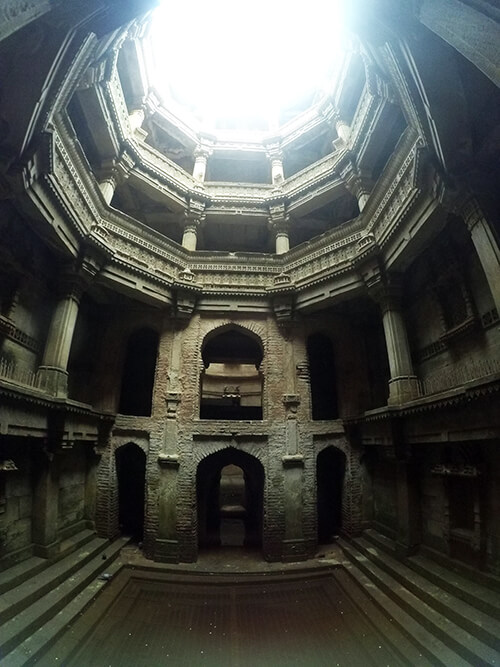 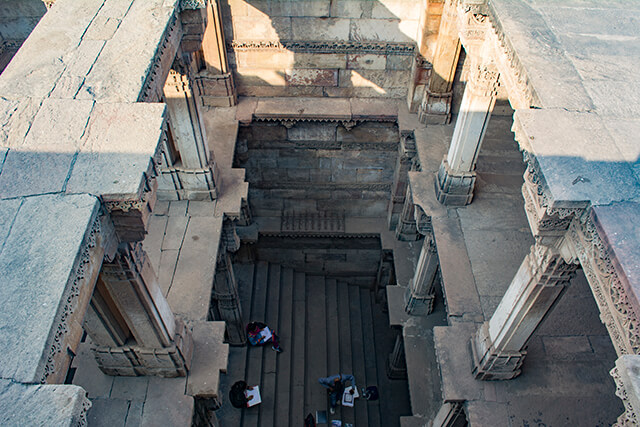 Stepwells can be found across western and southern India, starting from Karnataka, to Maharasthra, to Gujarat, to Rajasthan, though they’re being disappeared every moment. Even Madhya Pradesh and Delhi have a few stepwells. The town of Ahmedabad has three stepwells.

Other than acting as stored drinking water, they used to provide a resting place to travellers and prevailed as a place for socializing. It is believed that more than 200 step-wells can be found alone in Gujarat – making it easy to imagine their numbers in the bygone era.

Although they were secular in nature – meaning anyone could use them – the sanctity of water drove the benefactors to incorporate religious icons into the structures, making some of the vavs an extraordinary heritage sight.

How To Travel Adalaj ni Vav

Given you are already in Ahmedabad, the best way to travel to Adalaj stepwell is in a tukuk. I was staying at Dhal ki Pol, very close to the train station in Ahmedabad, and I took a tuktuk to the stepwell for less than 100 Rupees. This was when the stepwell was more than 20km away. Unlike in other big Indian cities like Delhi and Bangalore, tuktuk drivers in Ahmedabad don’t rip off.

If you want to travel on a lesser budget, you can take a public bus to Adalaj circle and walk from there.

If you will see it on Google map you will see that Adalaj ki vav is actually located halfway between Ahmedabad and Gandhinagar. Having said that, if you are travelling from Gandhinagar, you do not need to go to Ahmedabad.

The five-storey building of Adalaj ni Vav is all built using real sandstone, with beautiful carvings done on them. Its octagonal shape represents a strong Solanki style architecture that is not rare to see around Gujarat and parts of Rajasthan.

Al the floors in Adalaj ni Vav have enough space between them for people to congregate and sit and relax. Its grand structure also helps in keeping the airflow and thus keep the temperature inside the stepwell cool. Proper consideration is moreover done to keep enough light vents.

From the first story, there are three staircases that lead all the way to the bottom floor. The bottom floor has access to groundwater. Despite seasonal fluctuations in water, it is believed that Adalaj ni Vav never goes out of water. Though today the water is very much contaminated, one can still find it in enough quantity, catering the needs of birds and bats.

Speaking of the intricate design and carvings, one needs hours, or perhaps days to read them all. The ‘tree of life’ remains the most popular intricately carved design. Another interesting An interesting depiction carved from a single block of stone is of the Ami Khumbor.

Where the motifs of flowers represent Islamic influence, the symbols of Hindu and Jain gods say a different story. One of the carvings that I personally found most interesting was of the elephants having the same size but different design. Some of the walls can be found with women performing different daily chores like churning out milk, dancing and more.

Again, Adalaj ni vav can be visited anytime between 6 am to 6 pm. There is no entry fee for visiting the stepwell.

Did you find this blog on Adalaj stepwell useful? Do you think I have missed an important detail worth mentioning? Please share your thoughts in the comments below and help others plan their trip better.

Also read, other places to see in Gujarat in this Gujarat Travel Guide.

If you don’t want to visit the whole of Gujarat, I have a dedicated blog on Kutch region too that I wrote after my nearly 20-day backpacking trip around the region. You can read it here: Kutch Travel Guide