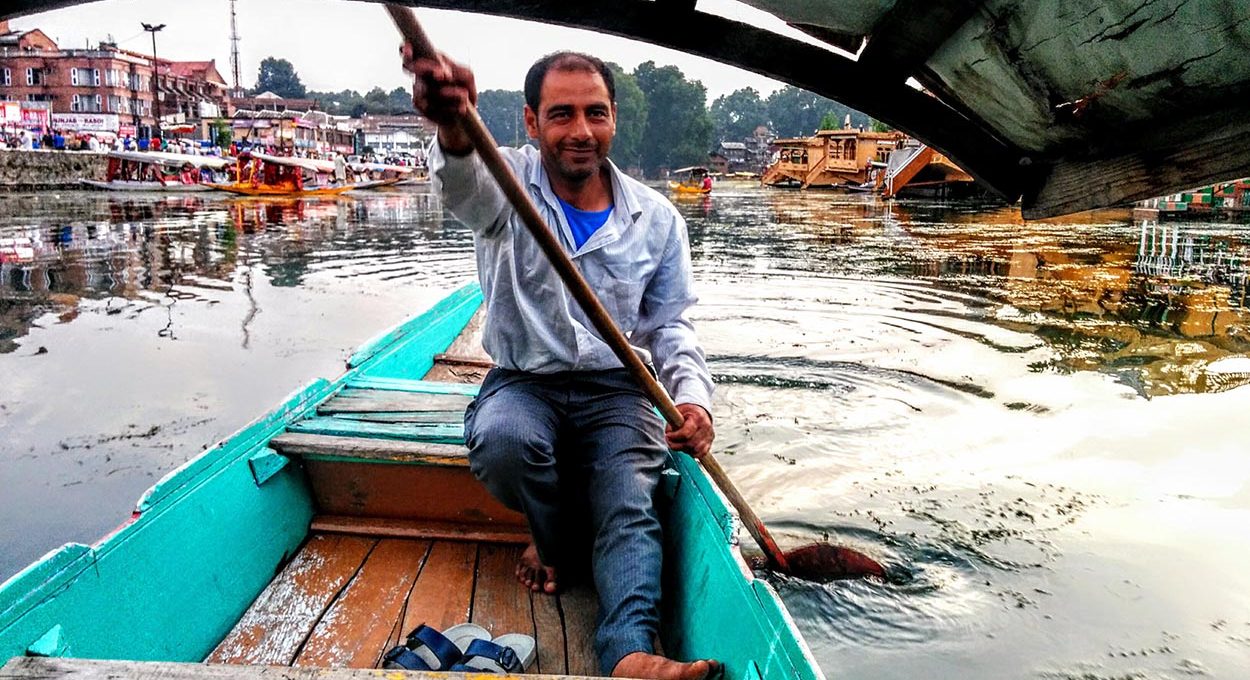 If you are planning a solo trip to Kashmir or Srinagar in particular, you need to read this travel blog.

In this blog, I have shared the reasons why I didn’t like the experience personally.

Other than my experiences, I have also shared some useful practical information too. This includes travel tips like how to travel from Delhi to Srinagar, where to stay there, what is the best time to travel, the top places to see in Srinagar and so on and so forth. But before we get into the details, let’s talk about my personal travel experience.

If you are not interested in reading about my experience on a solo trip to Kashmir, scroll down to a heading that says How To Travel from Delhi to Srinagar. From there, and further below to the end of this travel blog, you will find useful tips.

A Solo Trip To Srinagar, Kashmir

The many houseboats around Dal Lake seemed to be blissfully relaxing, allowing tourists to amicably enjoy the utopian state of Srinagar – a place which once stood with dignity and pride, and was only known for its beauty, or for being a “paradise on earth”, as locals still call it.

But today, the city can hardly breathe on its own. It seems – as you walk around its confusing and mystifying streets – that its very sustenance, now depends upon those wearing Green Camouflage Jackets and Army Track Pants.

A place that was once known as heaven on earth, and once stood with dignity and pride, today, suffocates under its own air! 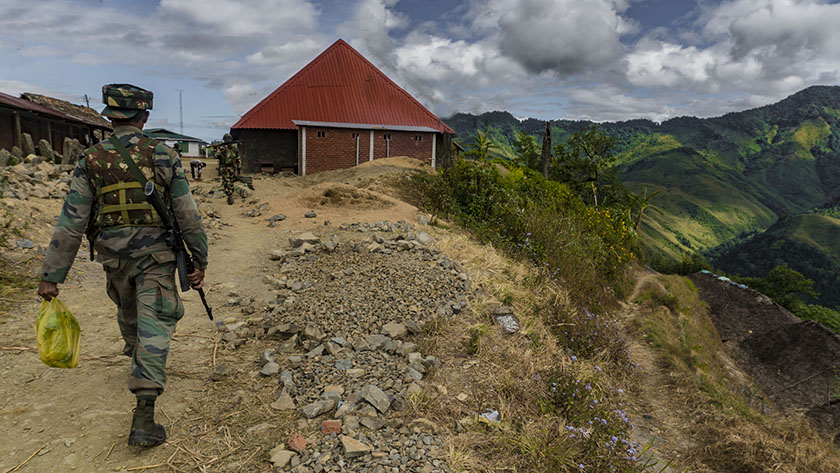 After more than two decades of the cold war and raw politics, and with the Indian army taking affairs into its hands, does the future of tourism in Kashmir and its capital Srinagar look bright? 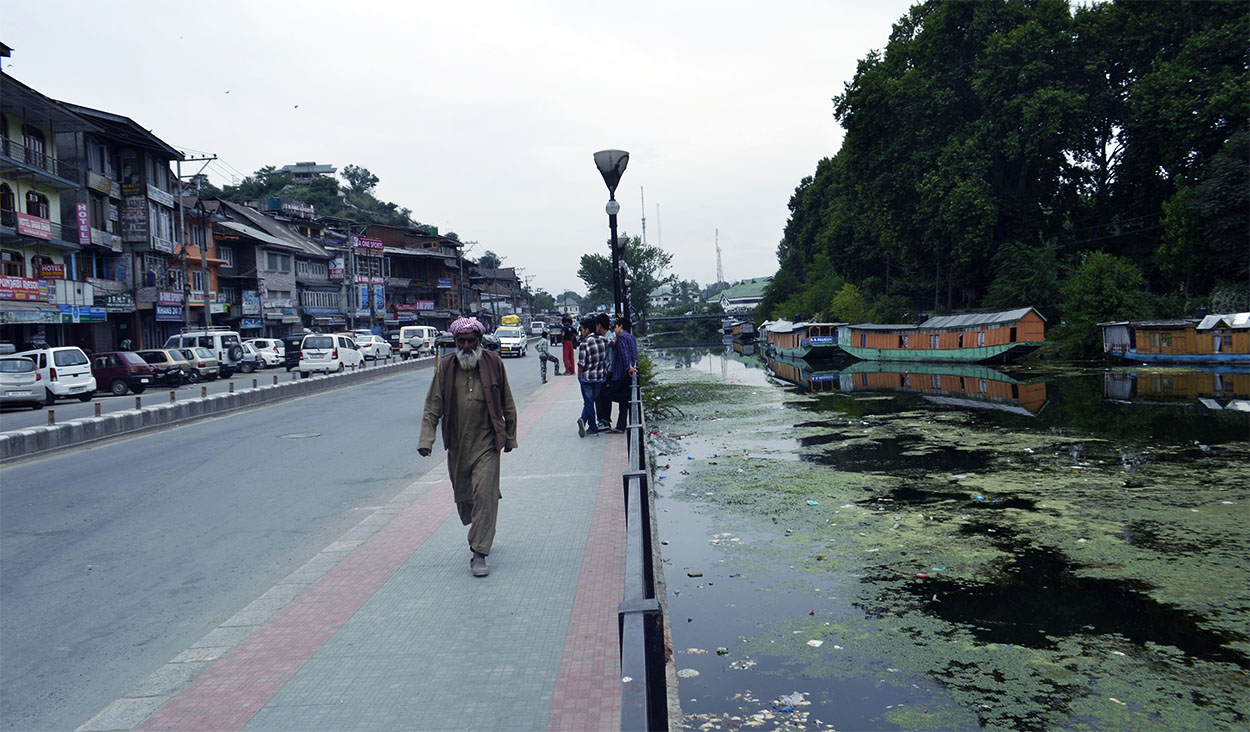 In the summer of 2015 (I revisited this place in 2018) this ill-famous, but popular holiday destination in India – appeared as a biblical wasteland, where army checkposts and AK47s still rule the day.

Even if the town, at large, is declared safe, there’s always this fear and trepidation in your heart that suppresses the very tourist in you.

Though I am not claiming that Srinagar is not safe to travel or that you should not have a solo trip to Kashmir – as is often advised – but when you’re here, a part of you is much aware of the insurgencies that keep happening in this region, you don’t feel that springy keenness to explore a place so striking and beautiful. 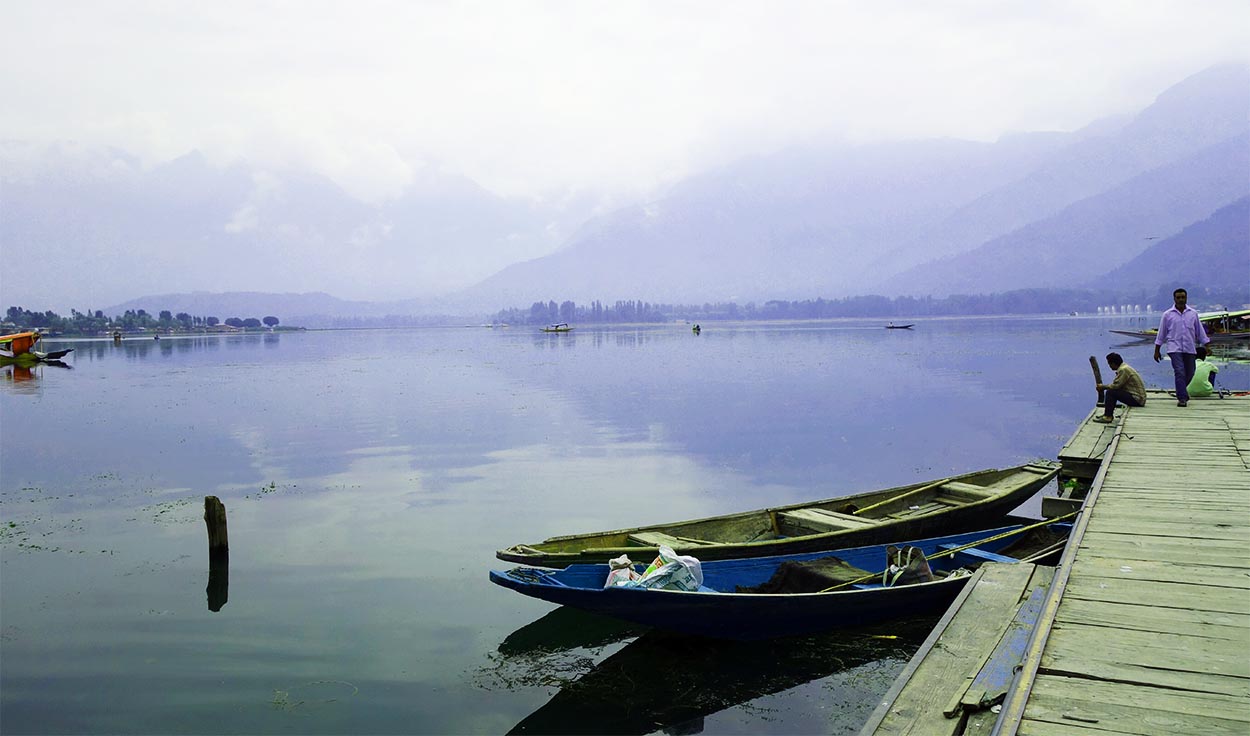 The Dal Lake in Srinagar is the real draw. And the experience of paddling slowly around it on a Shikara, birdwatching, is a highlight.

But if you can drag yourself away, there are many places to see in Srinagar – from some of the most beautiful lakes (which, unfortunately, are some of the dirtiest too) to the prettiest mosques in India including Khanqah of Shah-Hamdan, which reveals the roots of central Asian Muslim community like no other mosque does. And if that doesn’t interest you, the neighbouring town of Sonmarg and Gulmarg – which have always ruled the Indian film industry, with their superimposing beauty – would definitely do. 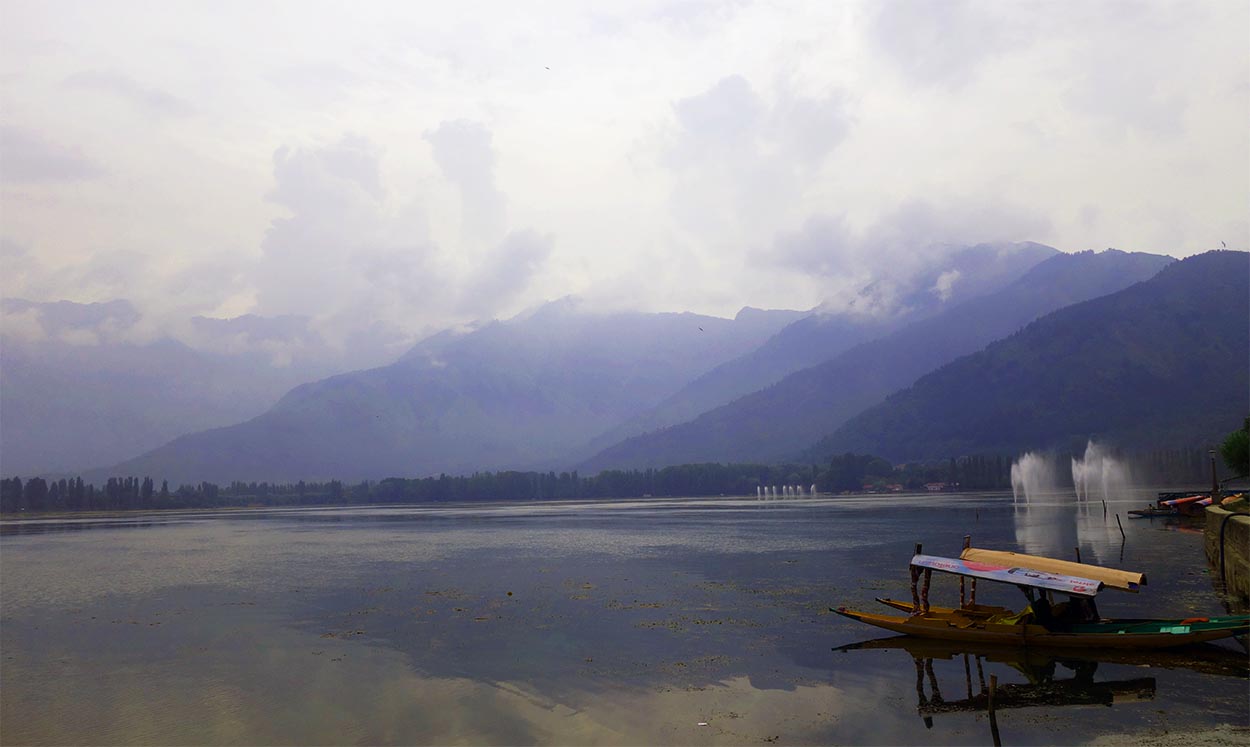 You can also rent a houseboat in Dal Lake for as much as 800 Rupees a night, one of the safe places in Srinagar for tourists. But if you look a little further you’ll find the Indian army guarding the adjoining streets – something which is a normal day’s routine here. Perhaps that’s why, I preferred a four-walled room, over the charm of sleeping in a houseboat.

My four-walled room was all dusty, as city buses chased each other on the nearby dusty roads. The mountains were close too, surrounding me from every direction, and creating a sense of suffocation. 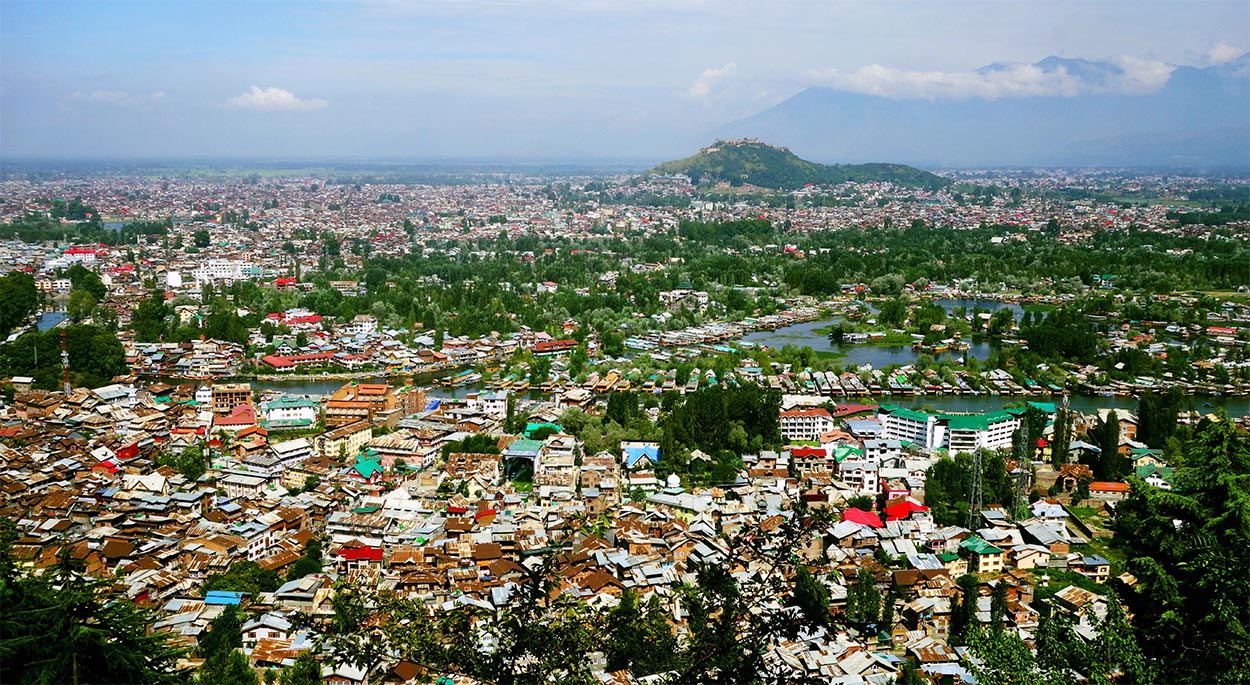 During one of the afternoons, I met a couple of young boys smoking cigarettes in a hidden corner of the famous Botanical garden. It was the time of Ramadan, and of course, they didn’t want to be spotted. A few minutes of chat and a quick mention that I am a Hindu built a sudden assurance among them. They invited me to show the shrouded, little intense parts of the city. “It’s not safe for tourists to come here, especially those who are white,” claimed one of them, as we walked around a few untouched neighbourhoods, leaving me confused if I should be happy for having Asian roots.

I found that whatever’s left of the tourism industry there lies just around Dal Lake. You walk a couple of kilometres away from it, in any direction, and all you see is the emptiness of this place and a bunch of local shopkeepers sitting behind the counter looking wistful, sometimes wary. Or a group of young men indulged in a sad conversation about their people and politics. 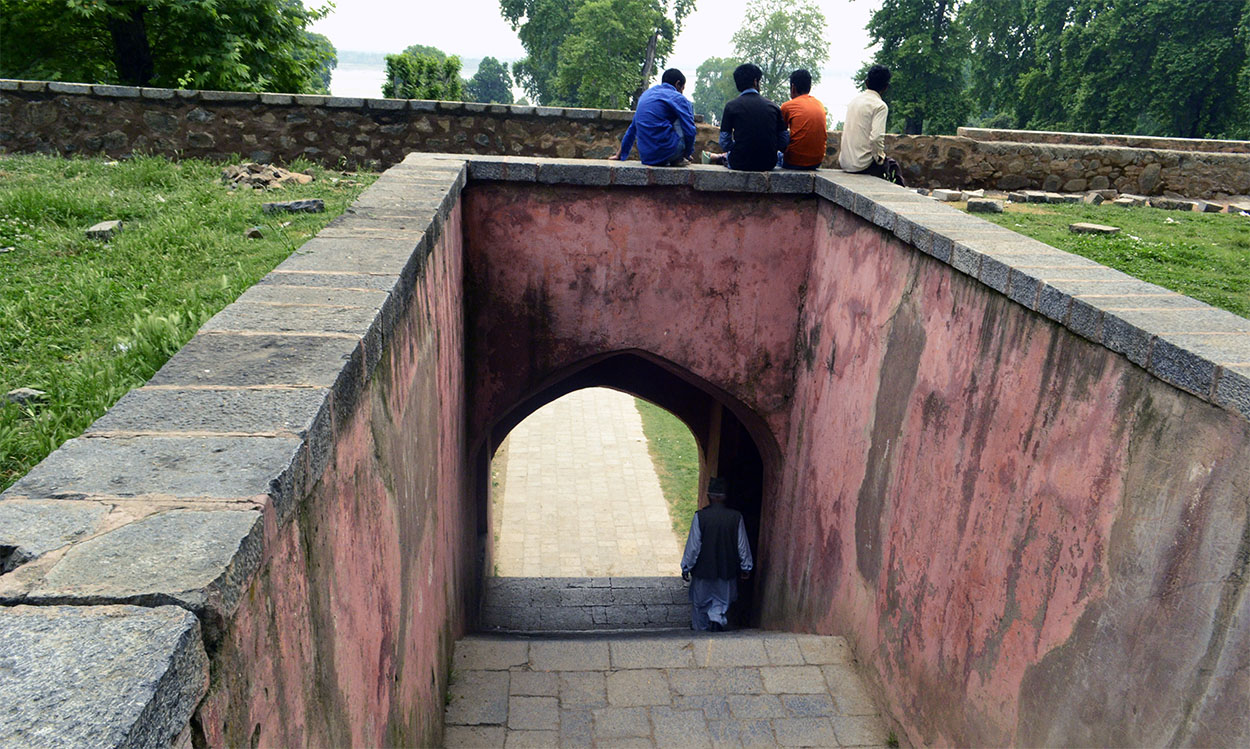 But then again, this place has come a long way to revive itself after more than 20 years of brutal civil war. And that’s the reason why many nations including Japan and Britain, among others, have at least lifted their travel advisories against visiting the area.

But for a solo traveller looking for cultural experiences and a bit of fresh air to breathe, does Srinagar live up to the expectations of being an ideal and blissful state? I don’t think so!

How To Travel from Delhi to Srinagar

Since we have a domestic airport in the city, the best (in terms of time and effort, not money) way to travel from Delhi to Srinagar is by flight. The flights also remain pretty cheap throughout the year. Having said that, even if you are on a budget trip, it makes sense to take a Delhi to Srinagar flight and save yourself a lot of time.

If you don’t want to take a flight and enjoy the journey between the two destinations, it is also possible to travel from Delhi to Srinagar by road. The only problem is, there is no direct connection. Moreover, the journey going to be a little long.

The first leg of the journey will be from Delhi to Jammu which is almost 10 hours. There are many buses leaving from ISBT in Delhi. I suggest you take a J&KSRTC bus as they run on time.

Jammu to Srinagar is a nearly 8 hours journey and the distance between the two destinations is almost 300km. Again, take a J&KSRTC bus. Most of the buses (all the way from Delhi to Srinagar) are overnight buses.

Another way to travel is by train. But since there is no train in Srinagar, you cannot do your entire Delhi to Srinagar journey on a train.

Take a train from Delhi to Jammu. From Jammu, you will have to take a bus.

Places to see in Srinagar

When it comes to tourist attractions in Srinagar, be rest assured that there is enough to see and do there.

Of course, you can visit the nearby towns of Gulmarg, Sonmarg and Pahalgam, but even if not and you want to stay in the town only be rest assured that you will find enough places to see in Srinagar.

Before I start with the list, I want to tell you that other than experiencing the popular Shikara ride in Dal Lake, you can also do a Shikara ride at Nigeen Lake too, for a less touristy experience.

And speaking of the top places to see in Srinagar, here are some:

There are more places to see in Srinagar, but these are some of the popular spots that tourists often frequent.

Is Srinagar Safe To Travel to?

Though we keep hearing in the news that Srinagar is not safe to travel to, I think such is not the case anymore.

In recent times the army has made every effort in making Srinagar a safe place to travel. I travelled there for a few days, sometimes, even going with strangers to wherever they invited me (as you read in the blog above) but never did I sensed any danger. Though it is true that I didn’t feel there as free as I do while travelling in other parts of the country I didn’t find safety an issue. I think it is the news that makes it look otherwise but such is not the case.

So yea, if you will ask me (or anyone who has been there) “is Srinagar safe to travel to?” everyone will tell you the same thing, and that is: Yes, it is!

Is Kashmir Safe To Travel?

For those who don’t have much time, I want to answer the question in one word: Totally.

It was in Kashmir that I even had my first hitchhiking in India episode and I found it totally safe.

Now, to answer the question of ‘is Kashmir safe to travel’ in detail, I want to talk a little about why the problem…

Prior to the partitioning of India in 1947 Kashmir was a princely state with its own ruler. Although the king was Hindu, most of the people living in Kashmir were Muslim, so he wanted to remain neutral. When the treaty happened, Kashmir got a special status within the Indian Constitution. But the vast majority of the Muslim community wasn’t happy about this. Since India is a Hindu-majority state, they didn’t want to be a part of India.

By the late 1980s, dissatisfaction increased due to eroding the autonomy of Kashmir, hence all the problems.

Now, coming back to the question… is Kashmir safe to travel?

Even though there has been regular tension between the government (or military) and the local people, Kashmir is safe to travel for tourists.

I remember when I was travelling in Nagaland, people regularly messaged me and asked if Nagaland is safe to travel to, and I repeated the same thing I said here: for tourists, it is safe! The same applied to Kashmir too.

Is A Solo Trip to Kashmir A Good Idea?

As I said above, you may not feel very free, as a traveller, but there is no problem with travelling solo. As long as you are being careful (and this statement applies to any place in the world) you should have no problem having a solo trip to Kashmir.

That’s all in this blog post. If you have more questions on places to see in Srinagar or whether is Kashmir safe to travel or not, you can write me a comment below!