It has been 4 months today, living in Naggar, Himachal Pradesh, and I feel like a total jerk while writing this travel blog.

Because all this long I never visited Nicholas Roerich’s once private residence turned into an Art Gallery.

For any tourist who visits Naggar, it remains the most popular attraction. Think of it as a bucket-list destination.

The Art Gallery of Nicholas Roerich (who happened to be a very respected public figure and a legendary Russian painter) is his once-private house turned into an art gallery. He lived here between the late 1920s till 1947. 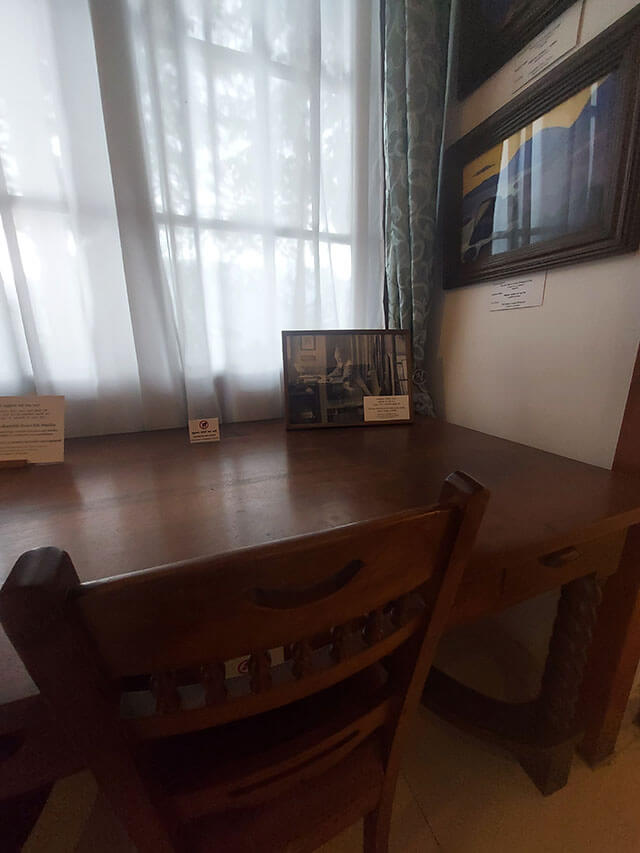 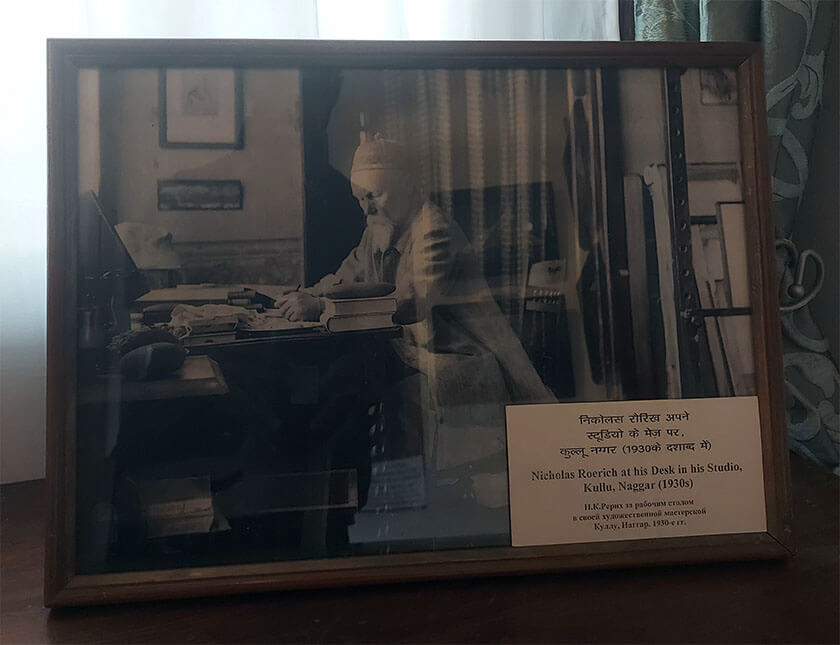 As soon as you enter the premises and walk around the ground floor, the first thing you see is a carefully preserved 1930 Dodge 4-door sedan. 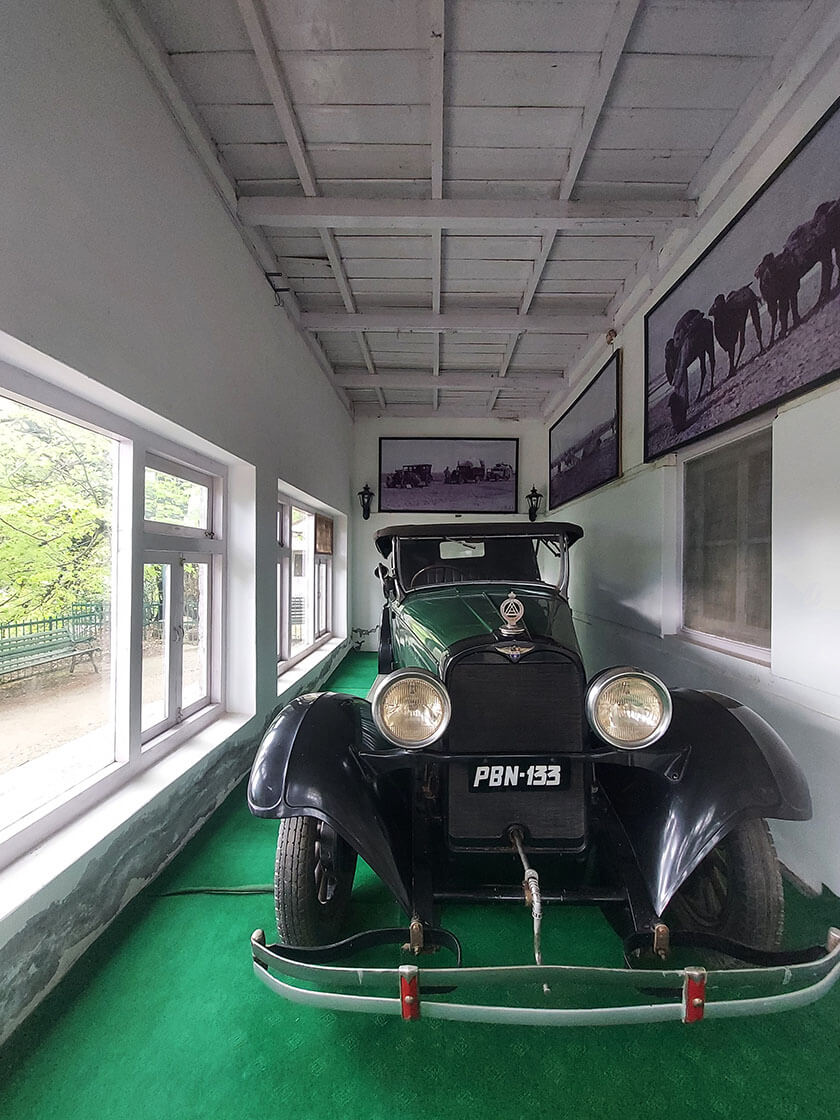 The ground floor is converted into the Roerich Museum, having some of his original art pieces. 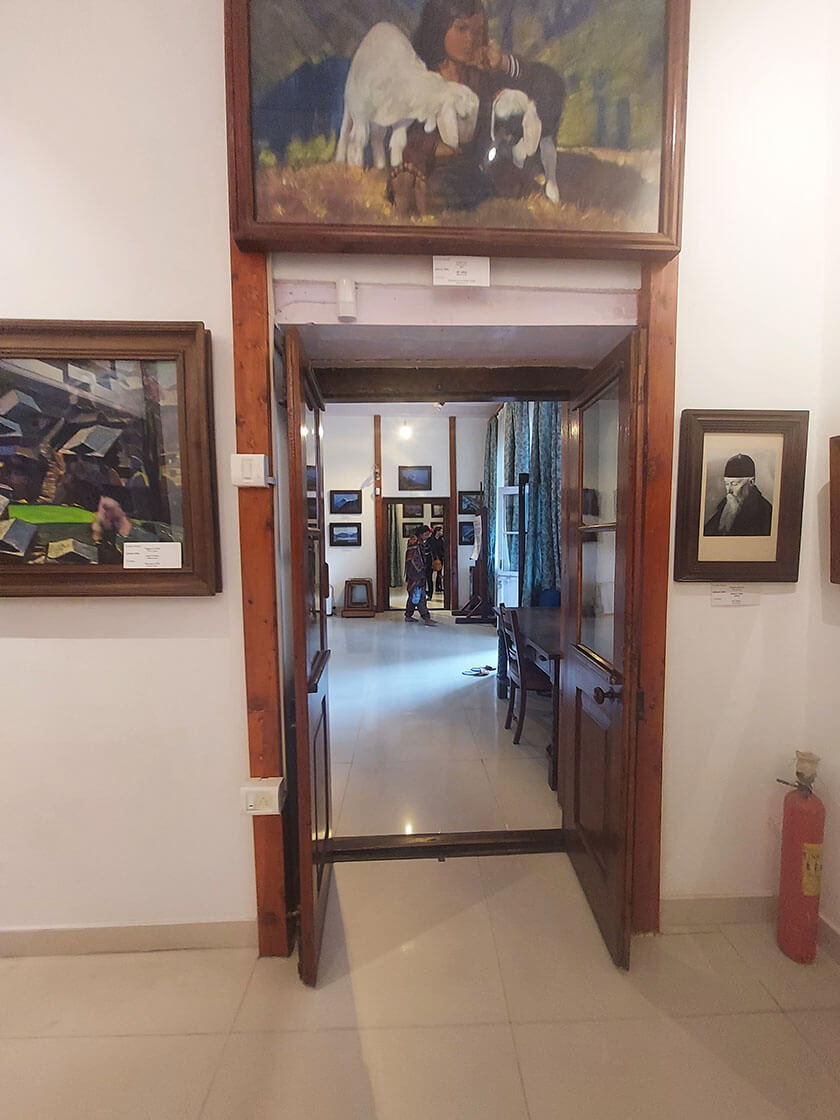 Here’s an interesting interpretation of Tripura Sundari Temple by him that you can actually compare by walking to the temple located 1km away from the Art Gallery (towards Naggar Castle). This painting is also located on the ground level. 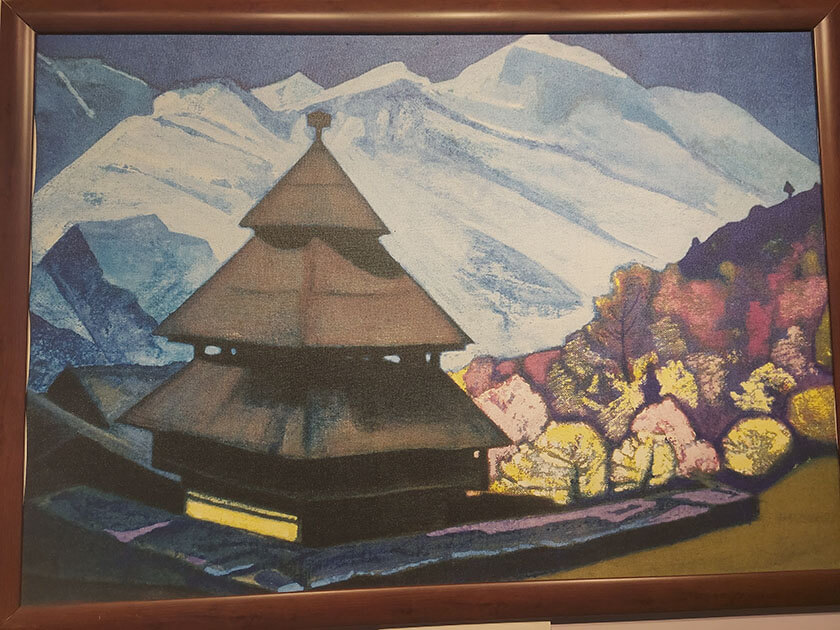 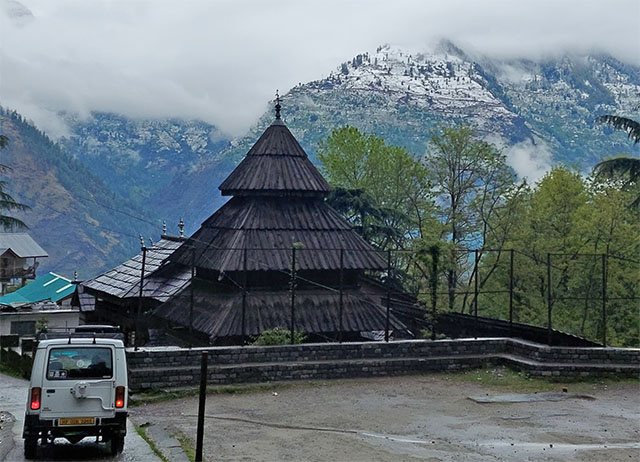 The upper floor, as I said above, is a memorial… an original imitation of his private house, depicting his lifestyle. 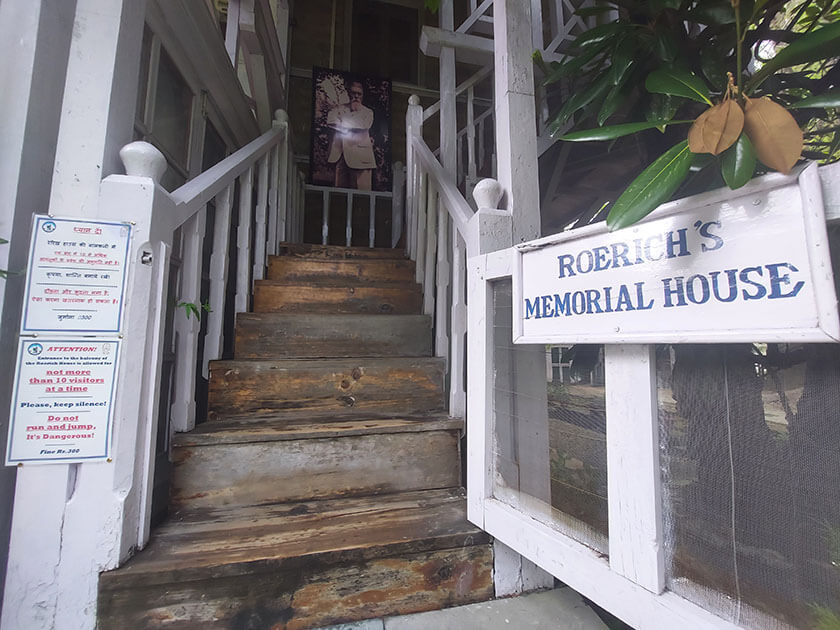 Tourists are free to walk within the rooms on the ground floor that showcases Nicholas Roerich’s paintings.

The upper floor (the memorial house) however, isn’t accessible entirely as it is in a comparatively bad shape. Visitors are not allowed inside the rooms on the upper floor but they can walk around the adjoining balcony and peek through the glass windows. 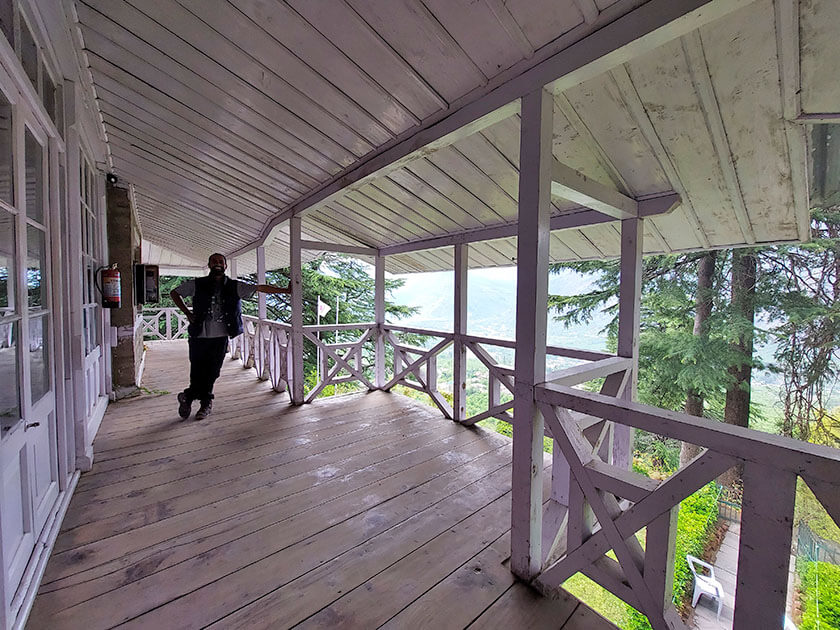 Peeking, they can see some of his original furniture and interiors. 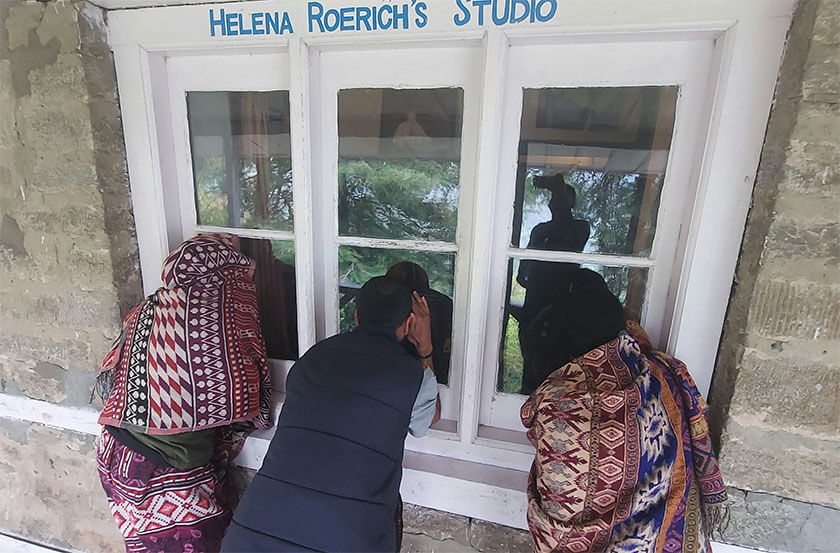 One of the rooms talks about the life of Devika Rani, the wife of Nichola’s son Svetoslav.

After Nicolas’s death in 1947, his son Svetoslav decided to move much of his collection to Bengaluru where he established the Tataguni estate and became an active member of the city’s vibrant art scene. By now Svetoslav was married to Devika Rani, the exquisitely beautiful great-niece of the Nobel Laureate Rabindranath Tagore, and the first lady of Indian cinema.

She has a great role in preserving the Nicholas Art Museum. 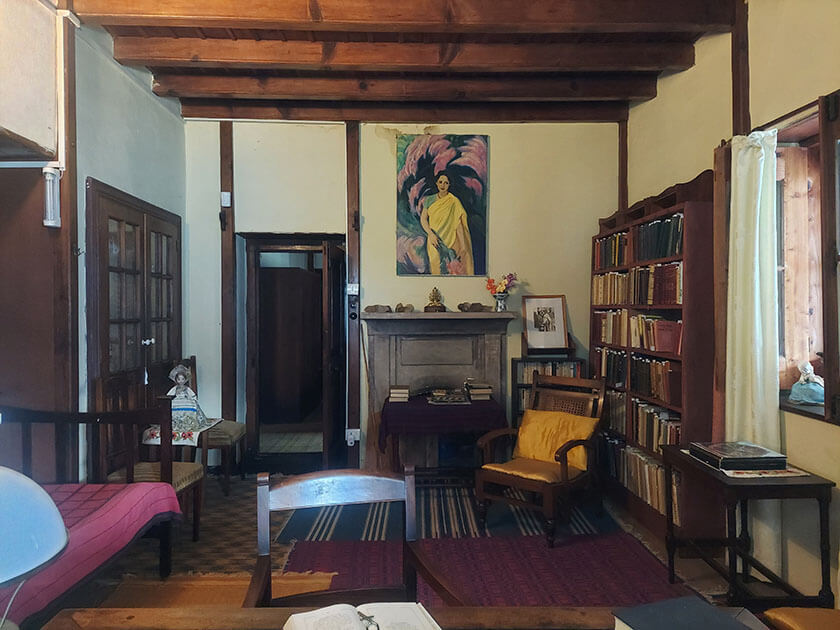 Here’re a few other rooms… 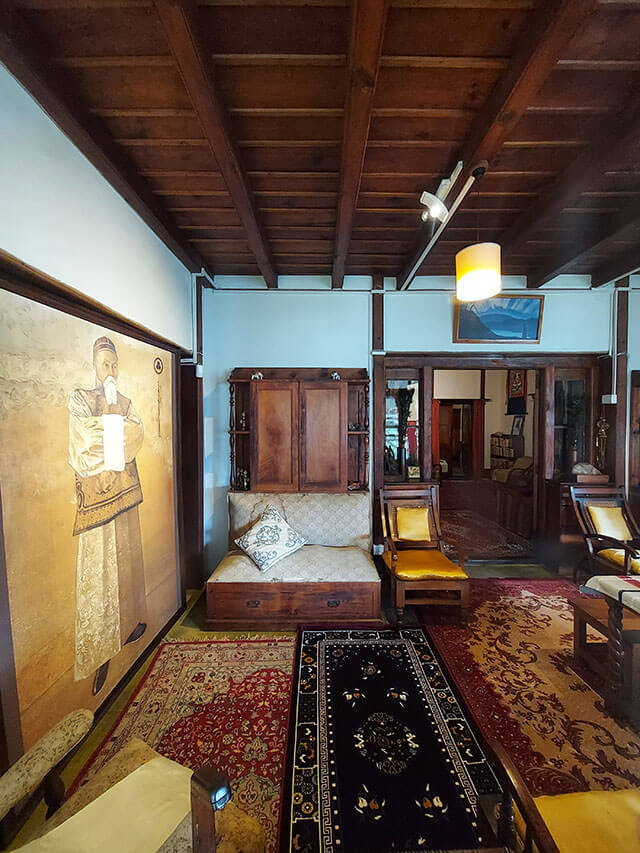 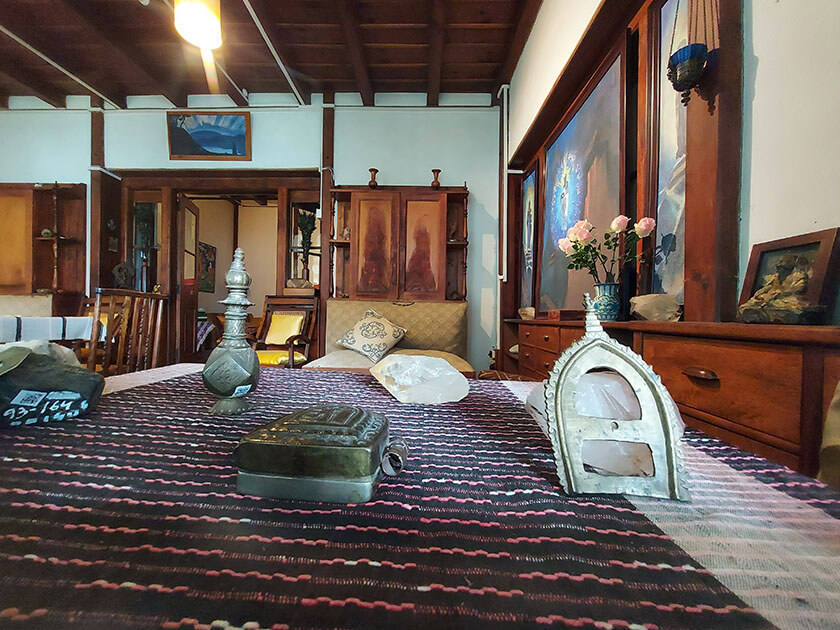 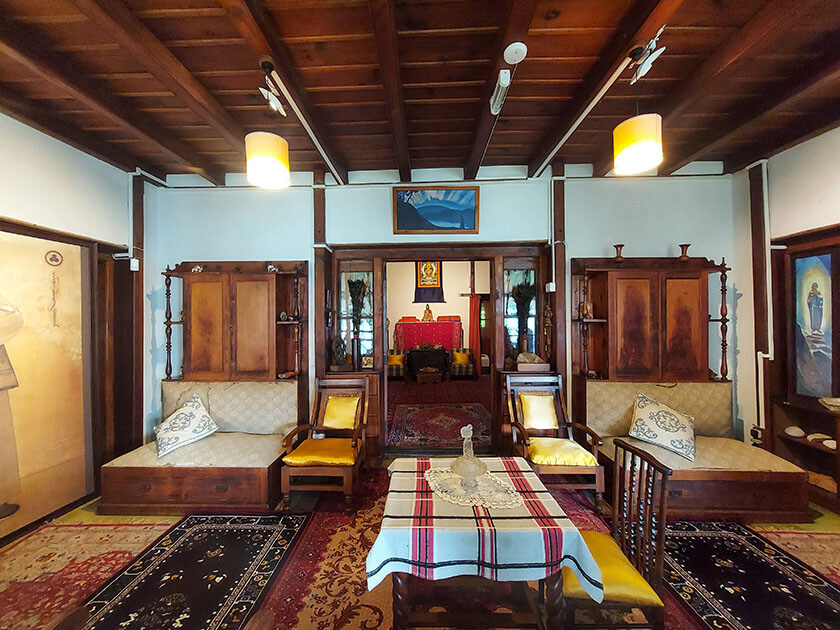 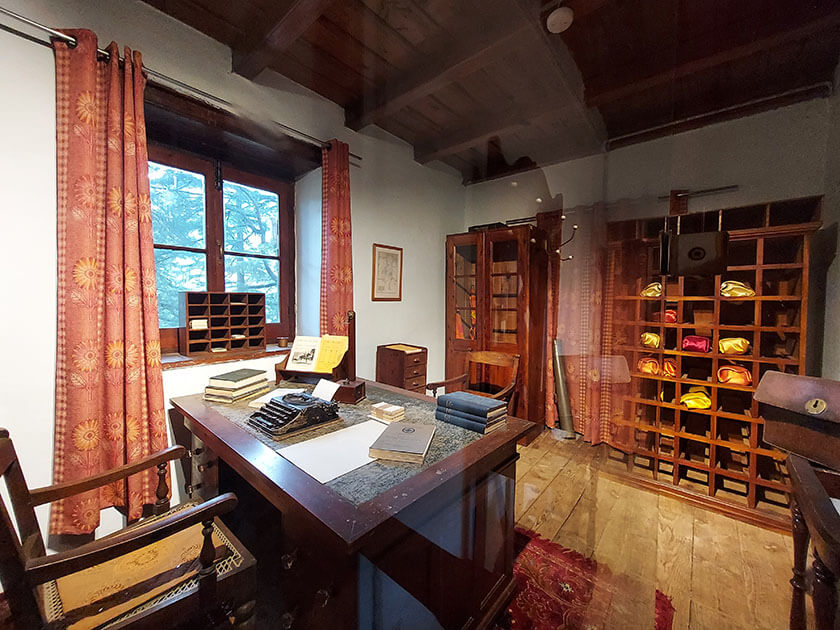 Just like you would like to know how the Raja once lived in Naggar Castle, it is worth taking the time and understanding the lifestyle of such a public figure of our modern times who changed the mindset of and inspired so many lives.

Born in Saint Petersburg, to a well-to-do notary Baltic German father & a Russian mother, Roerich lived in various places around the world until his death in Naggar.

Trained as an artist and a lawyer, his main interest was literature, philosophy, archaeology, and especially art.

Roerich was also a dedicated activist for the cause of preserving art and architecture during times of war. He gave legal recognition to the idea that cultural objects are important and should not be used for military purposes, neither be destroyed in a war. It was called the Roerich Pact. 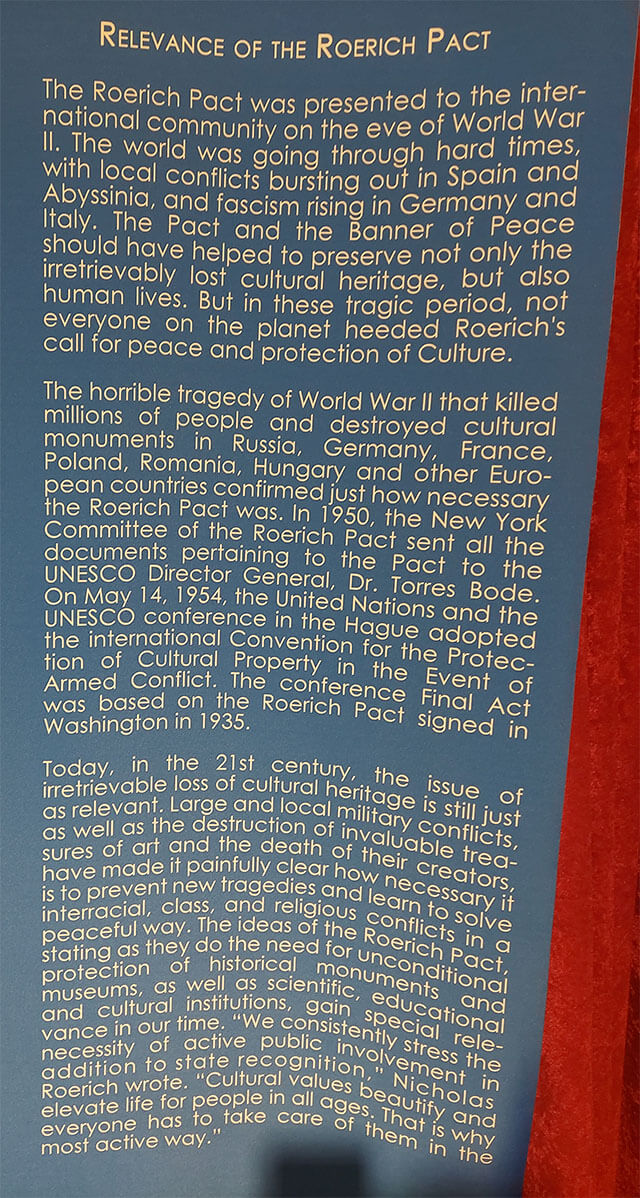 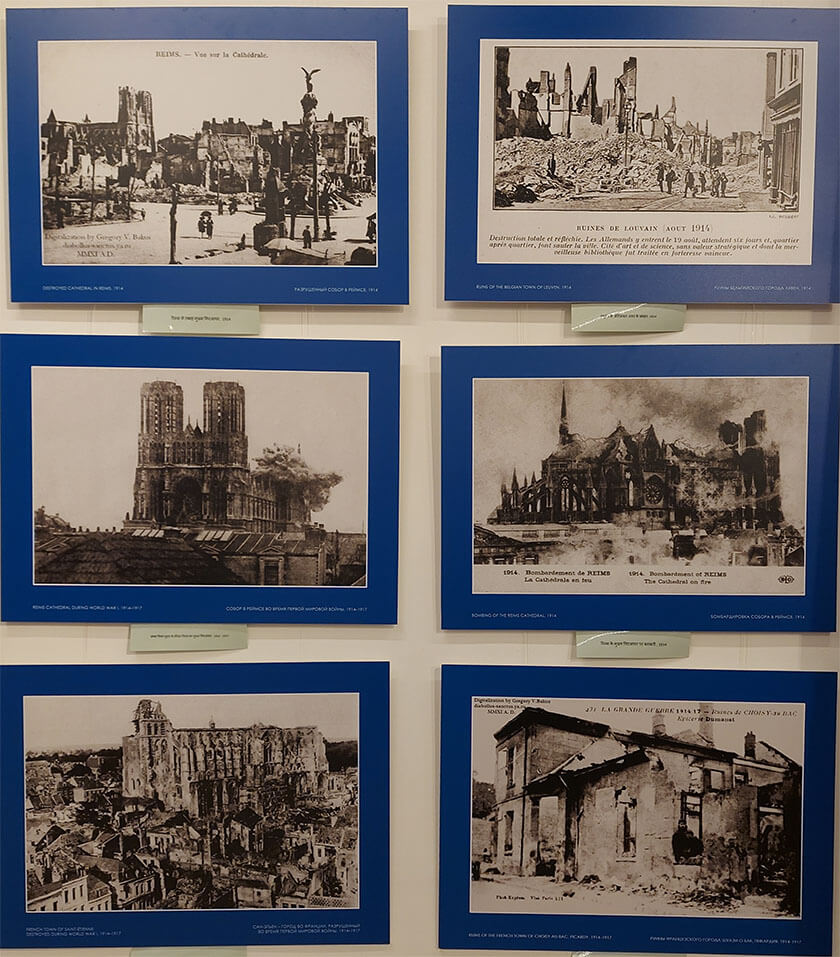 Known as the Master of the Mountains, Nicholas painted almost 7000 paintings, capturing a copious number of scenes from the Himalayas. All these paintings were done from 1923 onwards when he was drawn to the Asian subcontinent. He explored Turkestan, Altai, Mongolia, and Tibet apart from India in his quest to study their religion, language, customs, and culture. 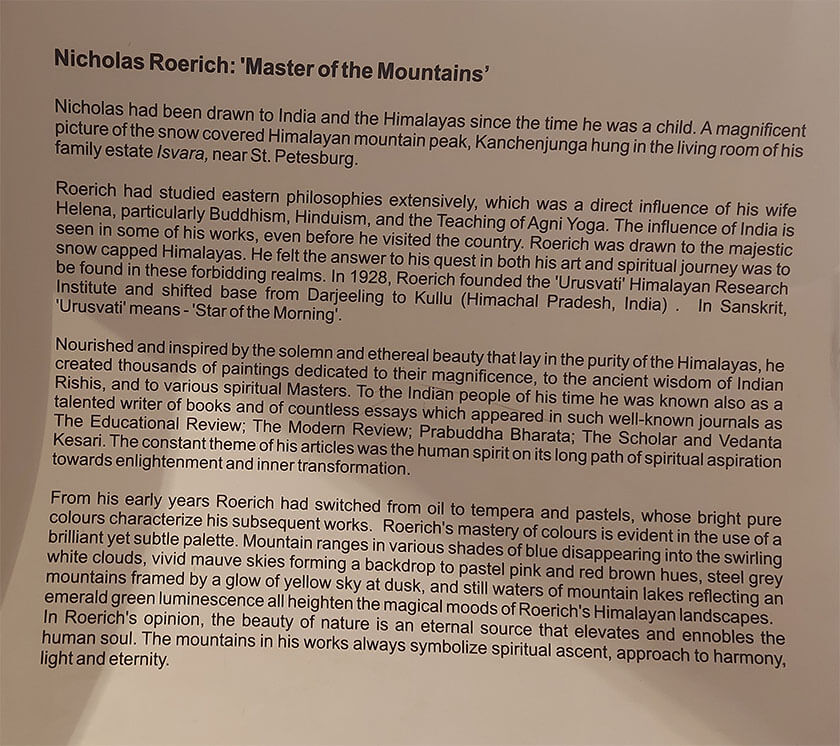 Out of nearly 7000, some 500 paintings were dedicated to the Himalayas. Where most of them depict the awe-inspiring landscapes and mountain ranges, some have inclusions of monasteries, local architecture, and culture. He even documented flora and fauna and folklores. Looking at his paintings, therefore, give a deeper understanding of life within the Himalayas.

In India, he painted about the Lahaul region, in Himachal; Ladakh; parts of Sikkim; and mountain ranges like Kinner Kailash, Mount Kailash; among others. And most of them can be found hanging on the ground floor of Nicholas Roerich Art Gallery in Naggar. 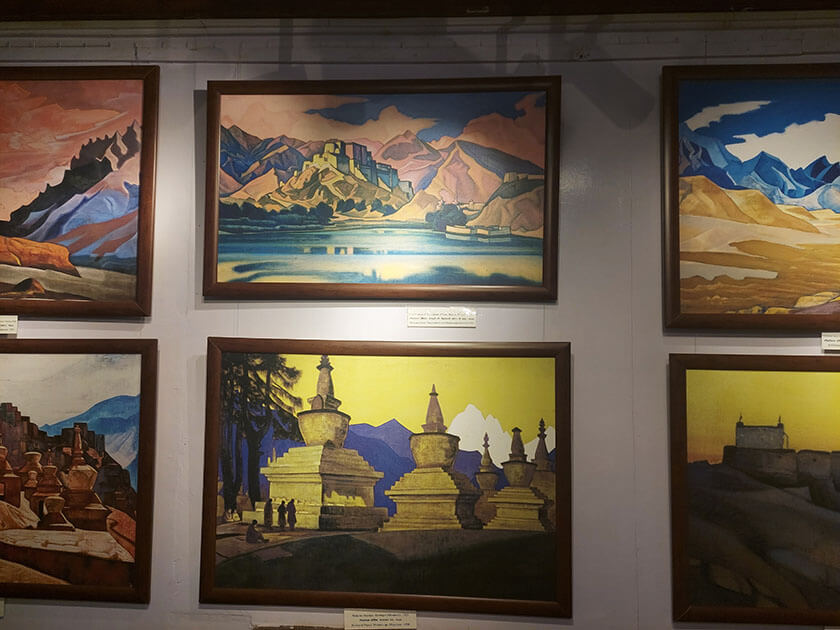 And did I tell you he was even nominated, several times, for the Noble Prize?

So yea, for a man holding such recognition and achievements, if you have their once-residence in your neighborhood and you’re not visiting it, despite being a writer, an artist yourself, you are a jerk! And I feel like one today.

Honestly speaking it isn’t just my fault. “It isn’t worth the 50 Rupees ticket”, I was told. And having my grassroots of a budget backpacker, the statement did make an impression on me. So yea, I never visited Nicholas Roerich Art Gallery, until today! 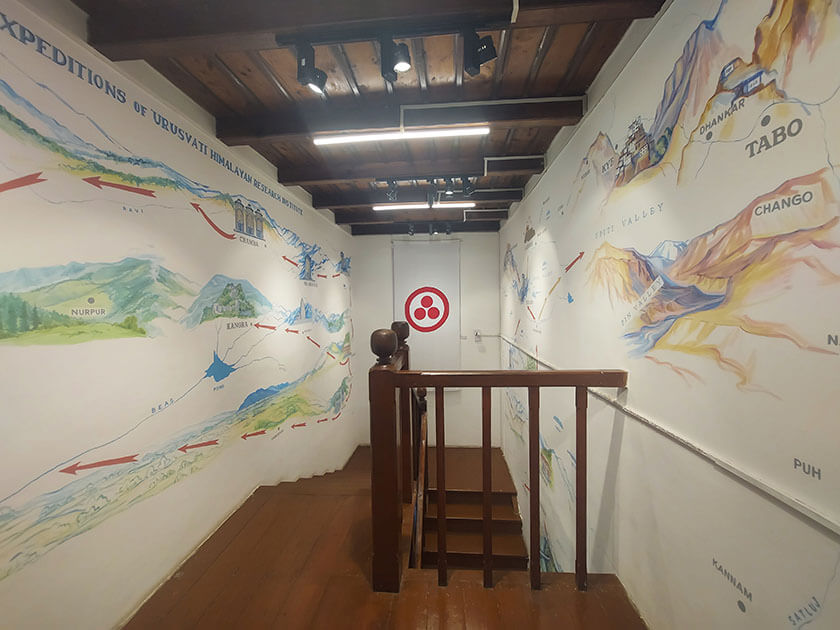 Is It Worth Visiting?

I think it is, unlike Naggar Castle. I visit art galleries or museums for two reasons… to know just as much about the life of the person or personalities they’re dedicated to as what they actually did. I know it may sound a little absurd, or confusing rather, but that’s me.

During my visit to Nicholas Roerich Art Gallery, in Naggar, I got enough vibe to find myself surrounded by the life of Roerich. His original art was hanging in his once-private house. The recreation of his house, including his master-room and others, was quite descriptive too.

I personally loved how the entire place also created a fine balance between Roerich’s professional achievements and his personal life. 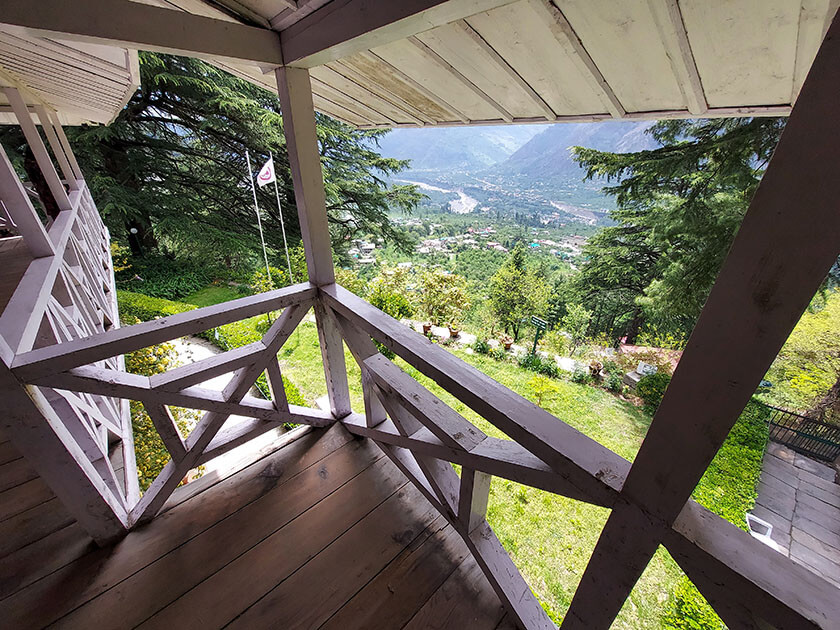 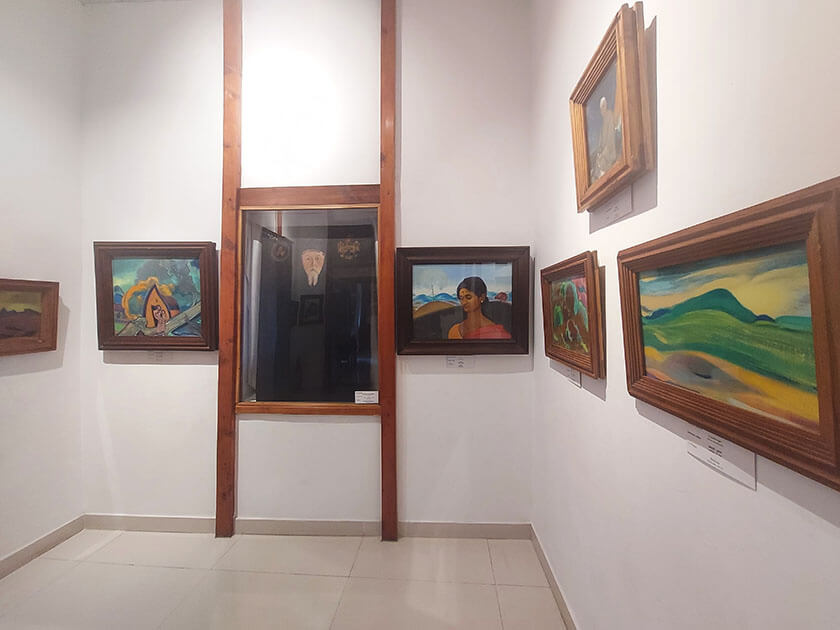 Where To Eat At Nicholas Roerich Art Gallery

Named as Naggar’s Special Tea for some reason that I couldn’t understand why (though tea is good there and so is Siddu) the best thing about this place is an open-cafe feel.

Here you can order basics like Omelette, Lemon Tea, Siddu, and Paratha with a lot of homemade desi ghee.

The place can accommodate about 10 people, but nevertheless with a view. Here are some Instagram-perfect photos from the Poonam Aunty’s… 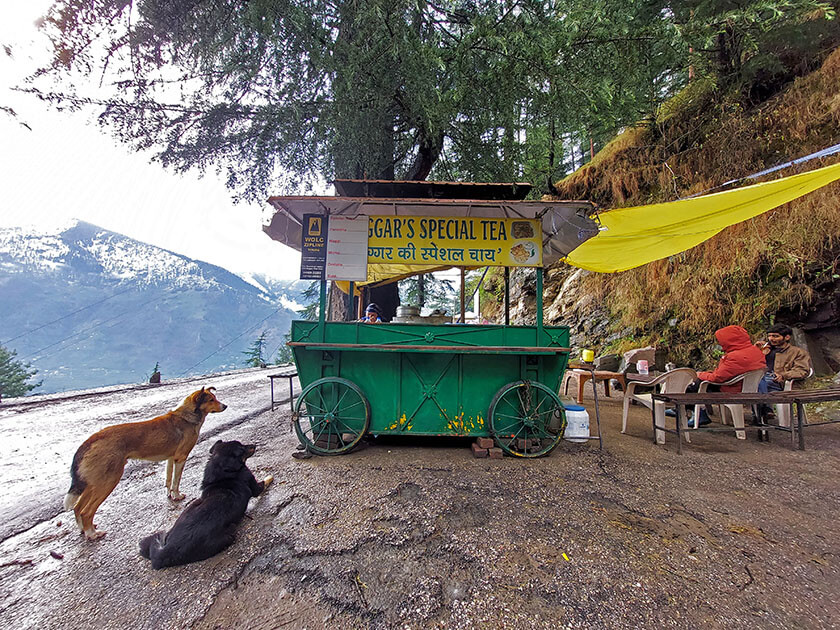 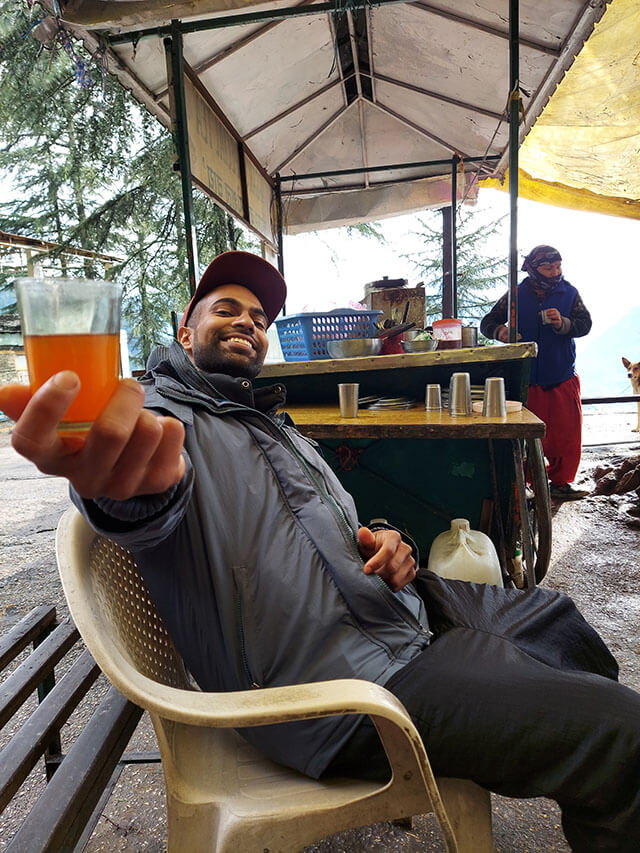 There are a few other fancy shops too offering better seating. Most eateries are located towards Naggar Castle.

I have personally stayed at this place for a month and so have a few other influencers.

They have two 2-bedroom + a kitchen setup. The kitchen is fully functioning with a gas cylinder and necessary crockery and tableware.

The two bedrooms have an adjoining gallery that gives sweeping views of the snow-clad mountains (between December & July mostly).

Inside the two bedrooms, you get a workspace with a few tables and ground matrices. The flooring is of wooden or carpet with one bedroom access to the bathroom.

The best part about this place is that it’s a homestay. The family stays inside the premises so if you are a bad cook, you can order food in-house at a very minimum cost. I ate meals for 50 Rupees here (depends on what you eat of course).

Anyway, each 2-bedroom+kitchen unit costs 30,000 Rupees a month, or 1800 Rupees per day. Usually, they rent it out for long stays but per-day booking is welcome too. You can find them on Instagram or find me and message. (Instagram link) 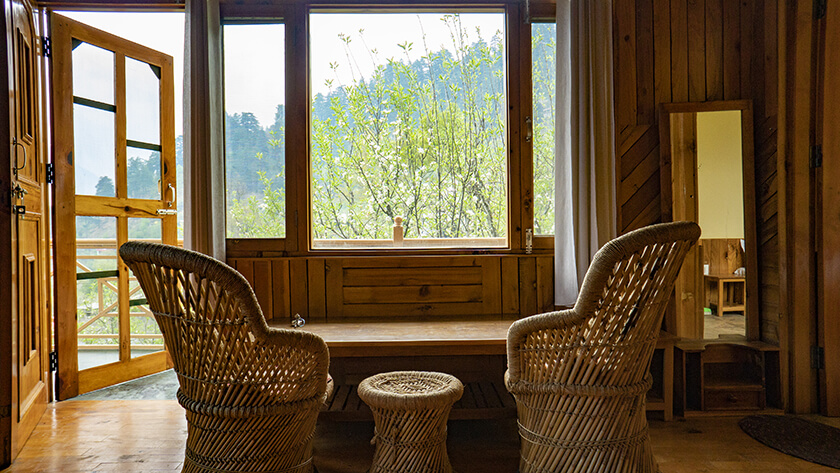 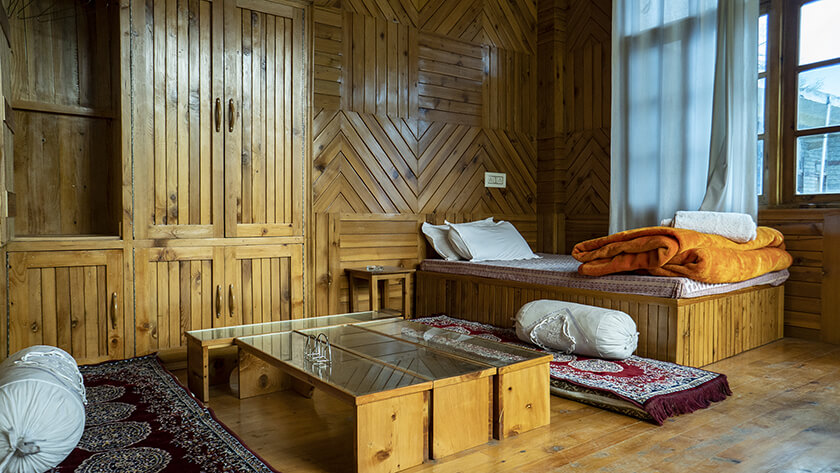 If your budget is a little low and you are a bucket backpacker hating the idea of a 50 Rupee entry fee for the Nicholas Roerich Art Gallery (like I did) then this place is for you.

Available for 300 Rupees a night, their dormitory is a bargain. You can use their in-house kitchen to cook or store eatables. You can find another hostel in Naggar (called GopStops) for about the same price, and I have stayed there too, but I personally prefer Cyrstal Art Cafe the more.

Find them on Booking.com

If you want to stay in a traditional wood + stone structure, this is the place for you.

It is a 3-floor traditional Himachali house restored from an abandoned Kathkuni house. Honestly, I won’t really call it a traditional Kahtkuni because it’s missing the slate roof, but it still has a pretty interesting architecture and is an authentic mudhouse.

The rooms are also very nice and cozy that offer a mix of modern comfort with a traditional feel. If I compare the rooms of The North with those of the Naggar Castle, the North easily wins. 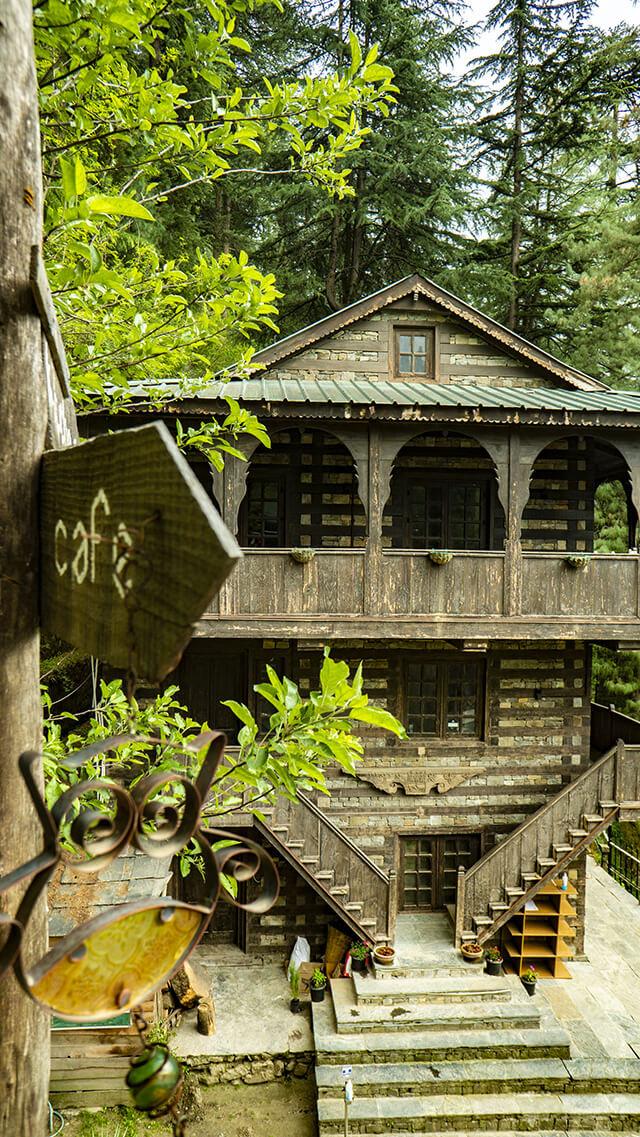 That’s all in this blog. If you want me to add something to it, please leave a comment below. For questions, please write to me on Instagram.