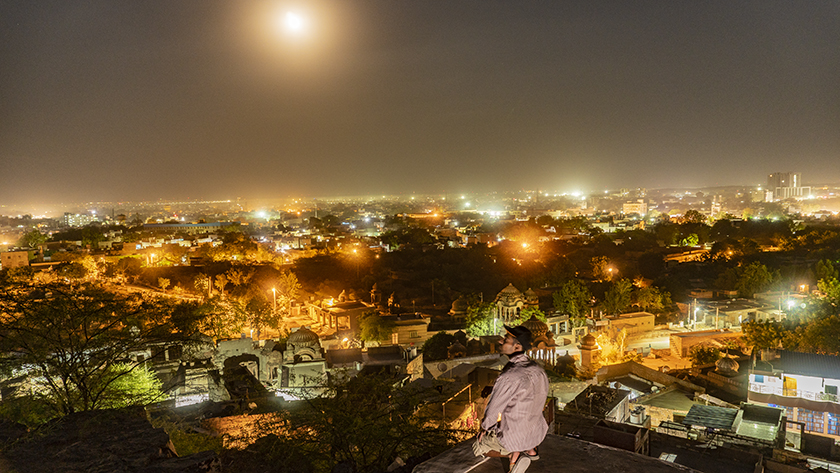 Before you read ahead, please note that everything that’s written below about ‘Jodhpur not being able to impress or intrigue me’ is solely personal. Now let’s get ahead…

As I alight at Jodhpur railway station, I was greeted by a confusing mob of a few hundred people — with some looking pretty familiar to the town, while others, seemingly hopeless and confusing as a  tourist, in a new city, would be. And I was no different either. As I exited the station, I got into the usual gamut of rejecting the constant soliciting of ‘Sir Auto’, ‘Sir Hotel’ requests until I walked a few steps away from anyone who could slyly put their touting Hat on me. Crowded, dusty and defiled, as Jodhpur appeared in the first glace, I realized, this isn’t the kind of Jodhpur I was hoping for.

Later in the evening, I found myself already escaping the town’s madness and looking for a quiet corner. From the popular sunset point of the Statue of Rao Rao Jodha (a 20-minute walk from my hotel) and with a thousand lights twinkling at a distance and a beer in my hand, I realized it wasn’t a bad spot at all to be concluding my first evening in Jodhpur.  A constant cool breeze on an early November evening was moreover adding to the experience. But at a distance all I could still hear and feel was people rushing across the town.

Surrounded by a canopy of dust and overwhelmed by uninterrupted honking, a voice inside me repeated again, “this sure wasn’t the Jodhpur I was hoping for!”

My First Impression of Jodhpur

I remember how when I came out of Jodhpur railway station I did something very unusual — hiring a taxi. I mean I am one of those people who, when arriving in a new place, find it amusing to be traveling in a local (rickety) bus, or Googling his directions to the hotel and walking for an hour with a massive rucksack on his back, then enjoying the luxury of a taxi. But in Jodhpur, I ended up doing exactly that. And it was because of a sudden disappointment.

I ended up in Jodhpur with a false impression, of dreaming for a town just as romantic as I found it on Instagram. What else I dreamed, or rather expected for, from Jodhpur, was a town that still resonated more history and culture than a confusing transformation of Old to New.

The 10-minute drive from the railway station to my hotel took me through a maze of interconnected and confusing by-lanes, very similar to any bustling north Indian imperial town of today (say Old Ahmedabad or Old Delhi) except for its periodically appearing fading blue buildings. The town was nothing more than a disappointing mix of crowded, bustling and dirty.

Also Read: Why I Loved Udaipur

The Usual Crowded Hold No Interest For Me Anymore

For someone not belonging from North India, or say not belonging from India at all, the confusing by-lanes of Jodhpur may still hold some interest (and I am sure it does). But for someone like me who grew up in the confusing and muddled neighborhood of Delhi, the old town of Jodhpur was nothing new. I mean if I wanted to explore chaotic wild streets and inhale some more dust choking my lungs, I would have done it in Old Delhi itself, why bother with a 12-hour train ride.

So yea, Jodhpur, just as brutally as my words here, killed the romanticism in me in no time. Its historic monuments were poorly looked after. The streets were only dirty and confusing. And everyone in the town was busy adapting to a new modern — slowly killing the Blue Jodhpur we’re familiar with.

The Blue Jodhpur Is Slowly Dying

There is no denying the fact that the Blue Jodhpur we always knew is slowly dying, with anyone finding a chance to remodel their property, remodeling it from a boring blue (as I think they find it) to fancy ivory or a striking yellow.

In the month of November of 2018, I found the old district of Jodhpur, getting a serious transformation, with one house in every twenty being literally demolished to build something fancier in its place. And that was another saddening factor.

So yea, if you’re visiting Jodhpur with a romantic image of being surrounded by contrasting blue buildings, please don’t. Though of course, you will still find enough of them to fill a frame you cannot fill an entire sight with it, as I rather imagined before actually ending up in Jodhpur.

The old fort of Mehrangarh is also nothing unusual, outside of its few Instagram perfect spots.

Most of the unnamed piece of old heritage, especially those lying outside of the city wall, was moreover totally overlooked by the authorities with no restoration work in the process whatsoever —  filled with more plastic and rubbish that you want to see.

So yea, again, the Jodhpur I found, in reality, wasn’t the Jodhpur that I had initially pictured. It could be so much better with all the architectural and cultural heritage it had, forget a few natural vistas (waterfalls and caves) and a few quiet places it is surrounded with. But with how the place is currently being managed, it’s sad to get there and not find the Jodhpur we had imagined in our head.

Have you been to Jodhpur? Did you like it? Or did you hate it? Please share your comments below. Also, do you have anything to share about this article on Jodhpur being so bluntly written? Let’s please be honest for a moment here!