Before I start with these Vienna pictures, I want to confess that Vienna wasn’t on my original travel itinerary.

After spending one day in Prague and exploring the offbeat Bohemian Saxon Switzerland Park in the Czech Republic, I thought of heading straight to Hungary and clicking some beautiful Budapest Pictures.

Vienna’s ‘old people city’ image was, in fact, demotivation. I mean why would a 20-something solo traveller want to visit a European town where all he can expect is an overdose of imperial grandeur of the Habsburg-era (don’t make an image already, wait for the Vienna pictures I am going to show you soon).

But as an invitation from Vienna Tourism landed in my inbox, recommending me a ballet performance and a guided tour in the world’s one of the historical and most reputable horse riding schools, I thought, “Why Not!”

Both the experience sounded unique, almost promising for — if nothing else — beautiful Vienna pictures. The next thing I remember, I was planning a whirlwind trip to Vienna and spending three days wandering around its many royal and imperial streets. It turned out that walking around the city was one of the best things to do in Vienna.

And now that I’ve concluded my visit to this royal city, I thought of putting up at least one photoblog on Vienna where I can tell some stories via what I have clicked.

So here we go…

My first impression of Vienna was of a combination of Old and New.

Now, for its modern shopping areas that appear to be sneaking into every neighbourhood of the city.

And old, because of its jaw-dropping architecture, springing up from everywhere; and the many horse carriages, adding up to its imperial charm. 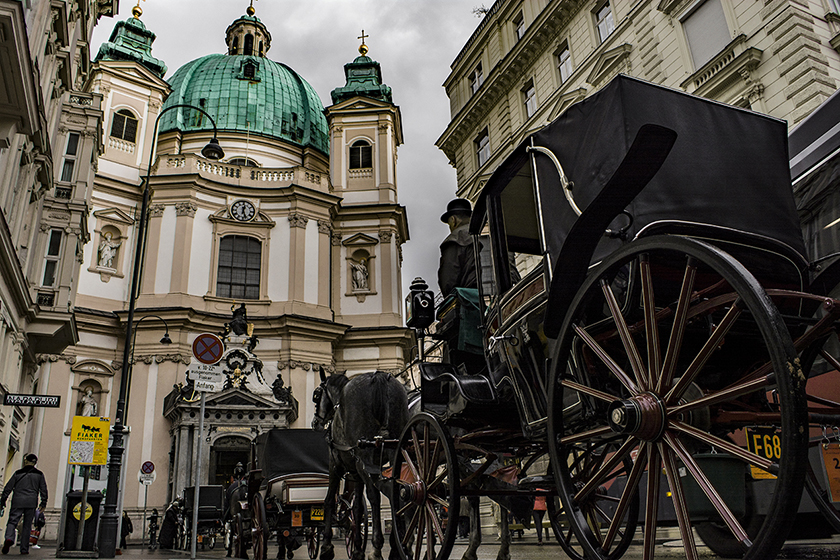 If you happen to be a professional photographer, rest assured that you’re going to get not just the best Vienna pictures here but some of the best Europe photos of all time too. 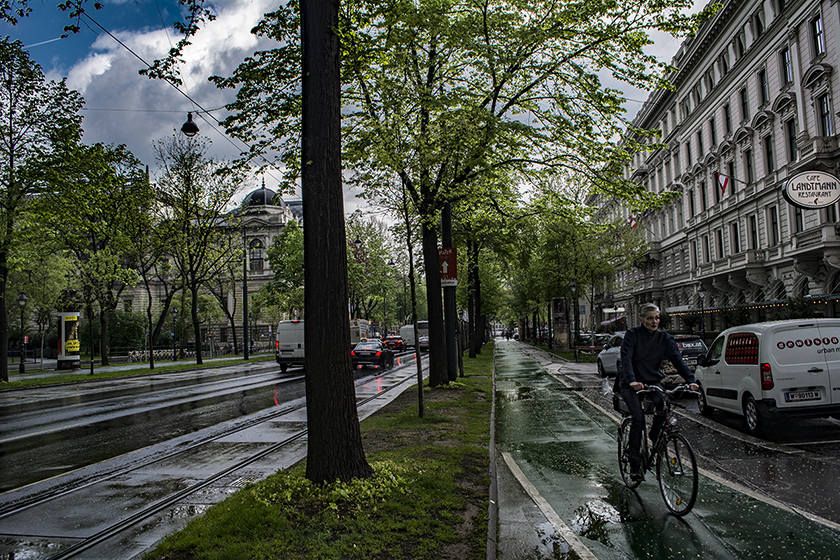 Contrary to what I originally imagined, I found that there is a new energy flowing through the city. Though it’s true that Vienna is still more alive in its old but renovated museums, it was definitely something more than an ‘old people’s city, as is often referred to.

It surprised me with its young and hip side and vibrant culture while keeping a perfect balance with its generations-old history. 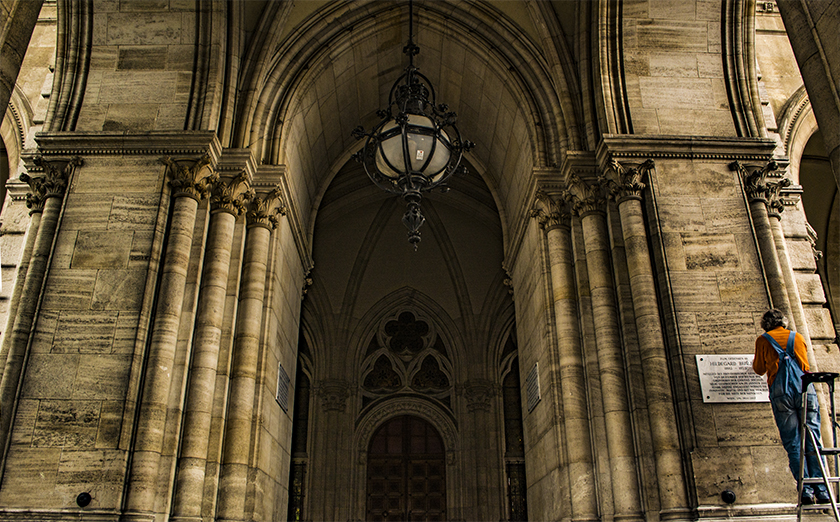 The city is, however, still dominated by its centuries-old architecture, which means that the restoration work never stops here.

Visit Vienna any time of the year, and you may find some of its architectural buildings closed for restoration, while others, get minor repairs during public hours. 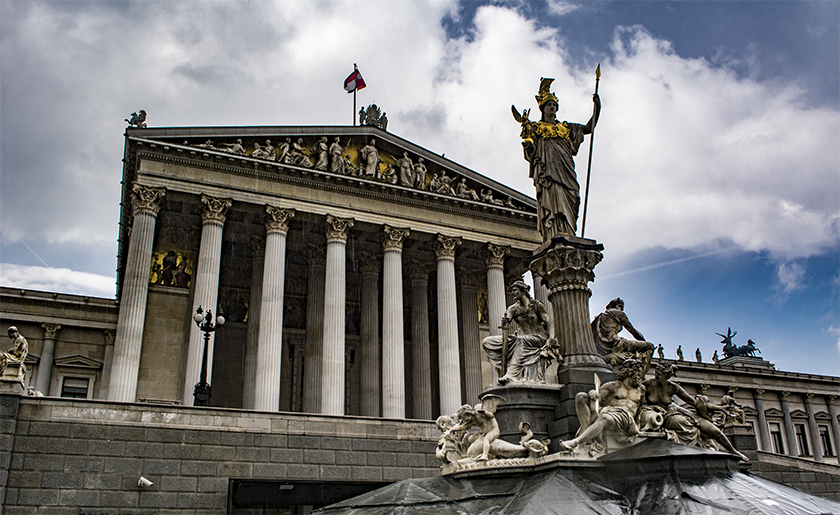 Out of all its architectural marvels, one impressive building is the Austrian parliament, which breathes history and stories, art and noble architecture. It is interesting to note that the construction work for the parliament began in 1874 and took a dece before it was completed in full in 1884.

Capturing the parliament from different angles certainly gave me some of my best Vienna pictures. Check the next one, for example. 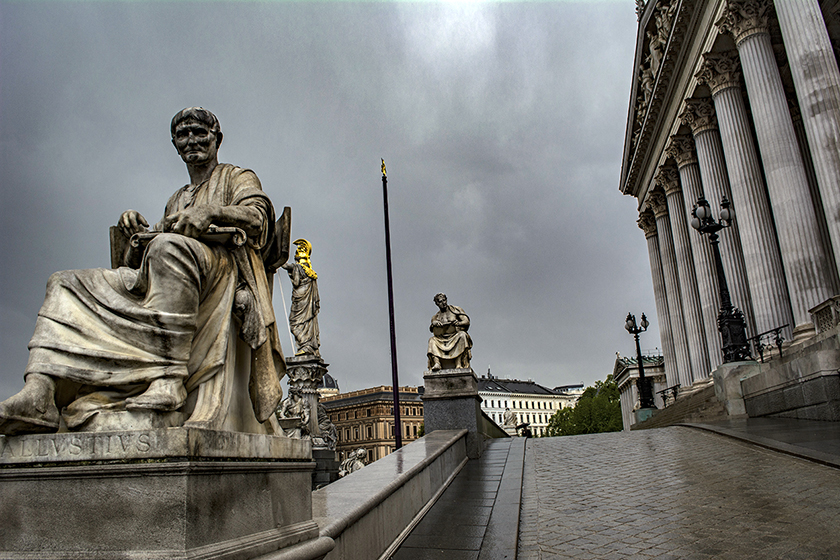 Another interesting thing about the Austrian Parliament is its Greek-styled architecture, given by its Danish-origin architect Theophil von Hansen to reflect the idea of law and freedom and other relevant concepts popularized and/or developed by the Hellenic culture. 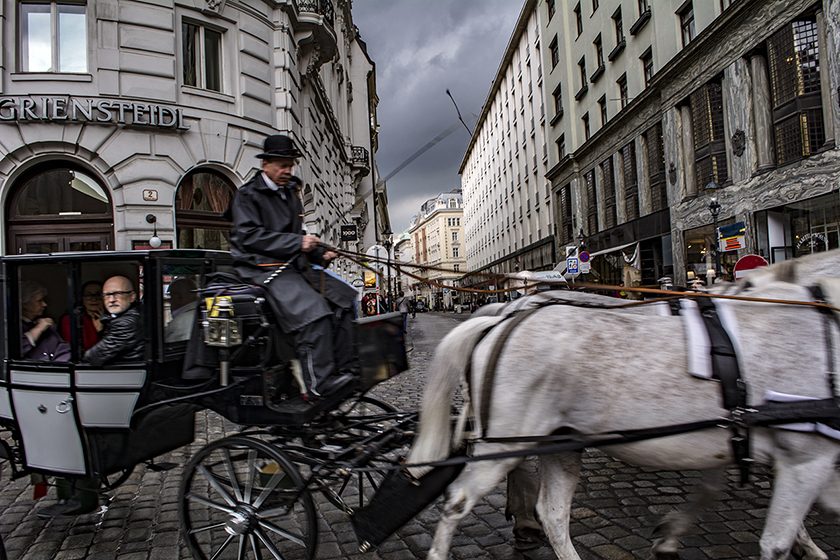 Horse-driven carriages are, just as much a part of Vienna as the many historic building and tourist attractions like St. Stephen’s Cathedral or the Giant Ferris Wheel. For a tourist, a ride with a two-horse carriage can be one of the highlights.

And well, there seems to be no royal way to explore this tiny beautiful city, than from inside a horse carriage.

Take a ride in one of them and you will certainly get some of the most impressive Instagram-perfect Vienna photos. 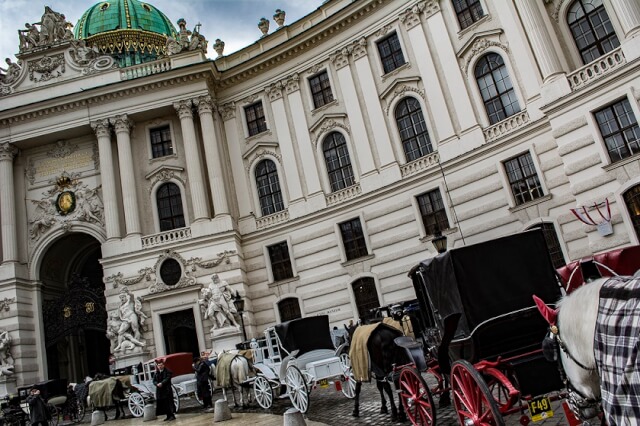 I, however, only clicked with other people and the carriages from the outside.

And to see them in all sizes and shapes and to click the carriage of your choice, go to Michaelerplatz — situated right opposite the Spanish School of Riding. 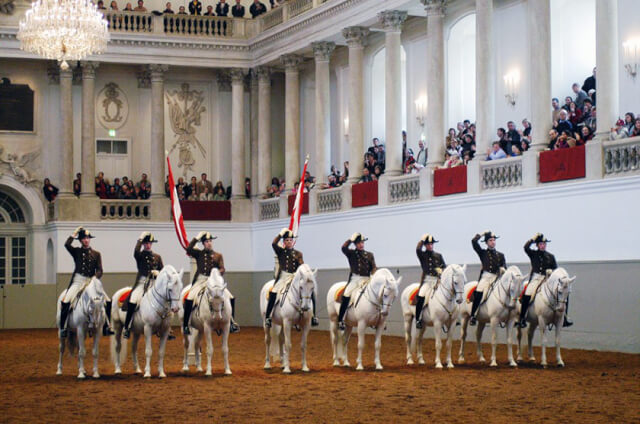 The Spanish School of Riding, in Vienna, is the only institution in the world where the classic equestrian skills (Haute école) have been preserved and are still practised in their original form.

The school has been training horses and riders since it was established by the Habsburgs, back in the 1500s. For the public, the school offers a 2-hour morning exercise session, and a guided tour right after that.

The Spanish school, other than the Opera House is the only few places where you are not allowed to click pictures in Vienna unless you have special permission.

Another thing is that both the places have a very expensive ticket (but with a trick). For example, the price for a seat in The State Opera House in Vienna is over EUR 150, but if don’t mind standing during the performance you can buy a standing ticket that costs less than EUR 5. Check this Vienna budget guide for more such tips, or check my standard Europe Budget Travel Tips. 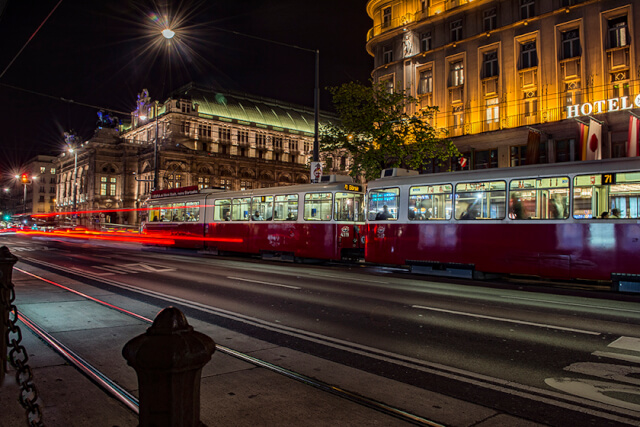 The tramway network in Vienna (Straßenbahn) is one of the longest in the world. It has more than 30 lines and some of them have underground stretches. But among all, lines 1 and 2 are the most useful for tourists, because they take you around Ringstrasse, and make some stops by emblematic buildings like the Opera, Hofburg Palace, the Parliament or the Stock Exchange building. 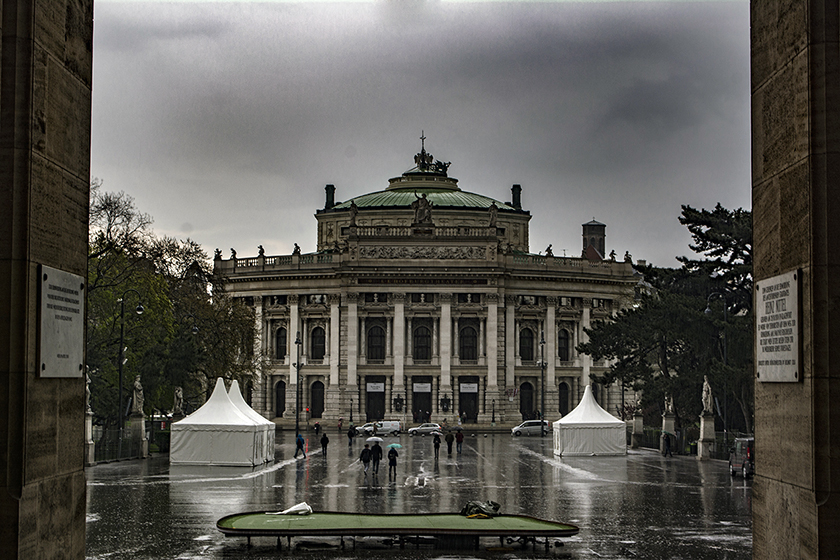 As seen from Rathausplatz, right across the street (on Ringstrasse) is the popular Austrian National Theatre called Burgtheater, which is regarded as one of the most important German-language theatres in the world. 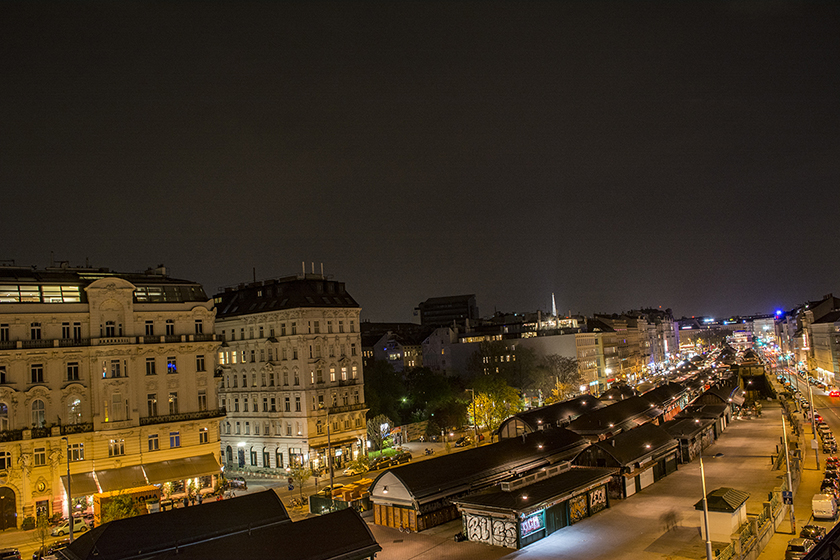 This is the popular street food market of Naschmarkt, as seen from my hostel lobby. The entire half a kilometer stretch of food stalls (the small black huts as seen in the middle of the road), is a culinary experience featuring many different regional cuisines, selling Kebabs to Indian spices to various cuts of fresh meat.

If you’re a budget backpacker like me, it’s a nice place to get ingredients for whatever you come up with, within your hostel kitchen.

And if not, just go here to get some of the best pictures of Vienna streets. 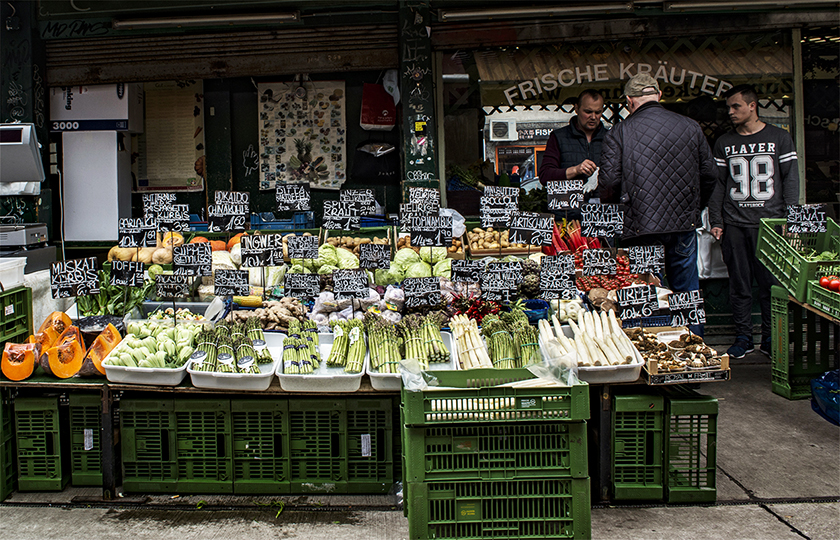 A typical fruit and vegetable stand in Naschmarkt.

And a hot dog or a burger stand, for a quick meal… 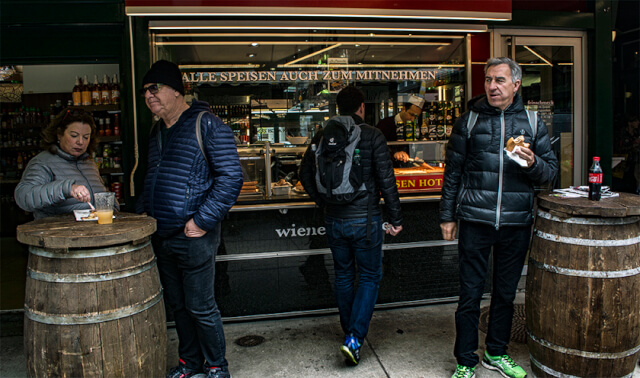 Street food is on the tip of everybody’s tongue today, as so is the case with the Viennese. Thanks to the many sausage stands, known as Würstelstand, dining on the fly is so easier and more accessible in Vienna. These sausage stands which are now part of the cityscape, have moreover been always a Viennese culinary trademark. 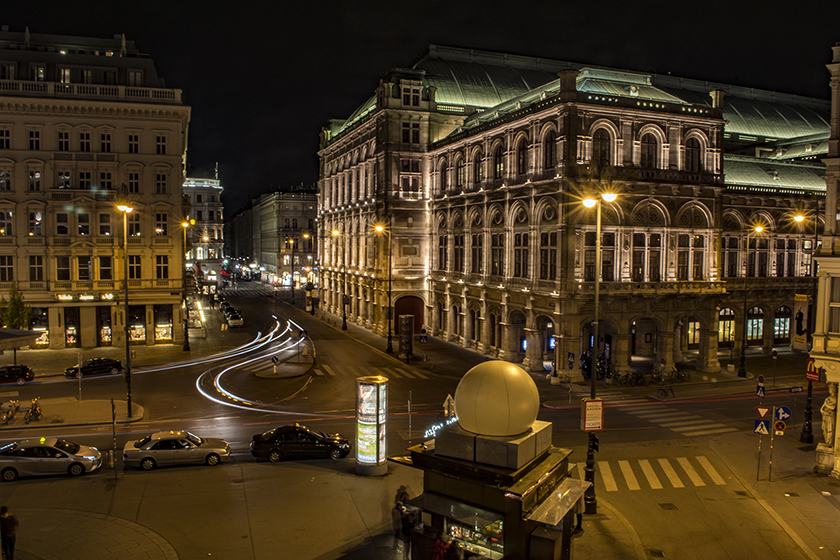 Vienna is also, almost always, buzzing in the nightlife, which can be found in an array of eclectic spots around the city, from decommissioned subways, boats on the Danube, or from somewhere high above that offers a million-dollar view.

That’s all in this blog on Vienna pictures. If you happen to travel from India to Europe, check my how-to plan a Europe trip from India guide.