This one day in Prague travel guide will help you explore some of the top highlights in the city in just 24 hours.

Prague is one of those destinations that always seems to be in vogue. It has been on the tourist map for a long time, and the crowds show no signs of abating — particularly when it comes to women. And I understand the fascination. It is gorgeous, has a Vegas-style nightlife, and it speaks of, from its all nooks and corners, nothing but a hint of romance. See these Europe pictures to compare the romantic Prague streets with other cities in Europe.

For those who plan a Europe tour from India, the city remains a popular fascination, in addition to popular highlights like Mount Titlis in Switzerland (for the Swiss Alps and the love for SRK movies).

Other than being beautiful, vibrant and romantic, Prague is rich in history too. There is just so much to see and absorb here that if you’re staying there for only a few days, you’re going to miss a lot. 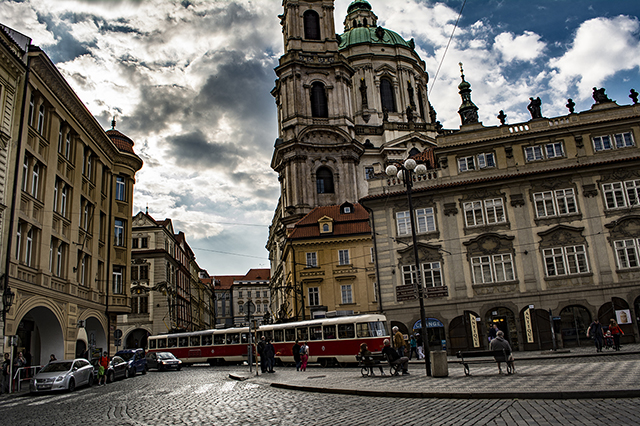 But I understand not everyone has too much holiday time. And if you too are just as unlucky as I was and have only 24 hours to explore, this one-day in Prague guide will help you see the top highlights in the town.

Using this travel blog, you can uncheck most of the popular tourist highlights you have only read about in the guidebooks. So let’s get started…

One Day In Prague Travel Blog

Since I stayed there for 3 days, out of which, I spent a day in the Bohemian and Saxon Switzerland Park, I was already short of time. So very carefully, I opted for a full-day guided tour around the city for I did not want to leave the city unsatisfied and complain to myself “wish I had seen more tourist destinations in Prague some more time.”

I used a tour company called Prague Bus Tours, for their full-day (a little more than 7 hours) guided tour, to make sure I get to see all tourist highlights in one day in Prague.

We explored tourist destinations like Castle and Charles Bridge, before finally stopping for some traditional food for lunch, and then continuing further with the old town square and a wee boat ride across the river Vltava. 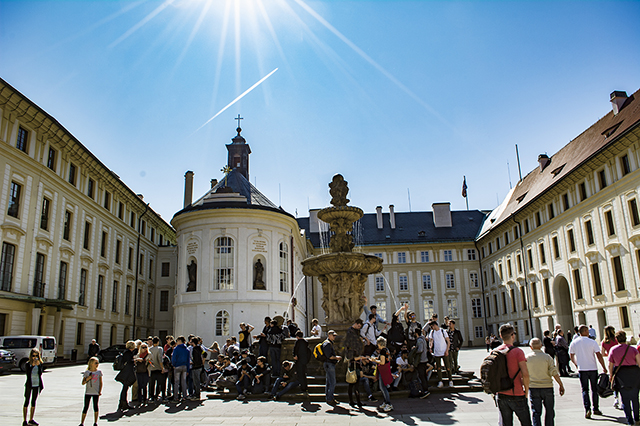 Prague Castle and Charles Bridge (and the Old Town Square, of course) are the highlights of any tour. And that’s exactly where you should be starting your 24 hours or one-day Prague tour if you are doing it on your own.

After quickly picking me up from my hostel, we (me and 7 other German guests who were also a part of the tour) drove through the scenic ride up above the most popular tourist destination of Prague Castle, from where we started our first half of the day.

And first on the list was a walk inside Prague Castle.

Getting inside the Prague castle, unless you have a skip-the-line ticket, can be time-consuming because of the long queues to get an entry ticket. And that’s exactly when paid guided tours feel quite blissful, on top of the fact that you are picked from your hotel and taken straight to the castle.

So yea, if you have only one day in Prague, a guided tour is the best way to go about it.

We entered via the back-side, for we already had our tickets sorted. Though the queue still took 10 to 15 to clear, it was at least not as annoying, as other queues (from the main entry) seemed. We went lucky to make it in time and catch a glimpse of the Changing the Guard ceremony.

After a quick stroll inside the castle, and a bit of information-feed and fun facts about tourist places in Prague by our guide, we headed to the ever-impressive 10 centuries-old St. Vitus Cathedral. 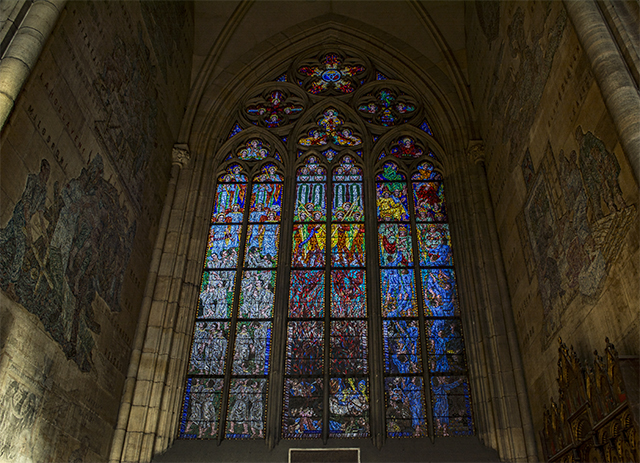 It was sad to know that such impressive architectural marvel faced the hardship of communal fights and an uncontrollable fire in the 16th century, during which most of the buildings got damaged.

It was only after the 20th century that the Cathedral was completely restored and given the shape, which we are much familiar with, today.

Visiting the St. Vitus Cathedral remains one of the most important stopovers of every Prague tour itinerary.

It was just as beautiful a Cathedral as the Cathedrals I saw during my Vatican city tour. 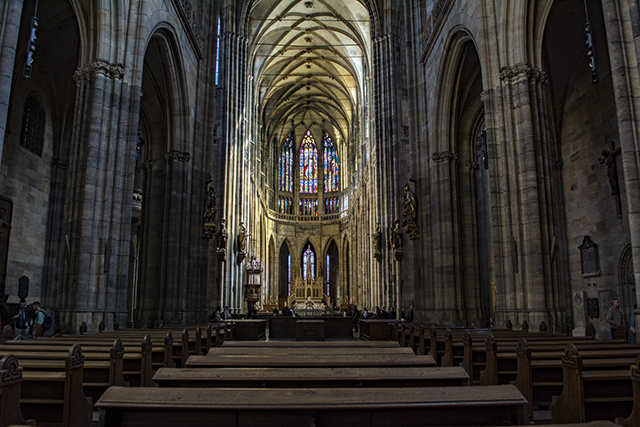 Walking through the conduit of ever-impressive cobbled streets, next, we reached the popular Charles Bridge.

Along the way, we learned from our guide that the Charles Bridge played a critical and strategic role in linking the castle to the rest of the town and until 1841 the Charles Bridge was the only link between the two halves of the city.

The bridge was originally named “Stone Bridge” or “Prague bridge” but was renamed later as the Charles Bridge (after Charles the fourth) in the 19th century as a tribute to the leader who transformed the city into imperial glory and greatness.

It doesn’t matter whether you have only one day in Pague or less than that, visiting the Charles Bridge is a must. 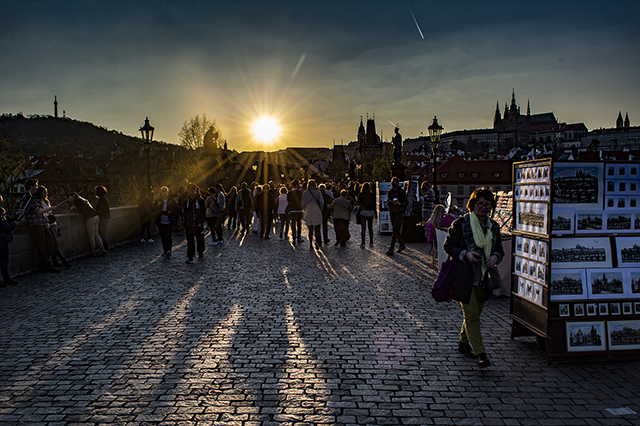 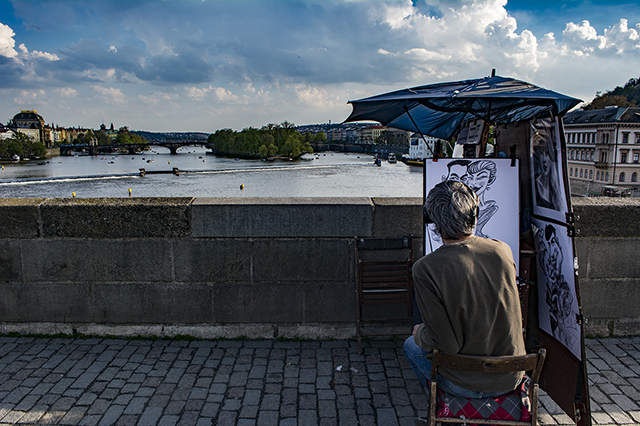 Every day thousands of tourists pass through this remarkable tourist attraction in Prague, with some of them taking usual selfies, while others, opt for a more detailed self-portrait. 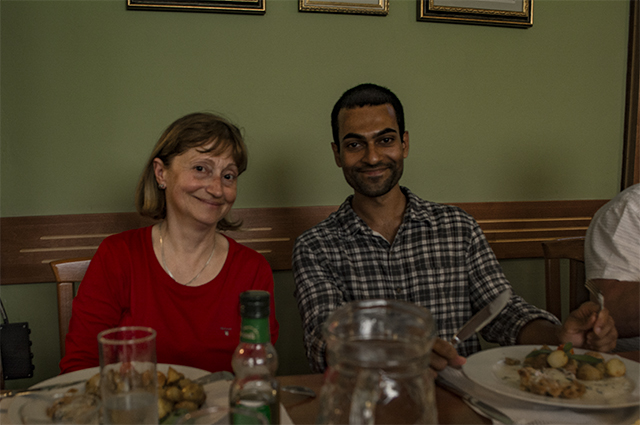 As many tourist destinations in Prague are about history, a vibrant lifestyle, and fashion; food and beer are also equally important parts. And to experience a bit of it and savour our taste buds well, we ended up in a traditional Czech restaurant right opposite the old town square.

Though the main course and a drink were included in our one-day Prague tour package, and we could have anything we wanted, I still left the decision to my guide, for, of course, she knew better about what a tourist must eat when he had no idea about the real Czech food.

Yet not opting for something too traditional knowingly Czech food can be heavy, I decided to go for roasted chicken with potatoes and sauce, and it tasted just as delicious as it looks in the picture. 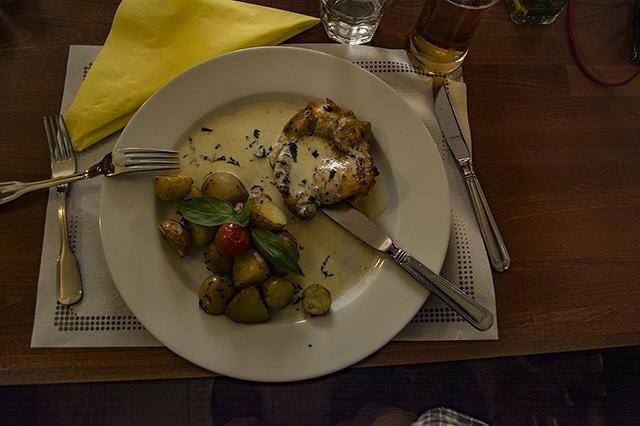 After Lunch: More History And A Cruise-ride

After having our bellies filled and satisfied, we get to the Old Town Square — the city’s main marketplace since the 11th century and another must-not-miss tourist attraction in Prague.

The square, one of Europe’s most beautiful, is surrounded by exquisite historical buildings, the most eye-catching of which are Old Town City Hall, Týn Cathedral, Astronomical Clock and St. Nicholas Church.

But among all the attractions at Old Town Square, the one that attracts the most tourists and ends up in several thousand selfies every day, is the Astronomical Clock. Again, no matter whether you have one day in Prague or 6 hours, watching this is a must-visit tourist attraction.

It is at the Astronomical Clock that every hour hundreds of tourists gather, with a camera in their hand, heads peering up the tower, as they wait excitedly to see the clock make the sound every hour. 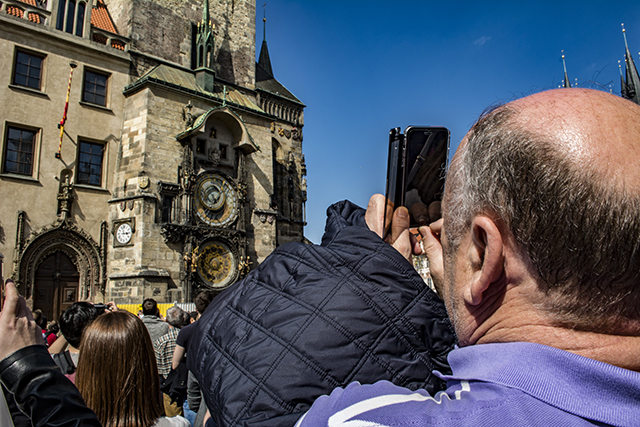 The clock chimes and the four figures flanking the clock set into motion. A window above the clock opens and the mechanical Walk of the Apostles begins. As a nice touch, after the clock’s performance, a trumpet player heralds at the beginning of the next hour.

It is said that the cock in the middle, with a smaller circle, symbolizes the short human life. So yea, other than being a popular tourist destination in Prague, it has history too. 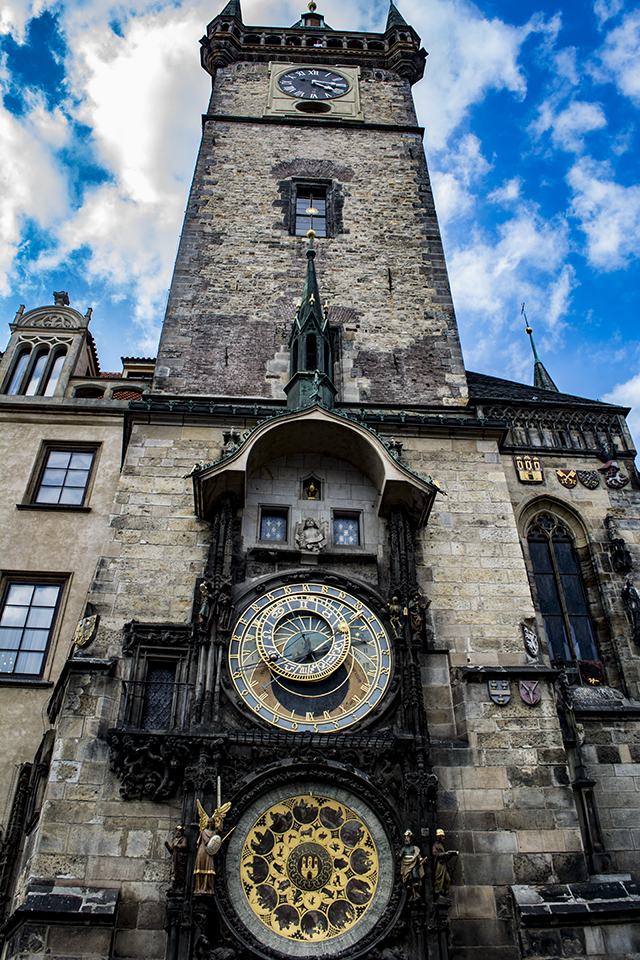 A few meters away from the old square lies The Paris Street — the most expensive and popular shopping street in Prague (with some 8000 Euros per-square-feet market value, if I heard it right). Paris Street is renowned for its numerous high-end luxurious shops for apparel, watches, and jewellery. A quick look at the parked cars that range between Audi and BMW (with a rare Lamborghini shining almost blissfully) moreover gives you an idea that you’re walking on a street rather unusual.

Bypassing Paris Street, and on the other side of it, was Náplavka Na Františku — the starting point of the Prague Boat Ride. If you want to cruise along the beautiful Vltava river, with more translation in English, while seeing all the beautiful tourist places in Prague in one go, this is a must-have experience. It reminded me of the boat tour I had during my Bingen and Rüdesheim trip.

The cruise lasted almost an hour and showed us almost all the things we covered during the day on foot — a perfect ending to and ever perfect day. 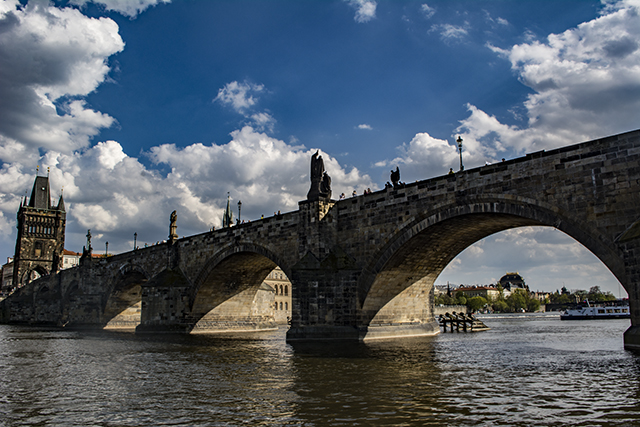 A bit about the factual mumbo-jumbo

Would you like to add anything to this one-day Prague travel blog? Please share in the comments below.