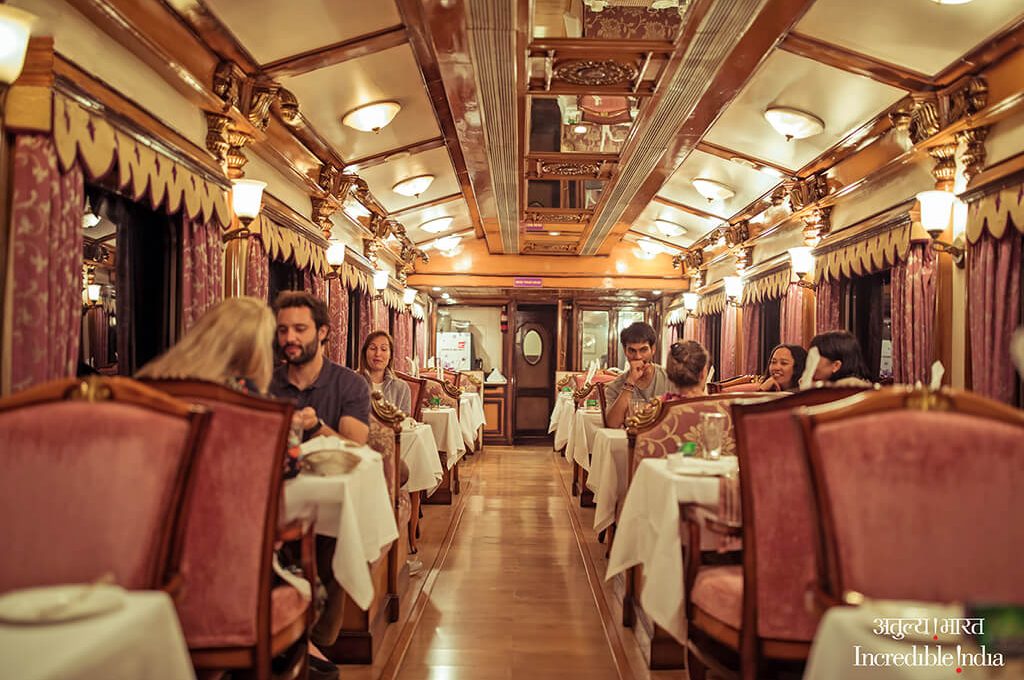 Planning a trip with Golden Chariot luxury train in India? Is it worth it? Read the itinerary, check out the price, see some photos & decide yourself.

For a country like India that is so diverse and distinct, train-travel remains a beautiful highlight. Hopping from one place to the other while noticing small differences in the culture, traditions, and landscapes is a delight of a different kind. And when you get to do it under the luxury of having your own private room, world-class food, a gym, a spa, and a lot of royal treatment, things become even more interesting.

Yes, I am talking about one of the five Maharaja Trains that run across India: The Golden Chariot.

I happened to travel on Golden Chariot luxury train during a blog trip with the Ministry of Tourism in India. As a team of 15 bloggers, representing 6 continents, we travelled from Karnataka to Goa. We visiting some of the highlighted gems in the region.

Despite repeating most of the places (as I had visited them in the previous years) the entire experience felt no less refreshing — after all, The Golden Chariot promises a rich cultural experience, coupled with absolute comfort, style, and decadence.

It does not only promise luxury but ‘royal luxury’!

The Golden Chariot — an absolute luxury train travel in India! 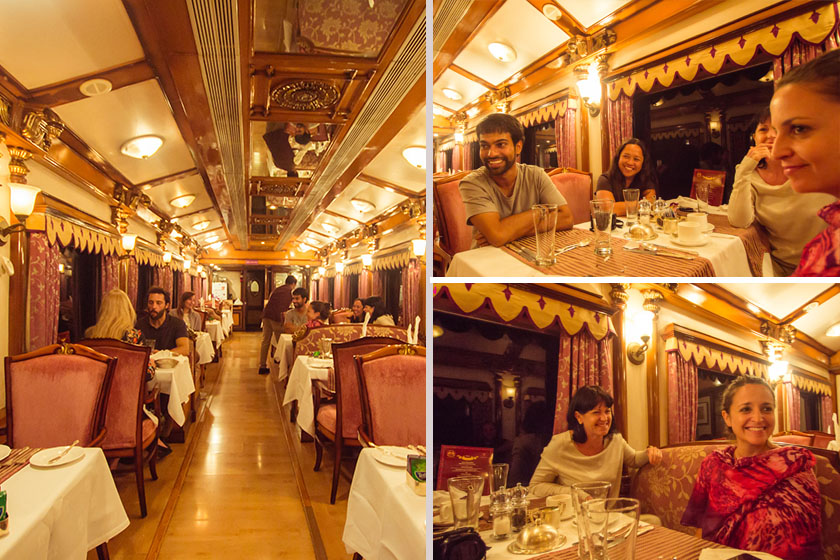 The Golden Chariot: An Introduction

Before the start of our journey, I was quite unsure about what to expect from it.

Being a frequent train-traveller in India, the entire idea of luxury train-travel felt a bit strange. But it turned out that travelling in The Golden Chariot was not just about experiencing luxury or exploring a few highlighted places, but experiencing a way of life — all with a touch of royalty.

Before we started our journey, from Bangalore, and boarded the train for the first time, we were welcomed with a brief red carpet walk, some live Indian classical music, flower garlands, and refreshments, just like Maharajas would do in the past.

Also Read: Why Luxury Train Travel Is The Best Way To Travel India 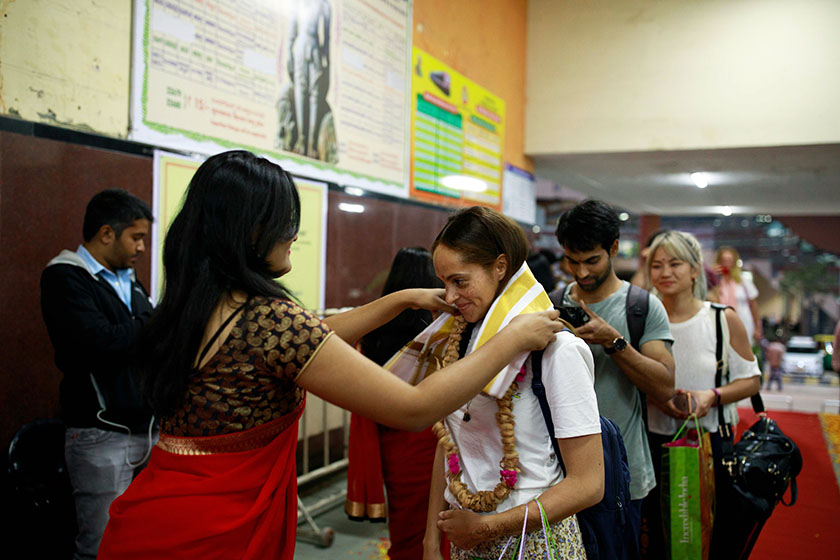 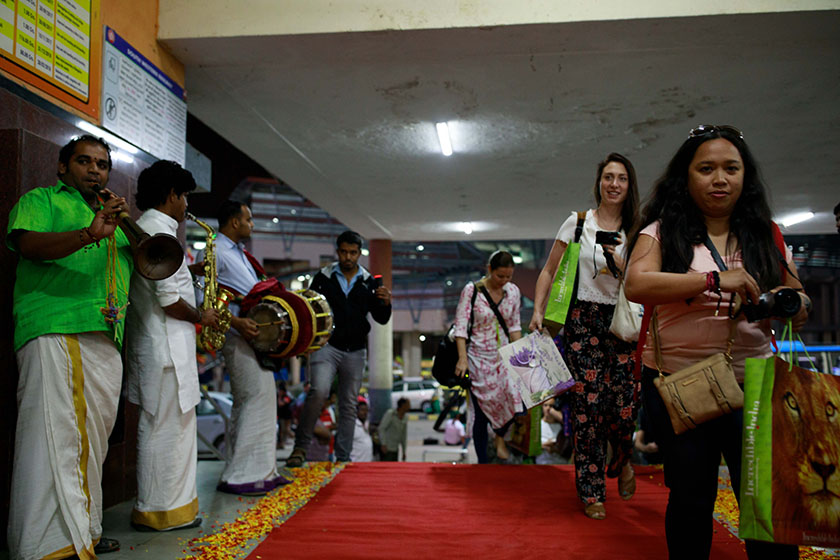 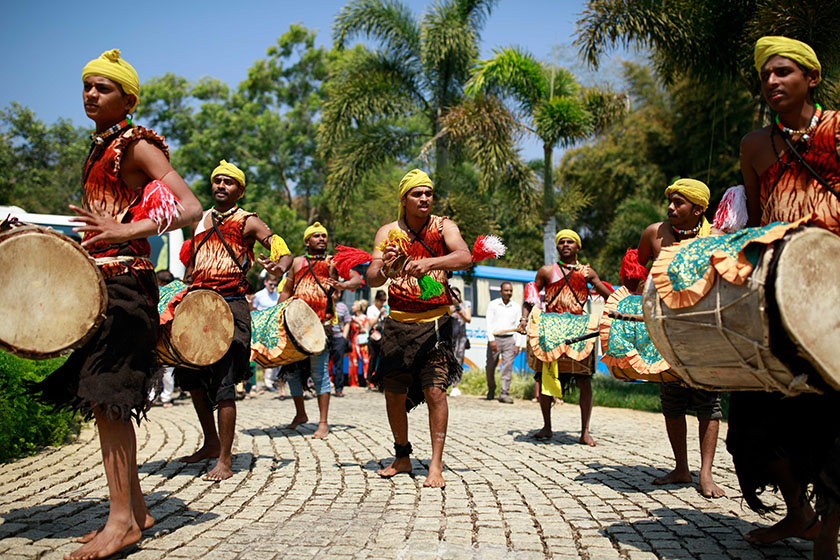 Later, the representatives of The Golden Chariot greeted in a traditional South Indian way and quickly debriefed us with what to expect in the days to come. From the decor of the suites to the cuisines served at the dining cars to the places we travelled to, all spoke of nothing but a hint of rich South Indian lifestyle.

There are two different Golden Chariot itineraries. Both routes are followed by alternatievely…

The Pride of South

The Pride of South that starts from Bangalore and concludes in Goa, covers destinations including Mysore, Bandipur, Chikmagalur, Hampi, Badami and Goa.

I happened to cover The Pride of South. 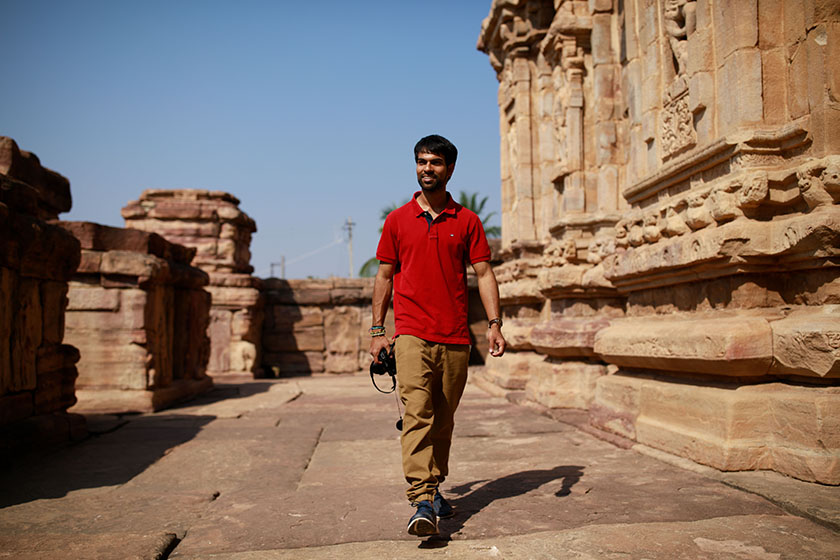 Our journey took us to many UNESCO and other archaeological sites in India.

To name a few, we visited the Mysore Palace, Tipu Sultan’s Summer Palace, the 12th-century Hoysaleswara temple in Hassan, the highlighted ruins in Hampi, Badami Caves, and the 8th-century temple complex in Pattadakal.

Other than exploring temples and the rich Indian history, the journey took us to a coffee plantation in Chikmagalur and India’s largest tiger reserve of Bandipur National Park for a morning and an evening safari. 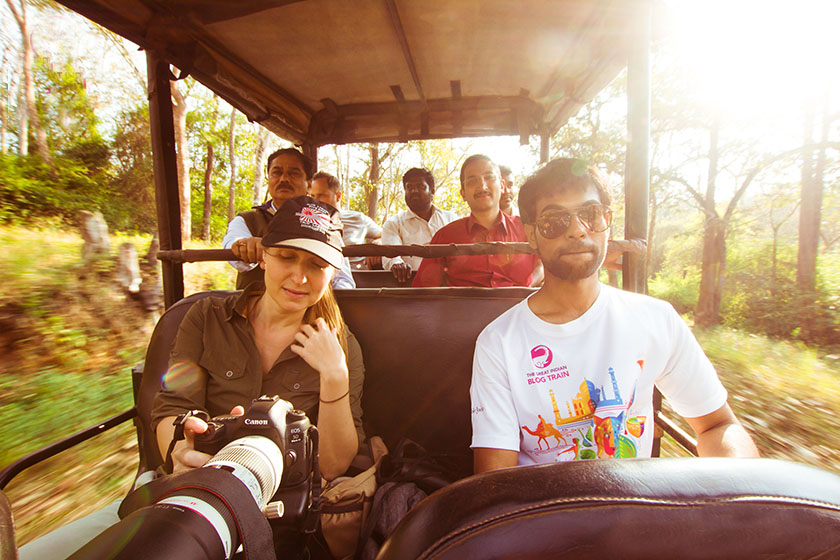 The tour concluded while relaxing on a private beach in Goa and toasting with new friends with some style and decadence. 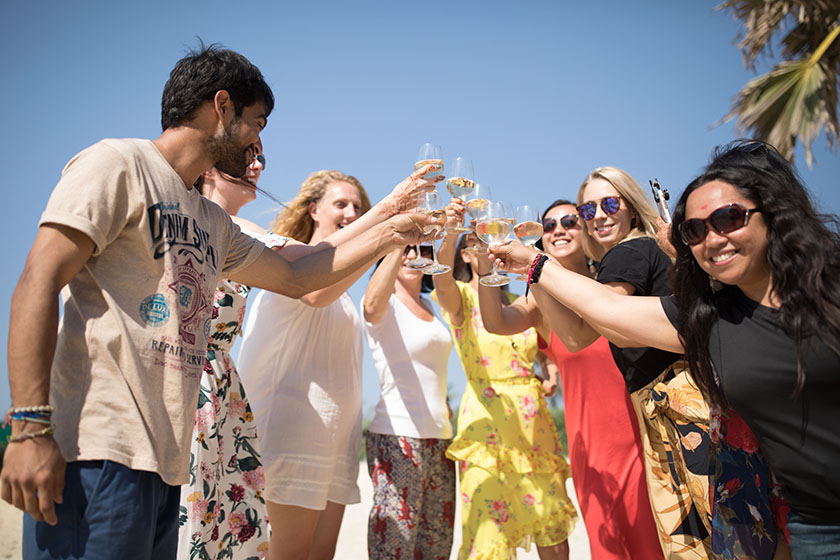 Now if you’re thinking how we managed to visit all the places since some destinations didn’t have a railway line connecting them, let me tell you that we did it in a luxury bus, which was just as much a part of the journey as travelling in the train. At every destination, we would meet a tour guide and travel with him on the bus that would take us through the details of various sight-seeing places and help understand the place better. We would explore the place in the day and return to The Golden Chariot in the night and continue the journey to our next destination.

For example, during our trip to Hampi, we disembarked at Hospet and departed for Hampi in the coach. We explored the local Hampi Bazaar, the popular Virupaksha Temple and a few other places before moving to a resort in Hampi for lunch, followed by the highlight of the trip — the Vittala Temple (and the Stone Chariot, that train The Golden Chariot was named after). 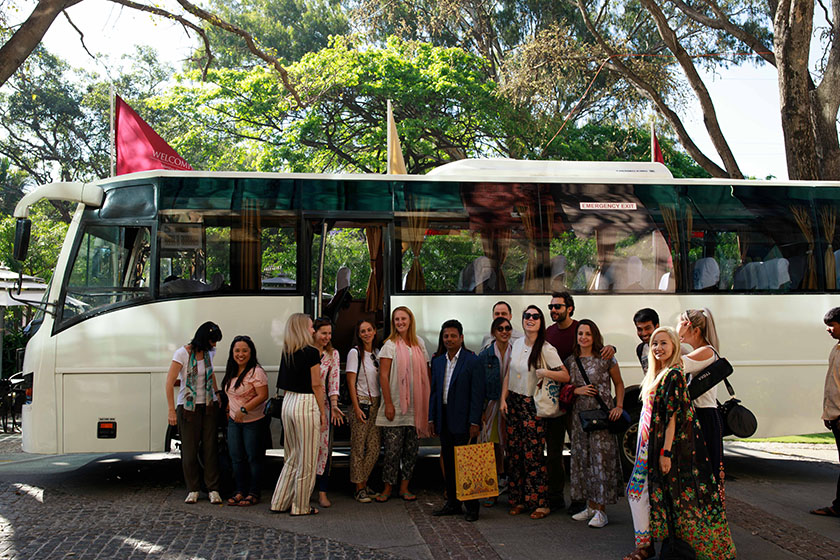 When done, we returned to the train and started our journey towards Goa.

Awarded as ‘Asia’s Leading Luxury Train’ in the year 2013, The Golden Chariot is a magnificent treat in terms of hospitality and service. All its cabins are inspired by the ancient Hoysala temple architecture and are vibrantly coloured in golden and purple — exhibiting the fine architecture of the South and the astounding craftsmanship of the golden days of South Indian kingdom. From the ceiling to the floor, and everything else in between appeared like a mini replica of a south Indian palace. 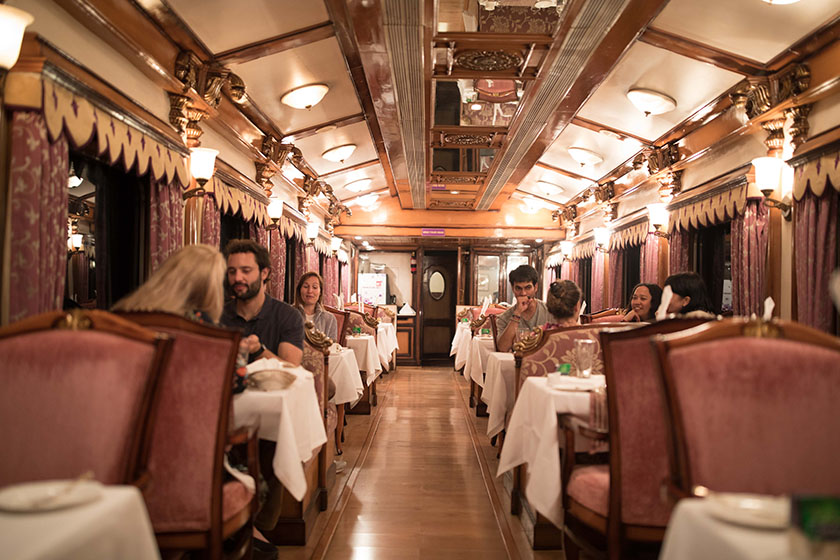 The coaches were moreover named after different South Indian dynasties like Chalukya, Ganga, Vijayanagara etc. My coach, for example, was named after a royal family ‘Kadamba’ that ruled the parts of northern Karnataka — with the interiors of the coach resembling the architectural style of that era. The whole idea of living under that name while being treated as someone no less royal was indeed charming. 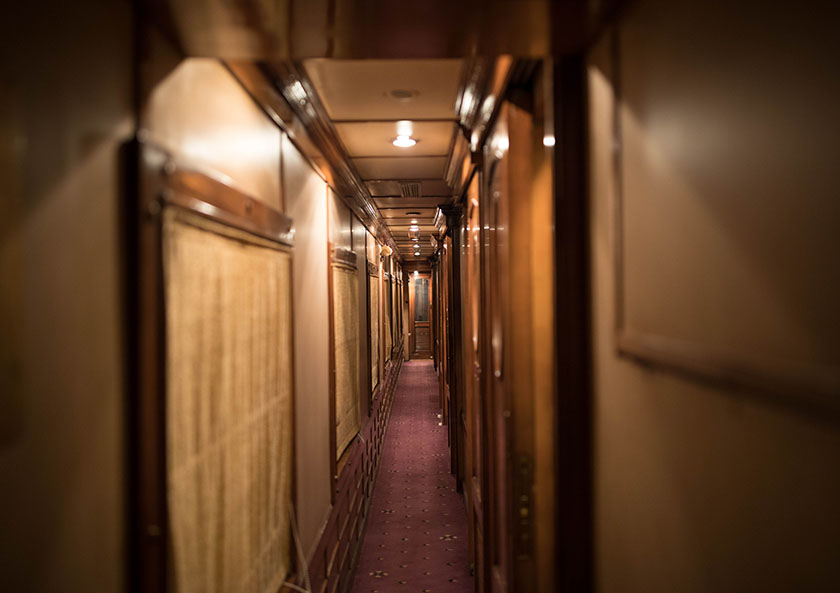 Speaking of the facilities onboard, The Golden Chariot, in addition to a contemporary and classic lifestyle locale, was being equipped with Wi-Fi, channel music, television set, and private writing desks, so staying connected was never a question. For health aficionados and workaholics, the train came with a gym and a spa, and a mini business center. 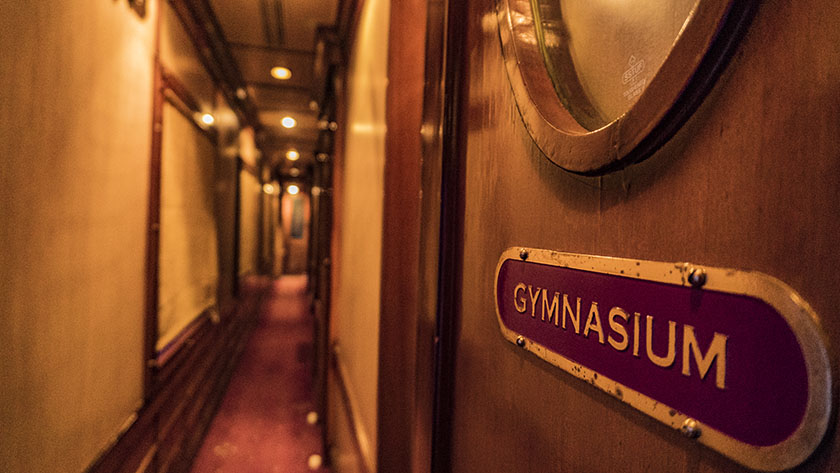 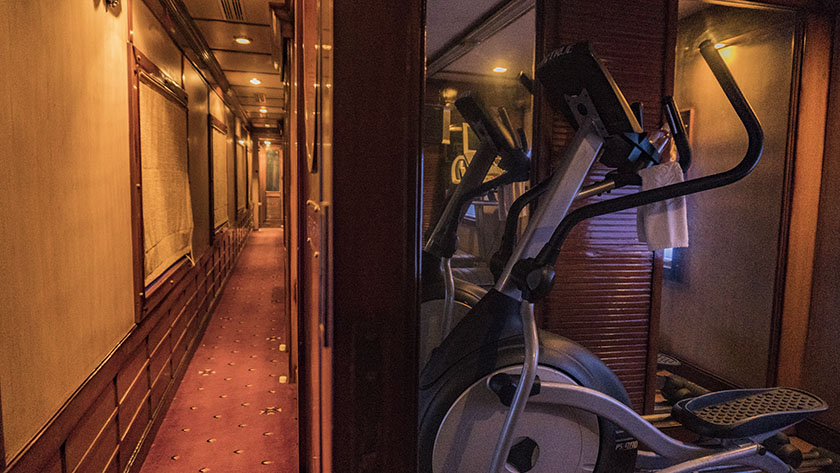 The train moreover had two fully dedicated restaurant coaches, that, by definition, had a pretty standard menu (of Indian and continental cuisine) but the guests always had the freedom to demand something fancier. If the crew knew how to cook it, they were going to do it for them.

The hospitality of the staff remained the biggest highlight for me. They would do everything for the guests — from bringing them the morning tea in the room (if asked for) to taking care of the laundry to keeping them appraised of each day’s schedule — and make them feel special. 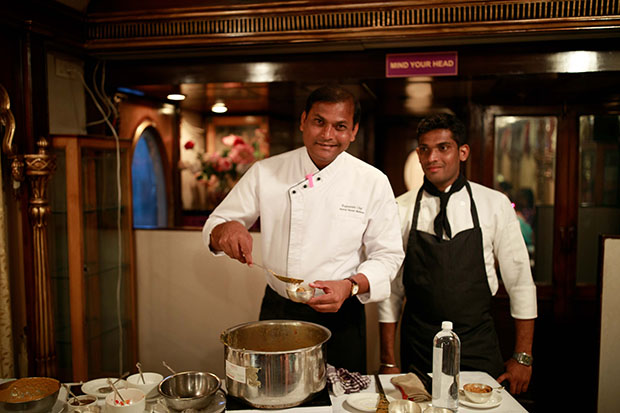 Another thing that felt quite special — that, in fact, is hard to convey in words — was the luxury of lying in the comfort and privacy of my own bed, and staring dreamily out the window as the train traversed through a changing landscape. The whole experience was quite philosophical and entertaining at the same time. 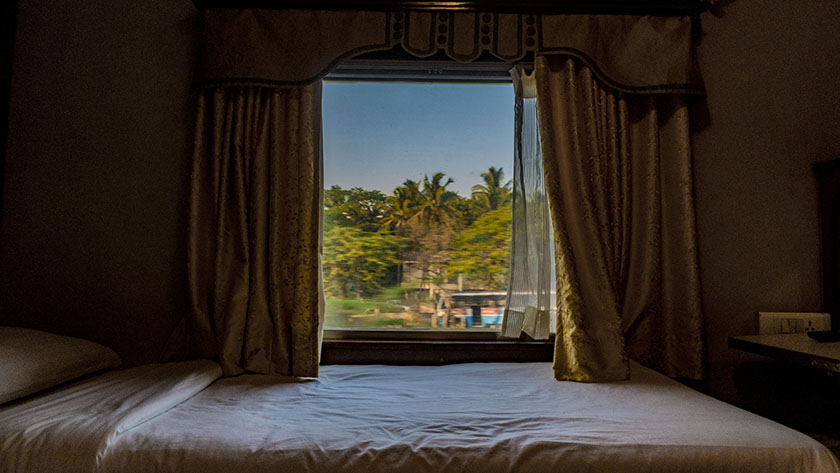 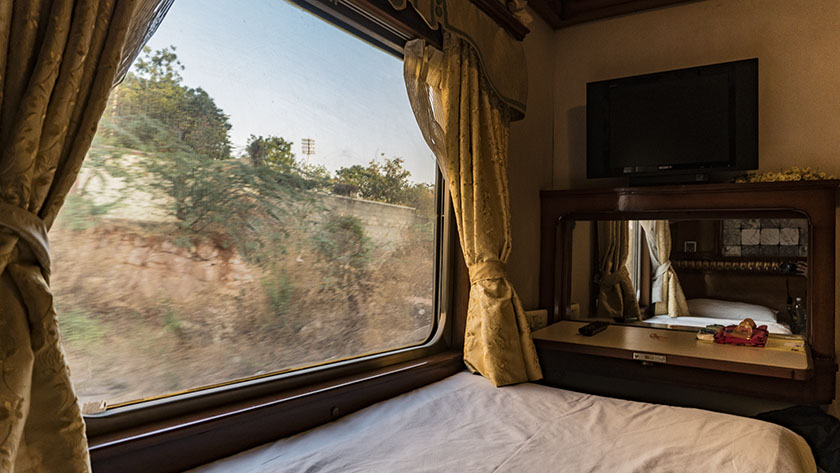 What made The Golden Chariot a go-for experience over the experience of moving around places and choosing a luxurious hotel every night was the ease and peacefulness of having your own room as you slowly shift through places, yet, at the same time, escaping from the need of packing and unpacking daily. Consider The Golden Chariot as your own private moving hotel.

Luxury Train Travel In India: Is It Worth It?

You know the thing about India is that here everything is possible. It’s one of those rare places in the world where you can travel on less than 10 dollars a day or end up spending over 10,000 — all you need to have is the pocket for it, and India can spoil you to the extremity. And my experience with The Golden Chariot was something just as similar. In almost a week, I was spoiled to a point that normal life started feeling unbelievably normal. From the welcome ceremony to the farewell, everything was royal in its own way.

I remember how on my first morning I was greeted with a knock on the door (by our smiling butler Raj, who later become our smiling ‘friend’ Raj) and the sight of beautiful countryside and green palm trees and open fields flew past. As I stepped down on the carpeted floor and slide opened the door, Raj handed me with our day’s itinerary and humbly asked to be in the restaurant at 8 for breakfast. We were arriving at our first destination Mysore in two hours.

I quickly took a shower and headed to the restaurant car for breakfast. The first experience of eating in The Golden Chariot felt no less a fairytale either. Everything around me — from the golden chairs to the yellow lighting took me back in time. The entire locale was just too opulent to be true for an Indian train. I mean travelling in a train in India that is often an unpleasant, arduous and tiring experience, here I was expecting someone to be making my bed for me as I slowly ate my morning fruits and drank a filtered coffee. 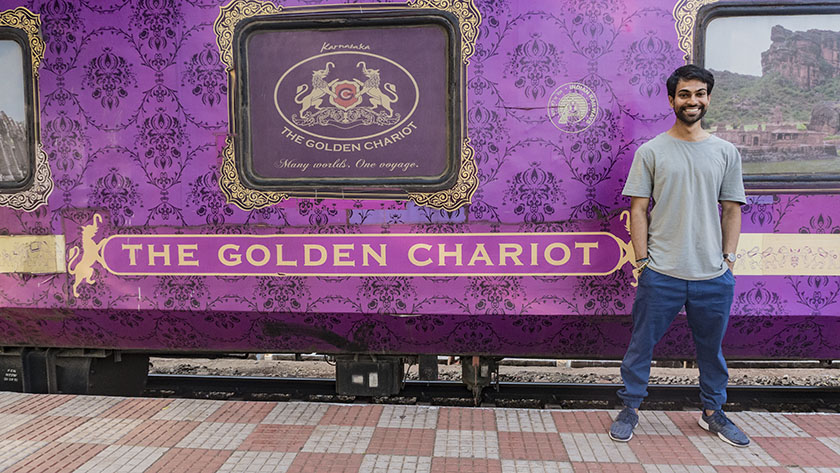 Have you experienced Luxury Train Travel In India? How was your experience?

Disclaimer: I experienced The Golden Chariot on a blog trip with Incredible India. Though my trip was sponsored, all experience and viewpoints are solely personal. I only recommend what I personally experience, and find worth appreciating.