When it comes to telling old folklores or mythological stories, cultural performances like Theyyam can’t be disregarded. There is some kind of liveliness in such performances that not only give life to the original stories but also bring our life to a state of exuberance and enthusiasm.

When you watch a set of people doing complicated dance moves or enacting mythical characters, you get a sense of awe and experience a new reality.

And that is the beauty of such mythological stage plays, with North Kerala’s Theyyam, is no exception.

I happened to visit and click these Theyyam photos during my 1-month trip across Kerala. Out of all the experiences and things I saw (that I have covered in this Kerala Travel Guide) two of the bucket list things for me were watching Theyyam and travelling to the backwaters of Alleppey. 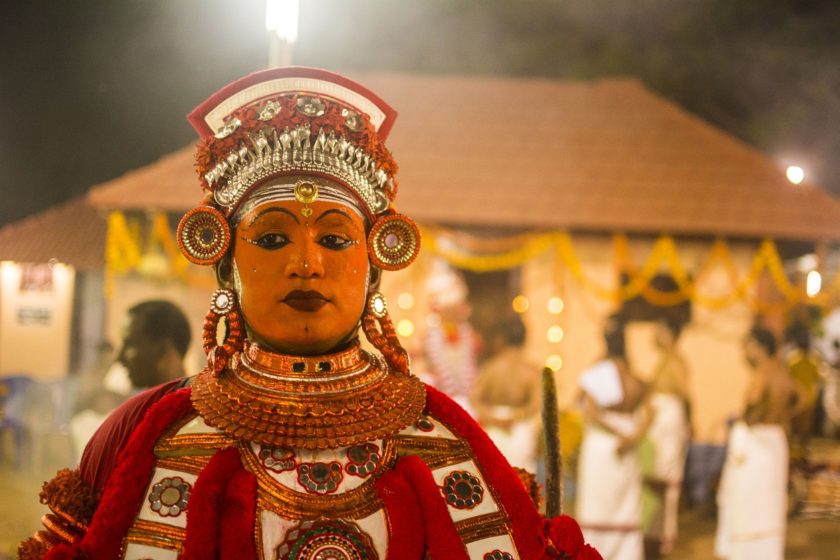 With a series of ritual dance performances incorporating dance, mime, and music, Theyyam photos showcase the ancient tribal cultures, where performers represent a heroic character with divine power. They wear heavy make-up and huge masks that give a dramatic appearance.

The headgear and other ornamental items – that are mostly prepared with bamboo sticks, coconut leaves and colours – look spectacular, in their size as well as in their appearance.

Those who perform Theyyam are known as Theyyakaran.

The origin of Theyyam performances can be traced back to over 800 years.

During a performance, a Theyyakaran completely merges himself with the rhythm and powerful dance moves that goes all the way from giving intense expressions to breaking a coconut with the forehead.

These performances are conducted to remove the perils and bring fortune and prosperity. Mostly performed by men – in their vivid and bizarre makeup – there is one Theyyam form, known as Devakkothu, that is performed by women too.

Where I managed to see only a few performances, in reality, there are over 400 different forms of Theyyam. The performances take place between December to April every year, making these 5 months ideal for any tourist and photography lover, to visit North Kerala.

Other than being one of the most visually impressive forms of art and dance performances in India, Theyyam performances are unique in a way that it is performed by the people of different castes. But that’s not how it was back in the days.

Earlier, when casteism was more rigid, only the people who belonged to the upper rungs of the social ladder were privileged to take part in this festival.

But if you see it today, it doesn’t feel like that. In fact, it very much appears as one of those cultural events where people, as a community, take part.

If you go behind the main stage, to the preparation room, you can see dozens of volunteers, all charged up and toiling with their own duties – as if almost making sure, at their individual level, that the festival gets concluded with nothing but an absolute success.

I saw a man making simple decorations out of banana leaves in the preparation room. Almost 2 hours later, when I stepped back in the preparation room, as one Theyyakaran concluded his performance, to see how it all looked at the backstage, I found the same man, still engaged with his work, as if looking out for some perfection in the banana leaves.

If you are visiting Kerla and looking for more tips on what to see and do there, check my Top Kerala Holiday Destinations. 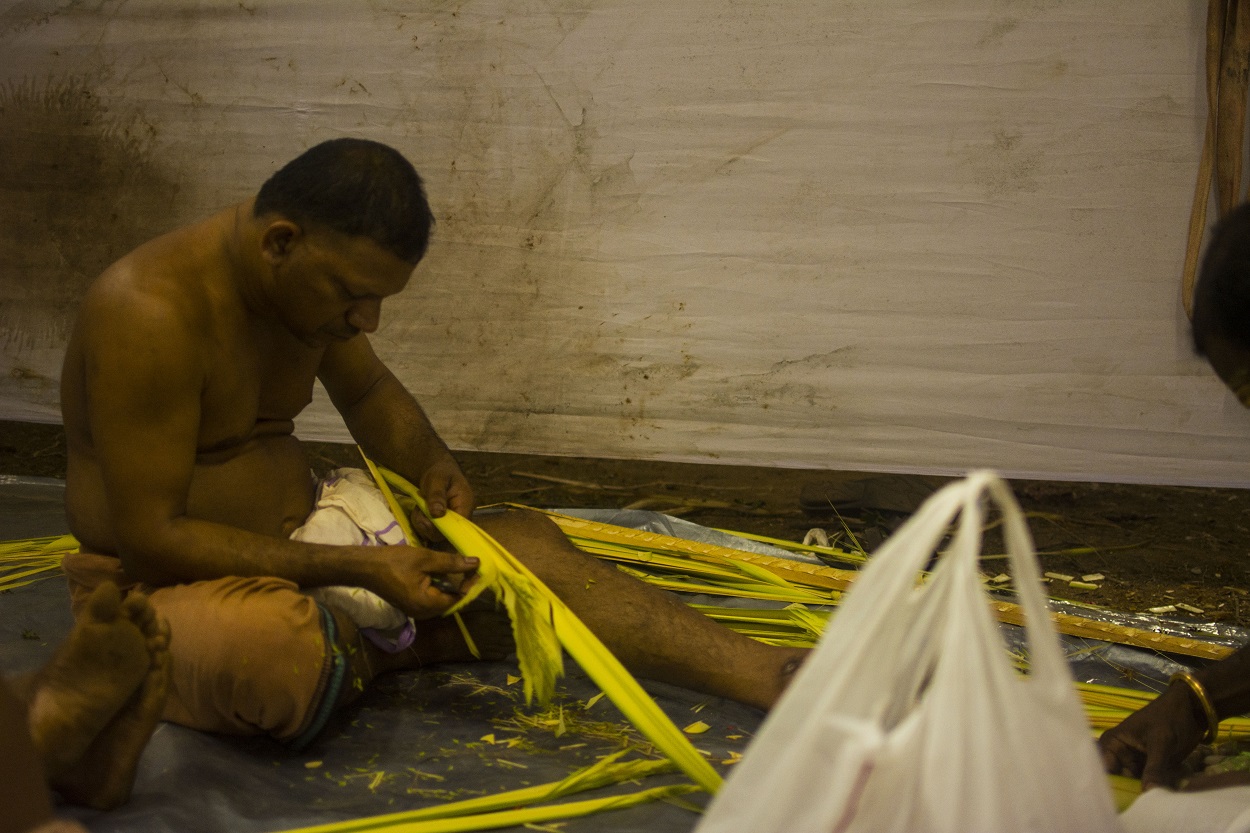 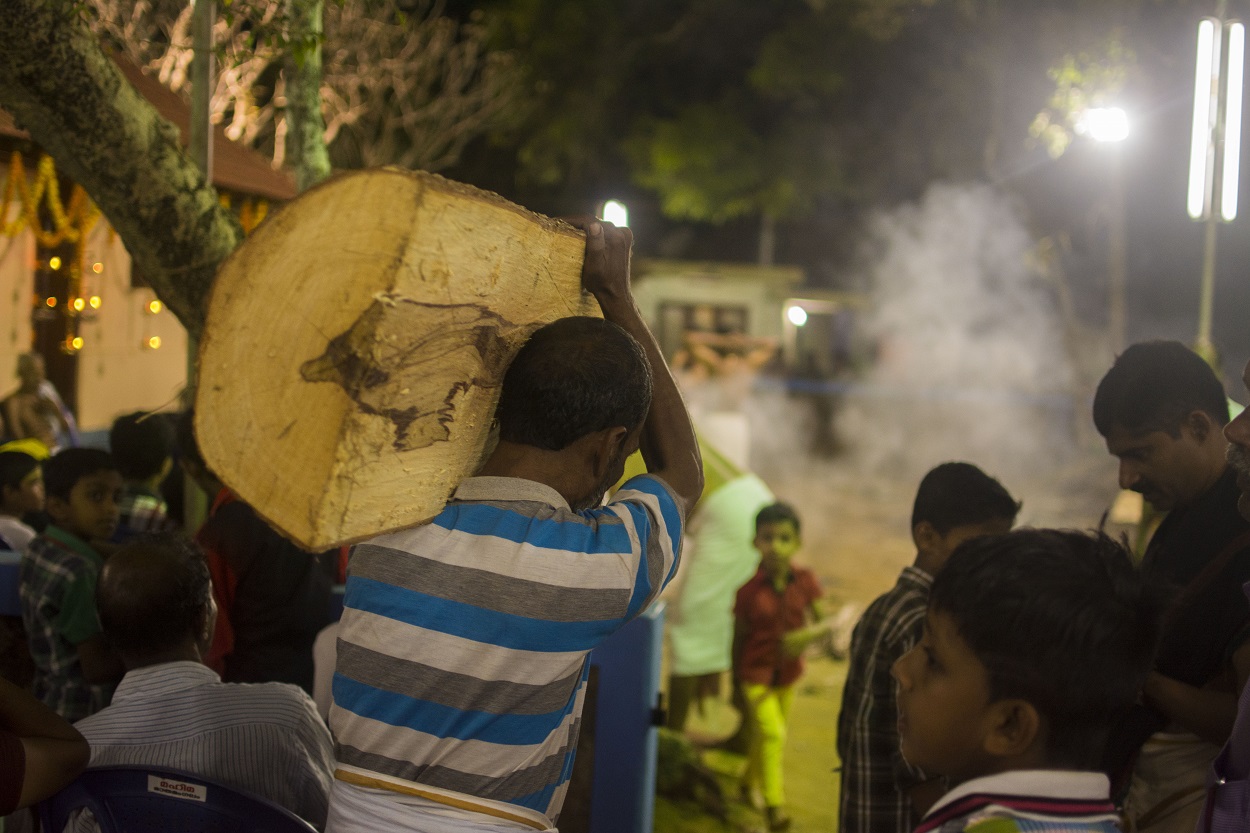 Outside, another dedicated bunch was busy carrying heavy logs of wood to prepare for a big fire-party, while the kids walk about the area, engaged in their own lively conversations, or almost hypnotized by different Theyyam.

To me, the entire night of different Theyyam quotes performances looked more than just a bunch of fancy dance performances. It appeared as one of those subtle gatherings that were meant to bring people together, displaying the simple examples of how society, as one, can work together.

After all, I realized, this what festivals and cultures are meant for — in their true, absolute sense.

Now that we have understood a bit about the history and what this art performance is all about, let’s take a look at some of these Theyyam photos and get a visual idea of what to expect: 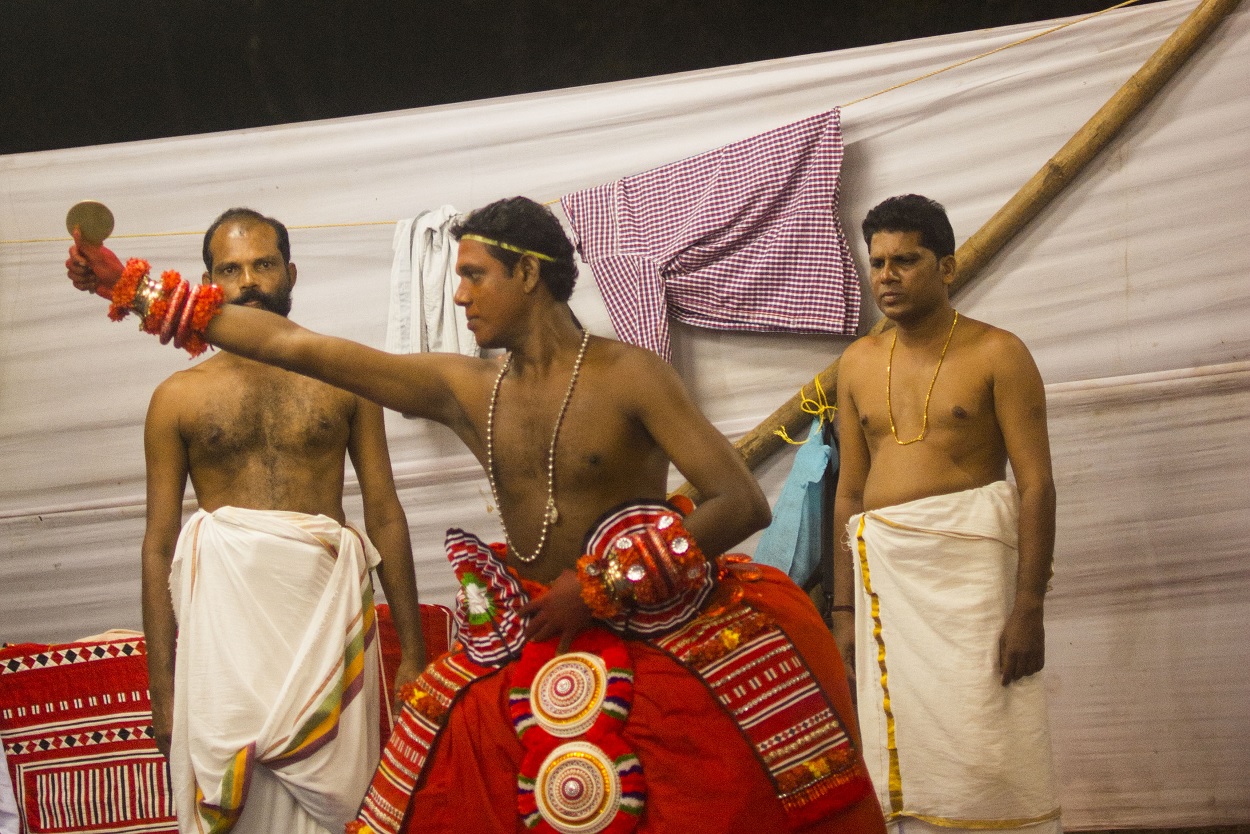 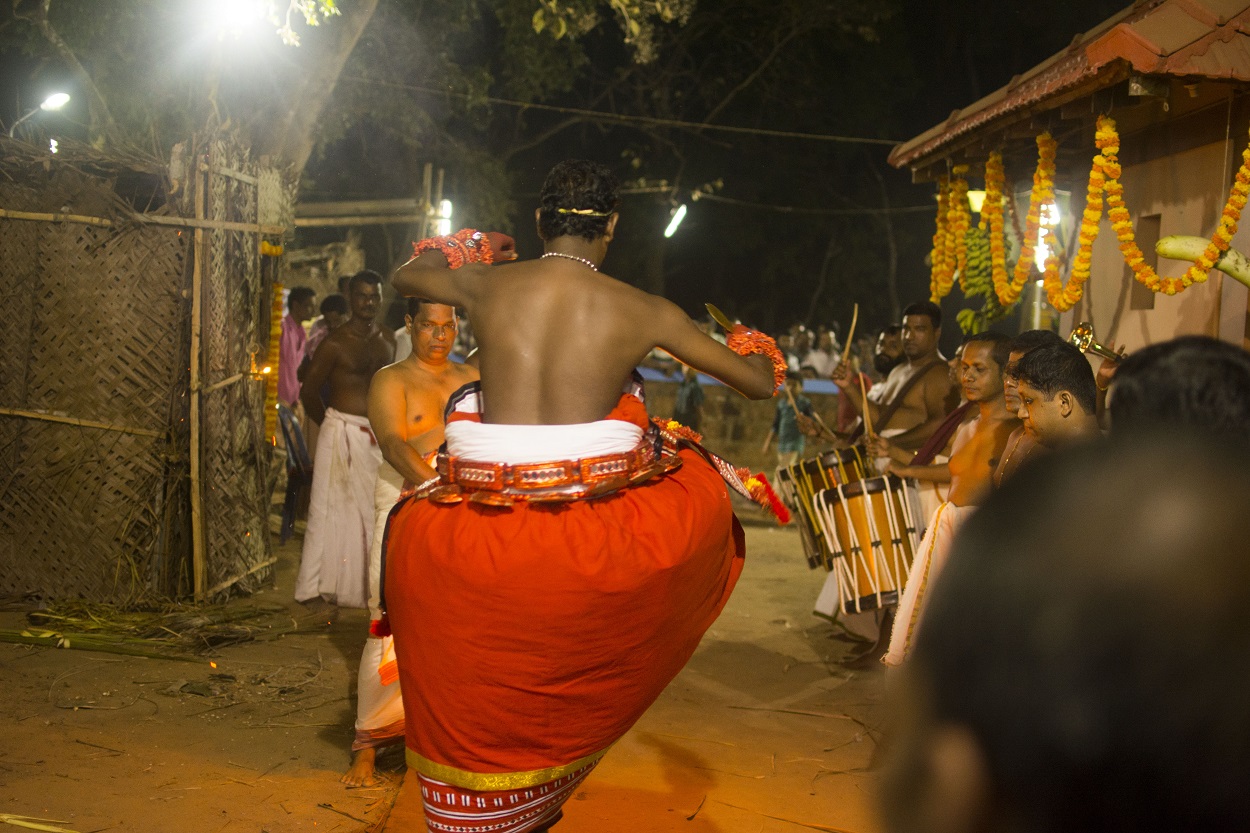 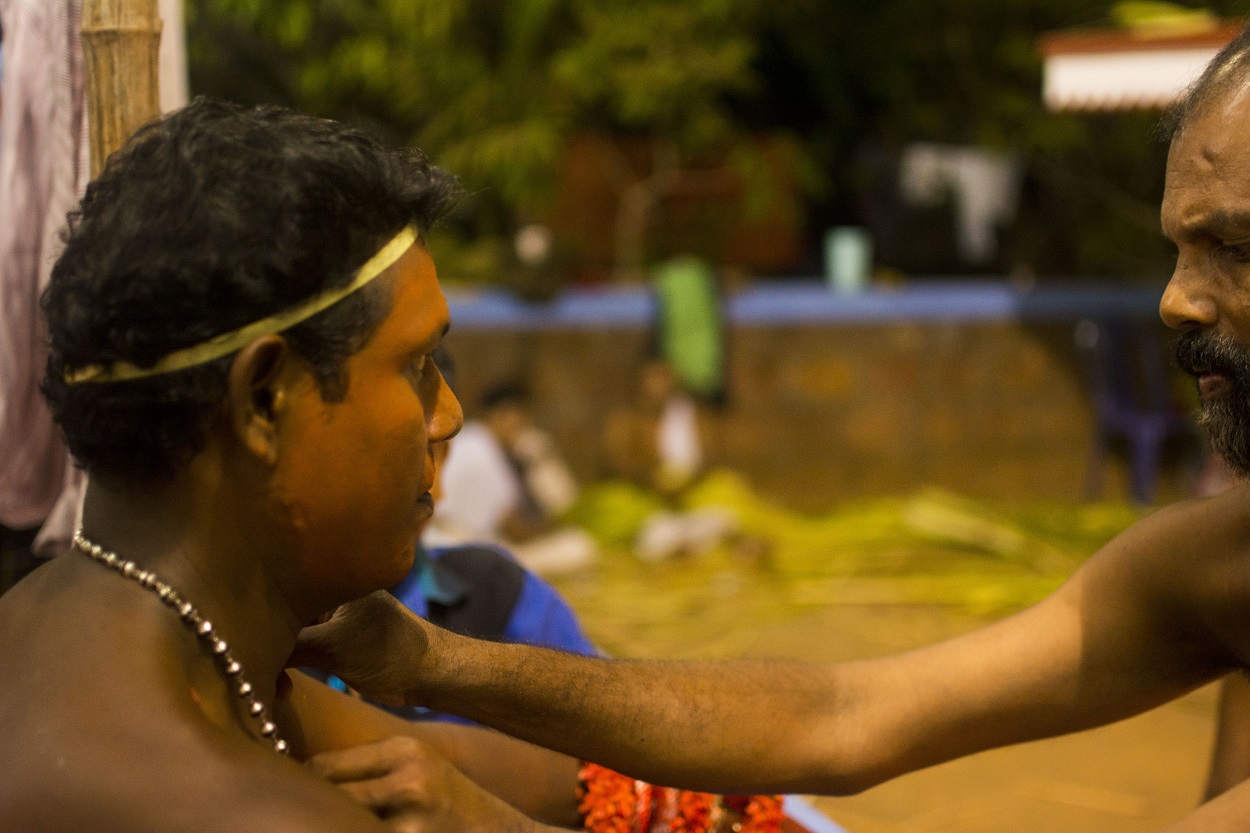 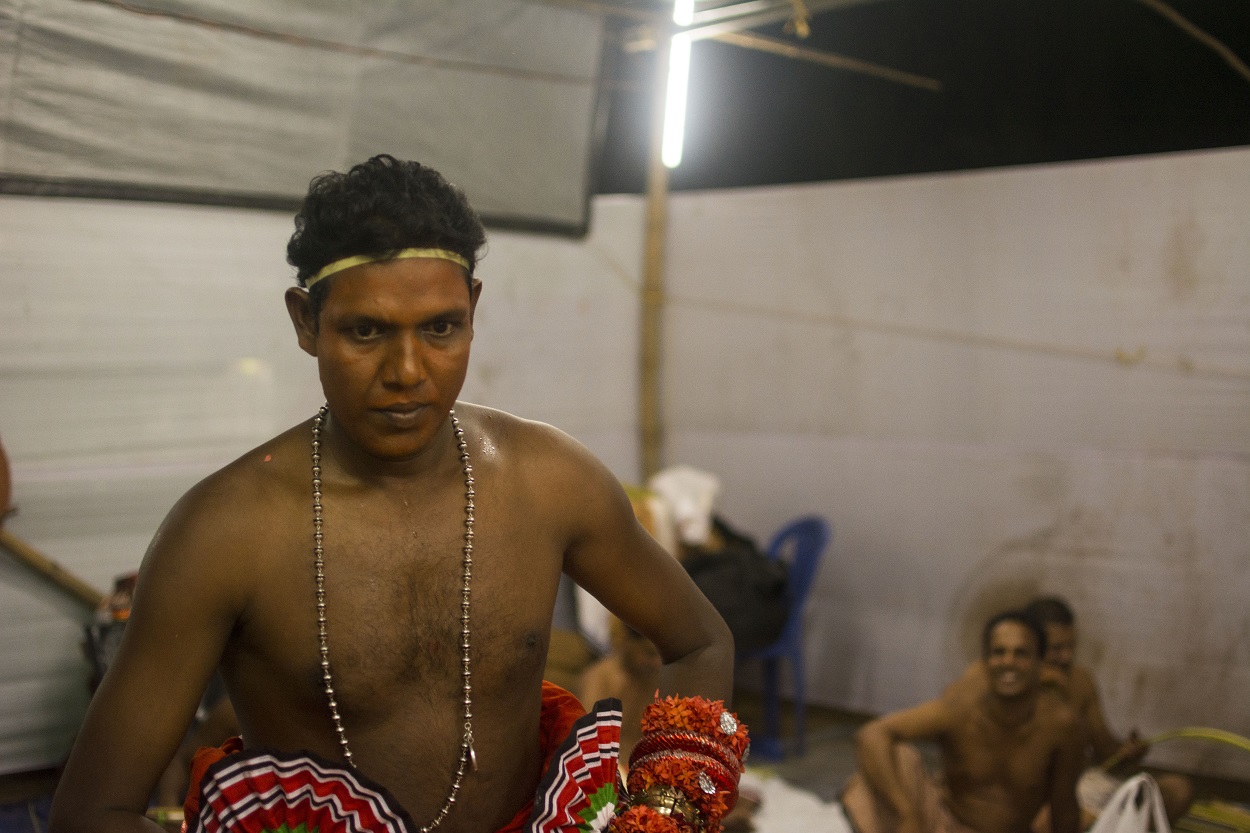 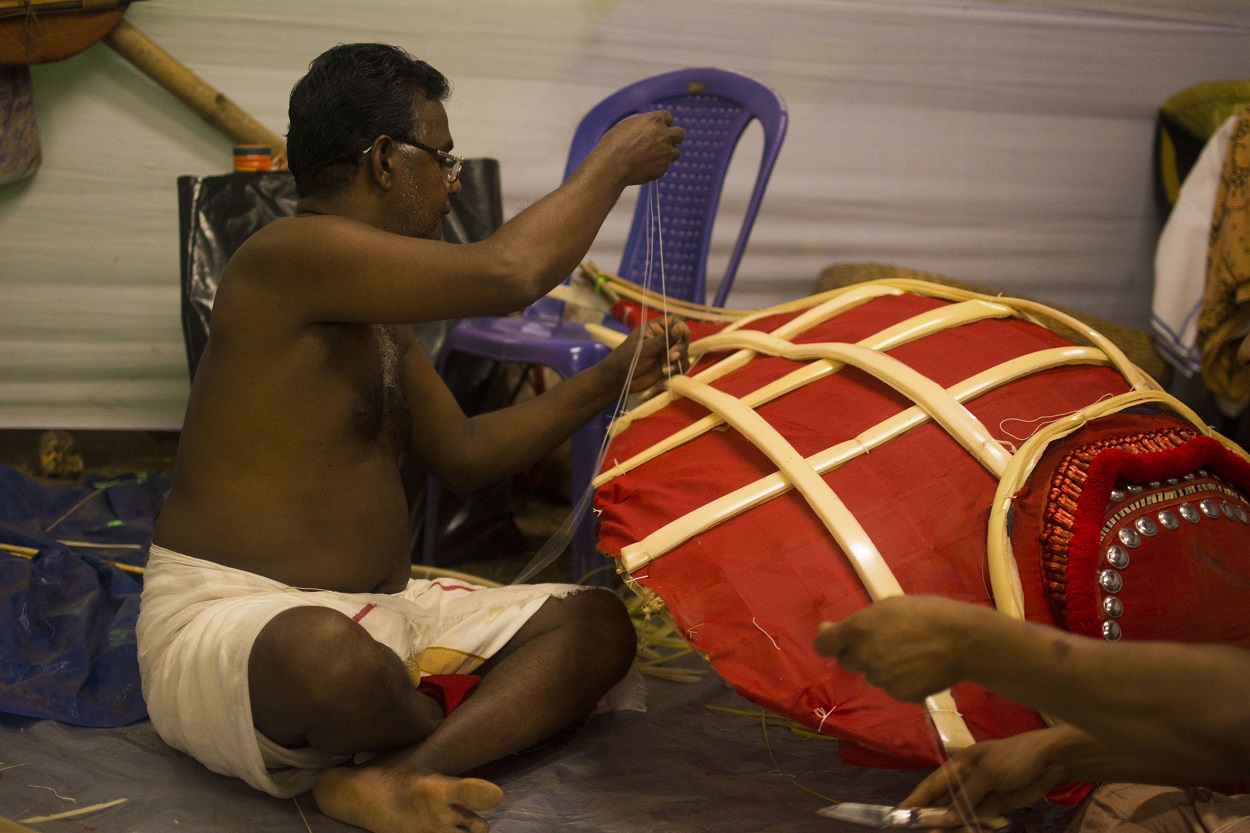 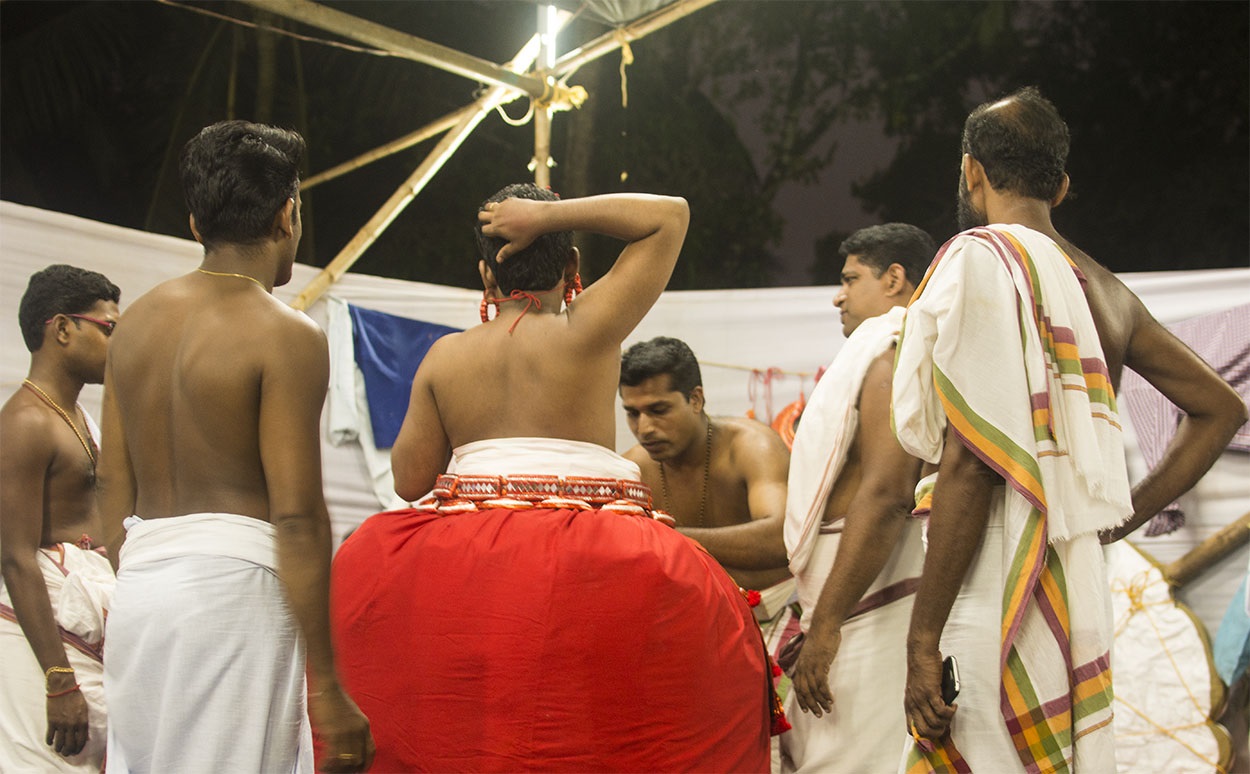 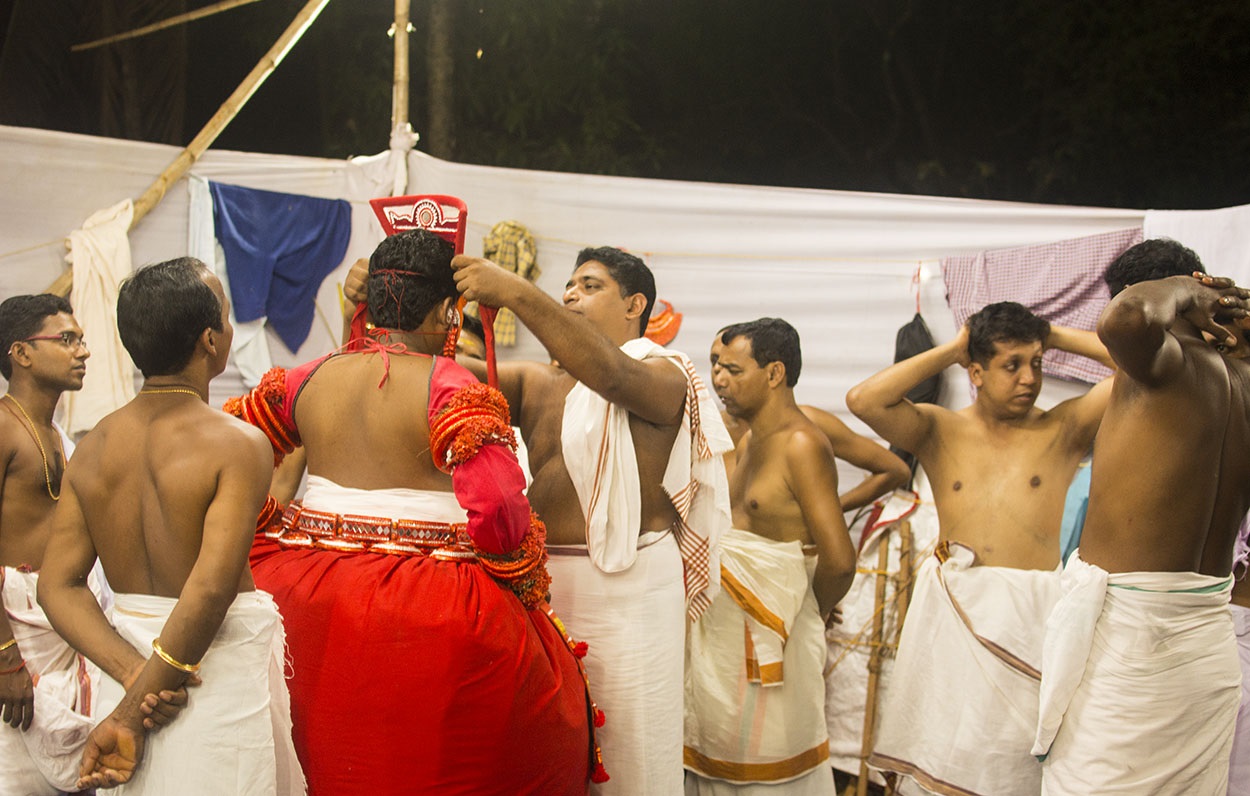 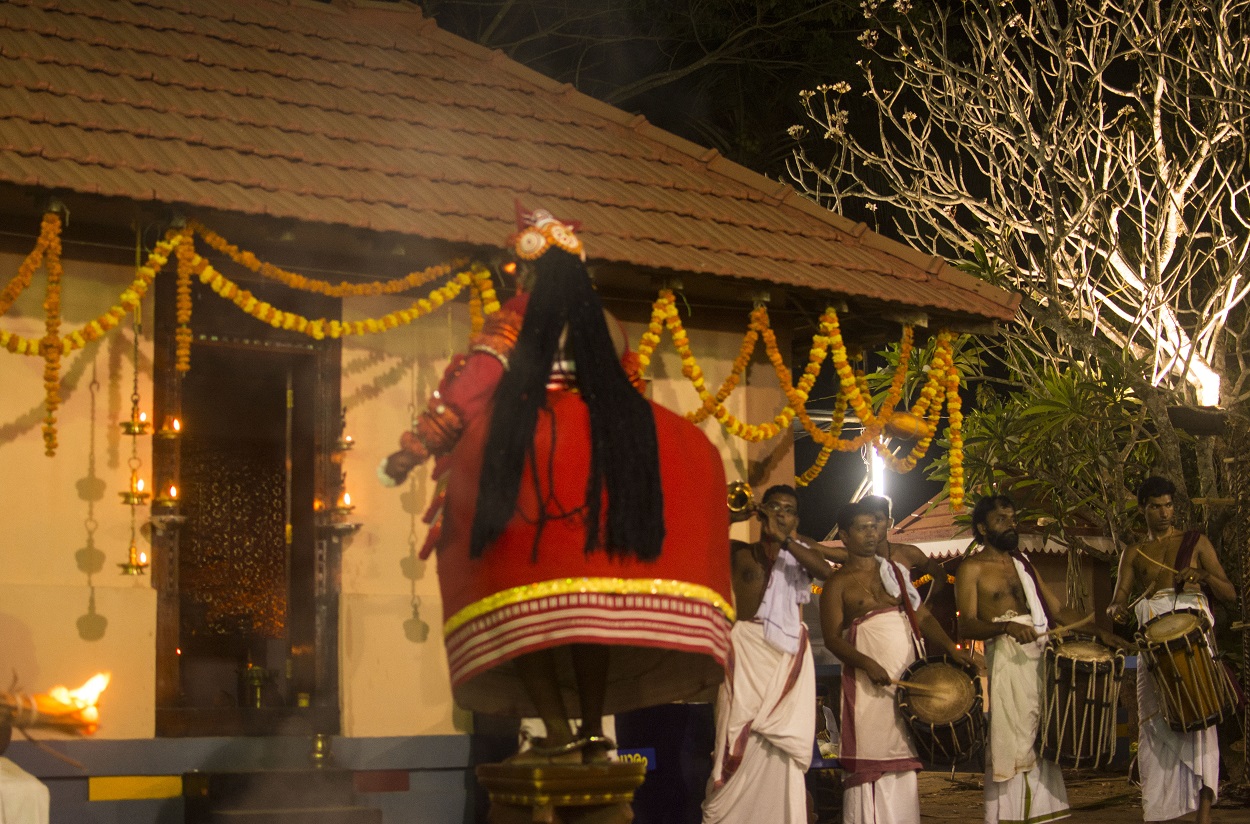 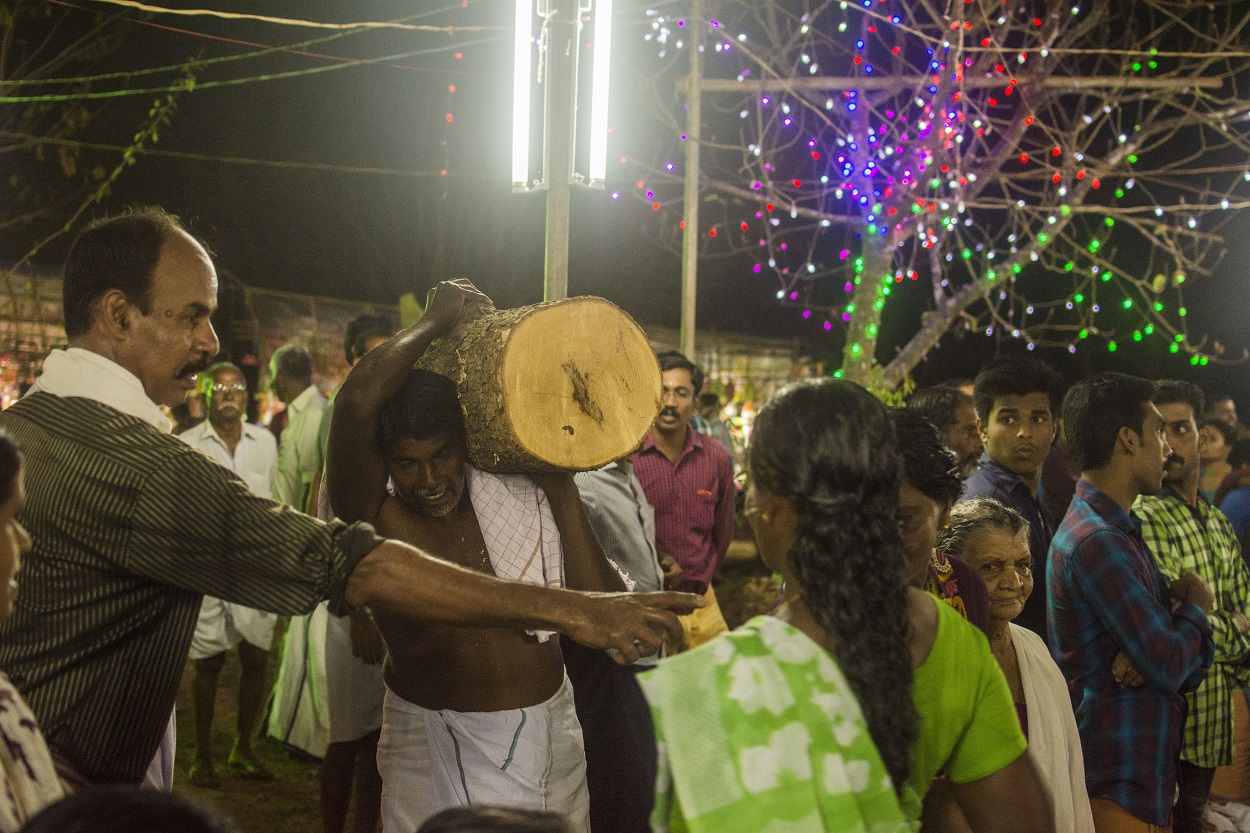 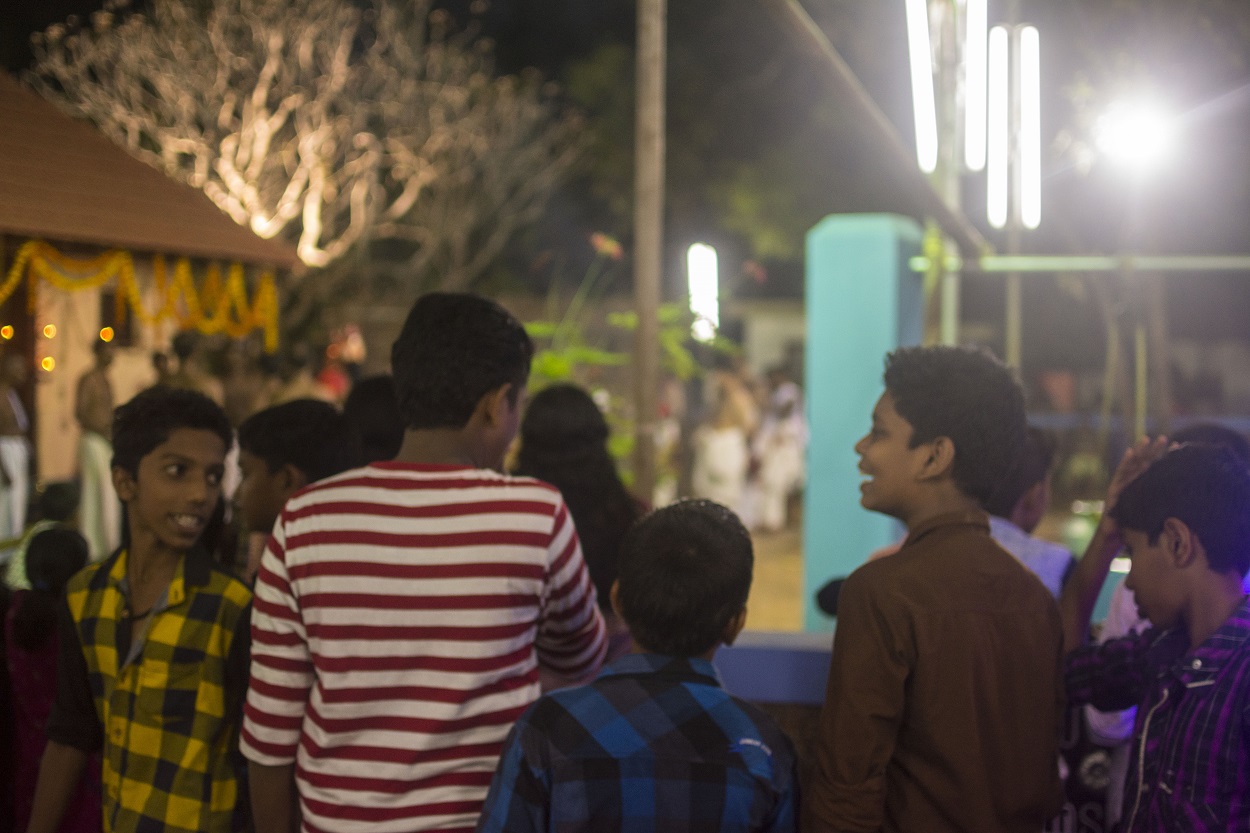 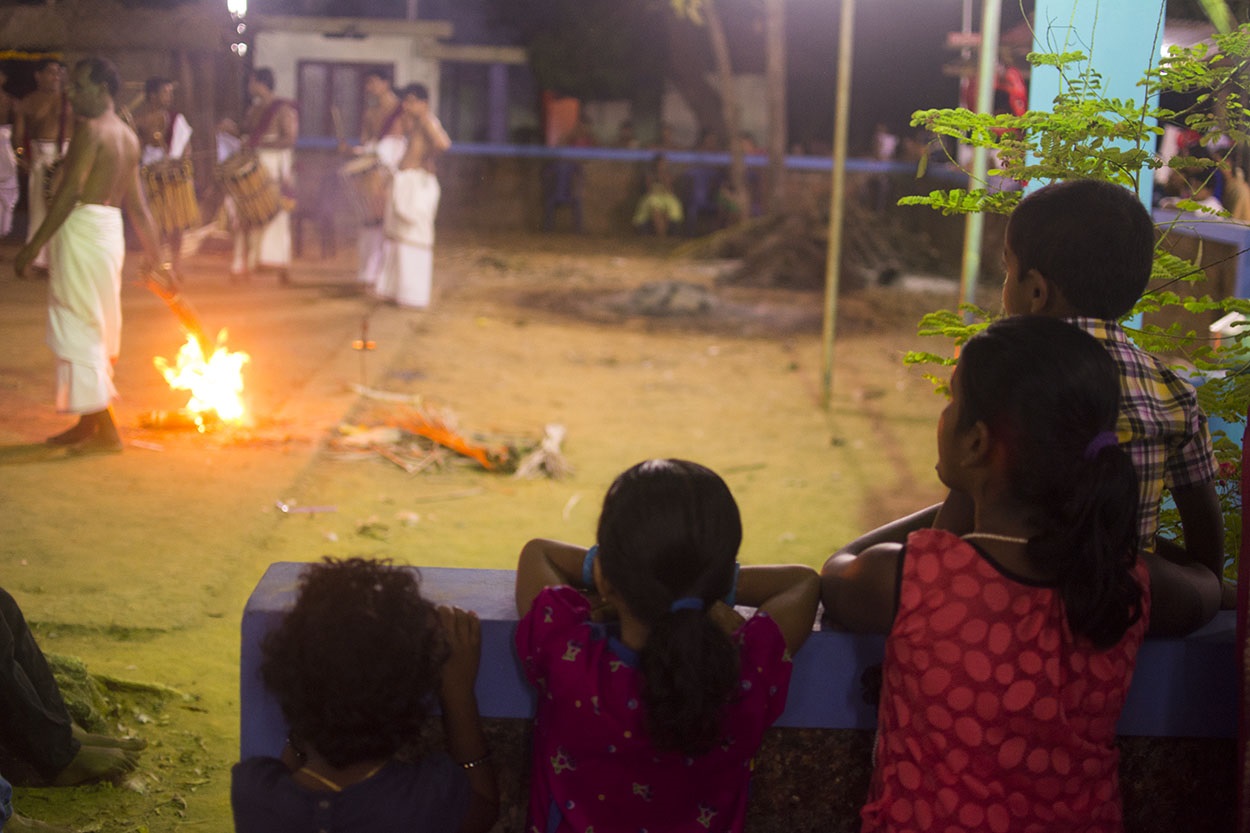 As I said above since the performances take place between December to April only, and that too in the North Malabar region of Kerala, you need to visit during one of these few months only.

If you have seen Kathakali and compare the two, let me tell you that you are doing it all wrong. Where Kathakali is more about facial expressions and comparatively subtle dance moves, Theyyam is more aggressive. It is also much less commercialised, unlike Kathakali.

So yea, if you happen to visit Kerala between December and April, don’t miss a chance to experience this unique art-form of Kerala.

Have you seen Theyyam or any other art form in Kerala? How did you find it?

And now, for a tip, I want to tell you that accommodation is fairly expensive in Kerala. Even the most basic places charge at least 100 Rupees. So if you are a budget traveller check my budget travel tips. Also, see how to find cheap accommodation in India.