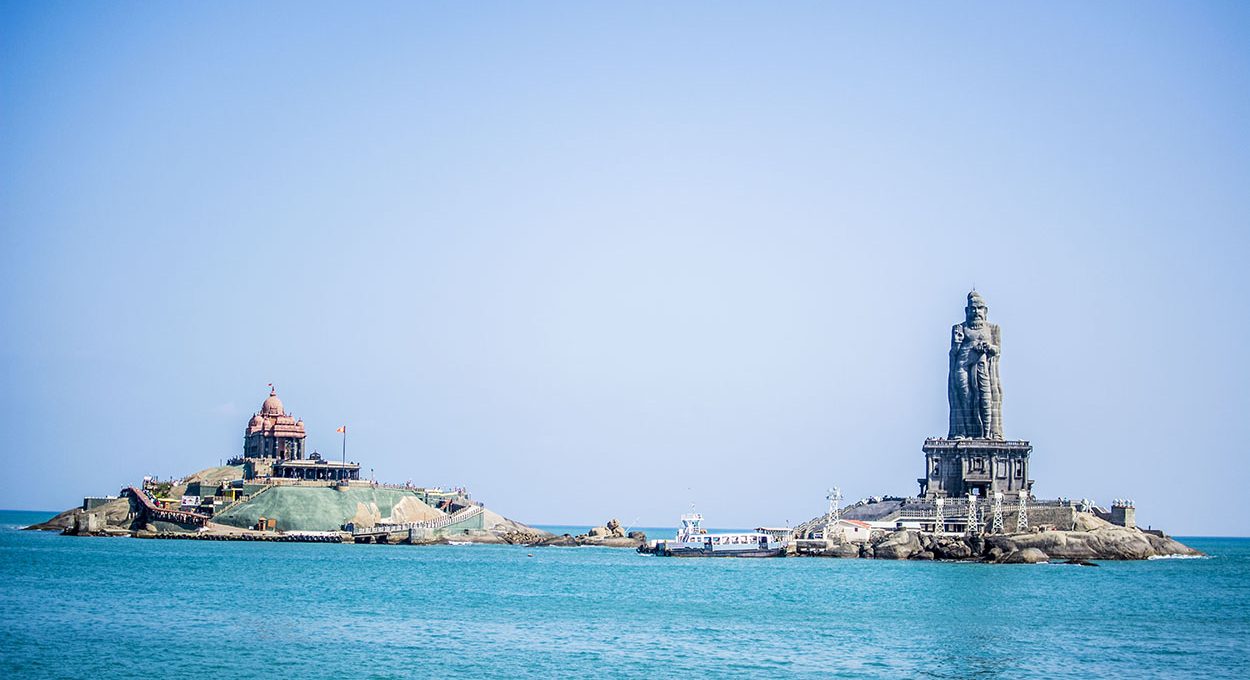 Read this Kanyakumari travel blog and find out what to expect from the place!

When you visit a place what is that one thing that you look out for, the most?
That vibe that makes that particular place unique.
Sure you want to have a good time and follow your own way of travel. Those, who are all into leisure, for example, may look for a place to relax, a beachside resort, when travelling someplace in South India. But you also want to live that experience, that vibe, that the place you’re visiting is popular for.

When I came to Kanyakumari, I was expecting the same. I was expecting a place, much tranquil, surrounded by sea, with no traces India’s confusing and muddled mainland. After all, this is where India concludes and finds itself gracefully surrounded by the mighty and the endless Arabian Sea, the Indian Ocean, and the Bay of Bengal. 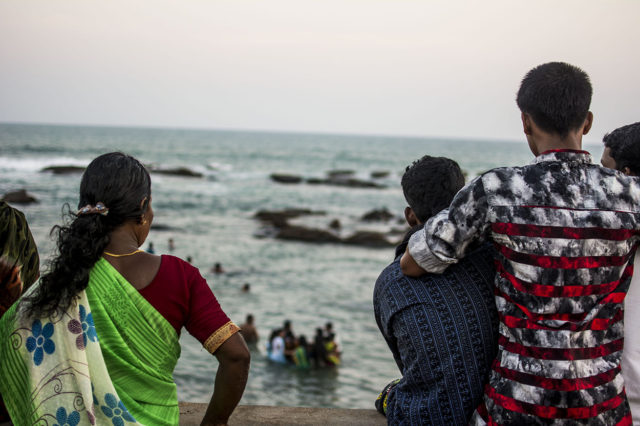 But when I arrived there to write this Kanyakumari travel blog, expecting tranquillity and the beauty of ocean I was left disappointed. I felt no tranquillity in there.

Neither did I get to experience the deafening seashores as I perhaps expected. One thing that I found in abundance, however, was all those short (and periodic) glimpses of the sea, every time I peeked through its never-ending, choked markets and multi-story guesthouses, staged right next to the seashore. 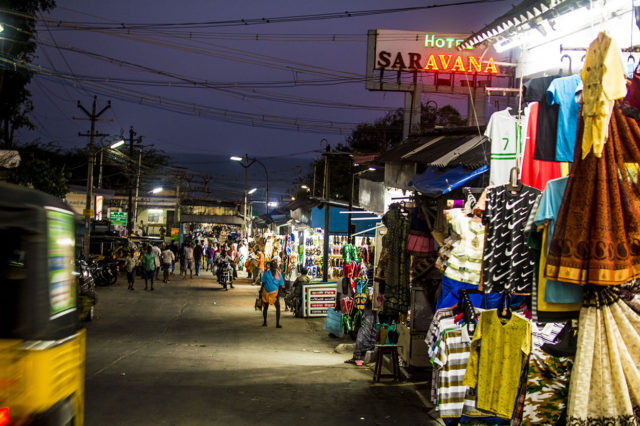 And when, at times, I somehow ended up on a beach, I found it perfectly intertwined with confusion and excitement of thousands of tourists that come here every day, as if trying to diminish the ruling authority of the sea. 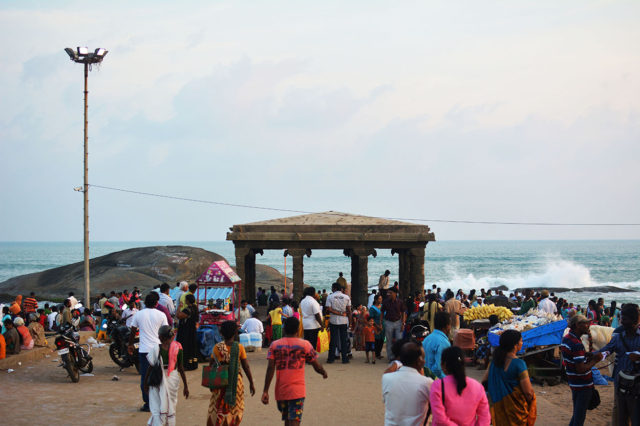 There were street sellers of all kind – artists holding a conch, lovingly in their hands and gently stroking it with their painting brush; middlemen luring tourists with fake jewellery or fake tiger claws. 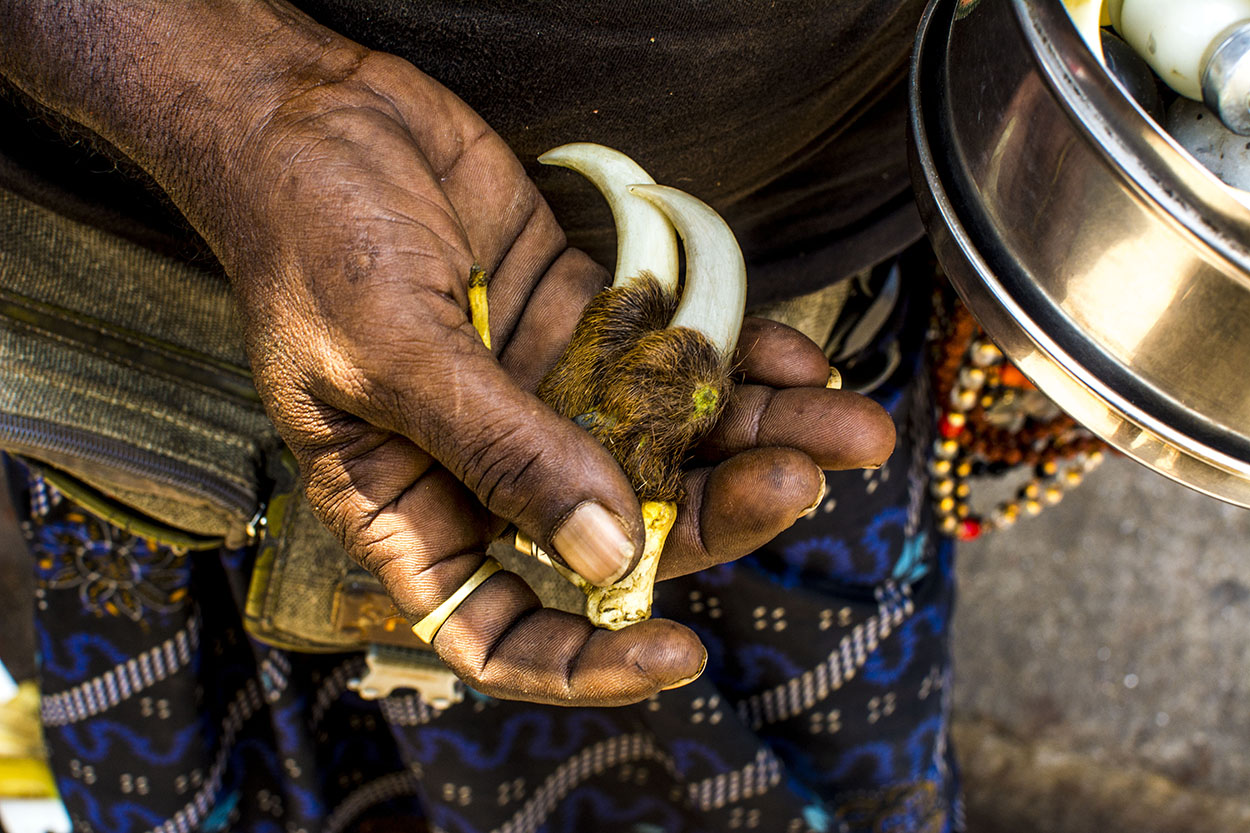 You also don’t find yourself good public transport to Kanyakumari from any of the nearby town. Road transport in Tamil Nadu is bad, and so is the train connectivity.

Kanyakumari has a deep-rooted history. From thousands of years old Devi Kanyakumari Temple to the much recent Vivekananda Memorial – this is where legends and myths merge into one.

As suns sets, leaving the sky into complete darkness, except for a few twinkling dots, the temple starts glittering with diamonds. And it glitters so perfectly that according to locals, ships often find themselves veering off from the course, assuming it to be a reflection from the lighthouse.

I found Vivekananda Memorial as the only reason why you want to visit Kanyakumari, and that reason, in itself, is significantly enough. As you walk about the memorial, you feel the energy that Vivekananda must have felt at the time he meditated on the rock. 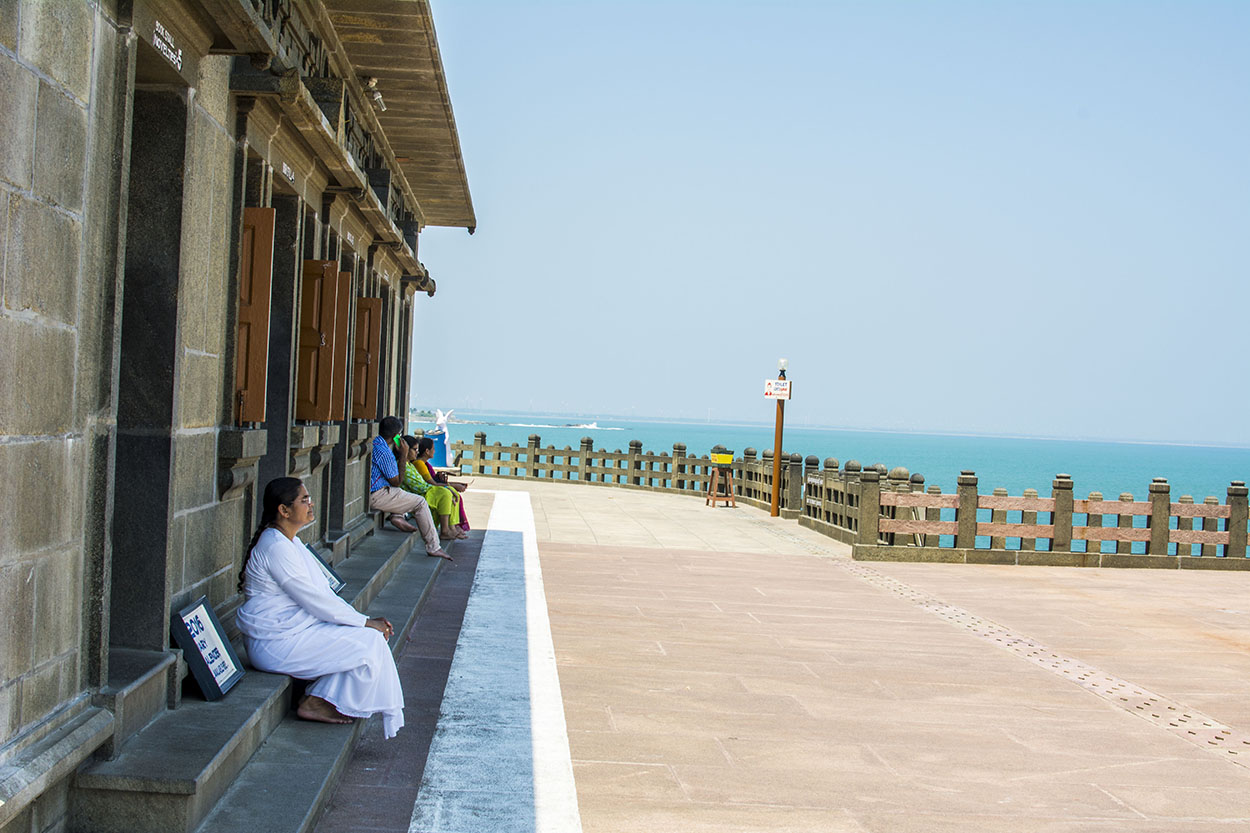 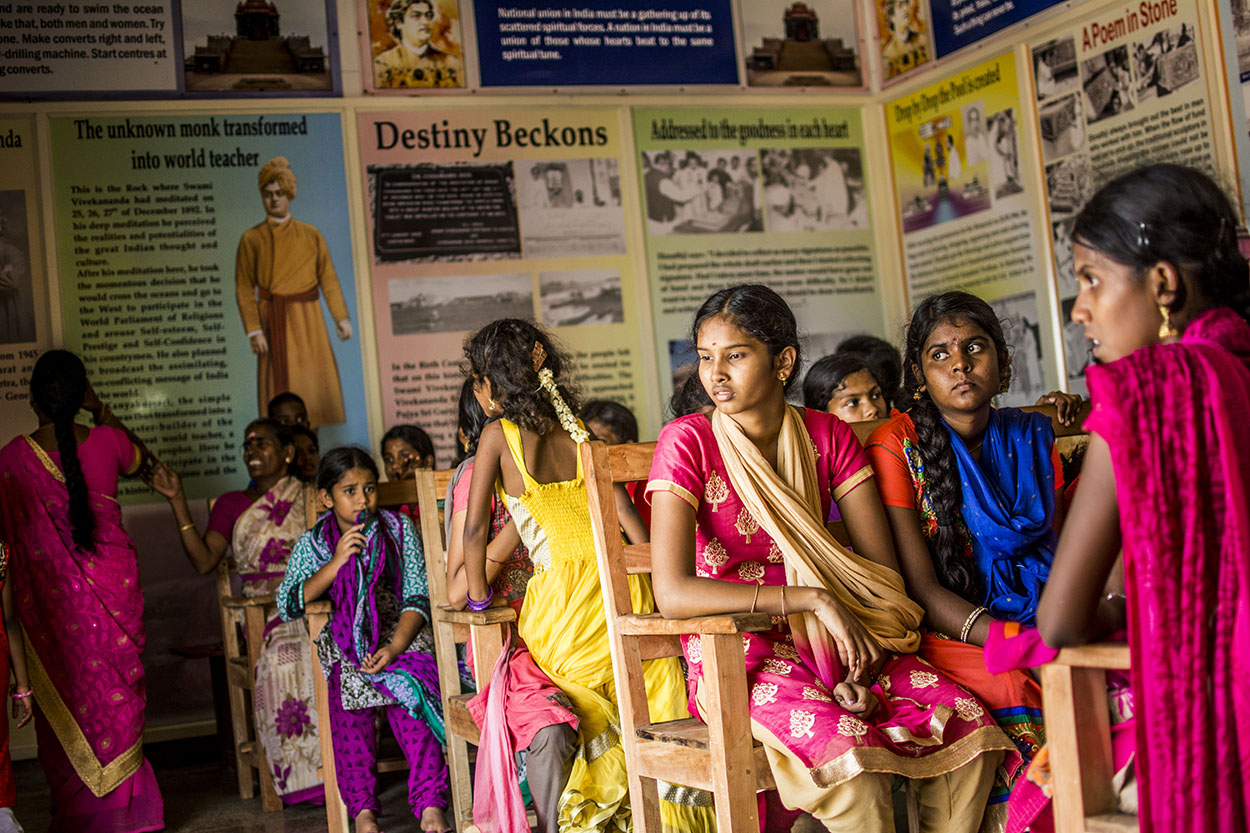 The rock is surrounded by the ocean. On one side you see nothing but the gigantic ocean, looking deep into the never-ending blueness – as if there exists a different world that we can never experience doing our time on land. On its exact opposite, you find the fading hills, almost bidding a farewell to us, or perhaps welcoming us, in their own way.

No wonder, Kanyakumari is one of those rare places that invite us for a secular Sabbath despite its much muddled, confusing atmosphere. 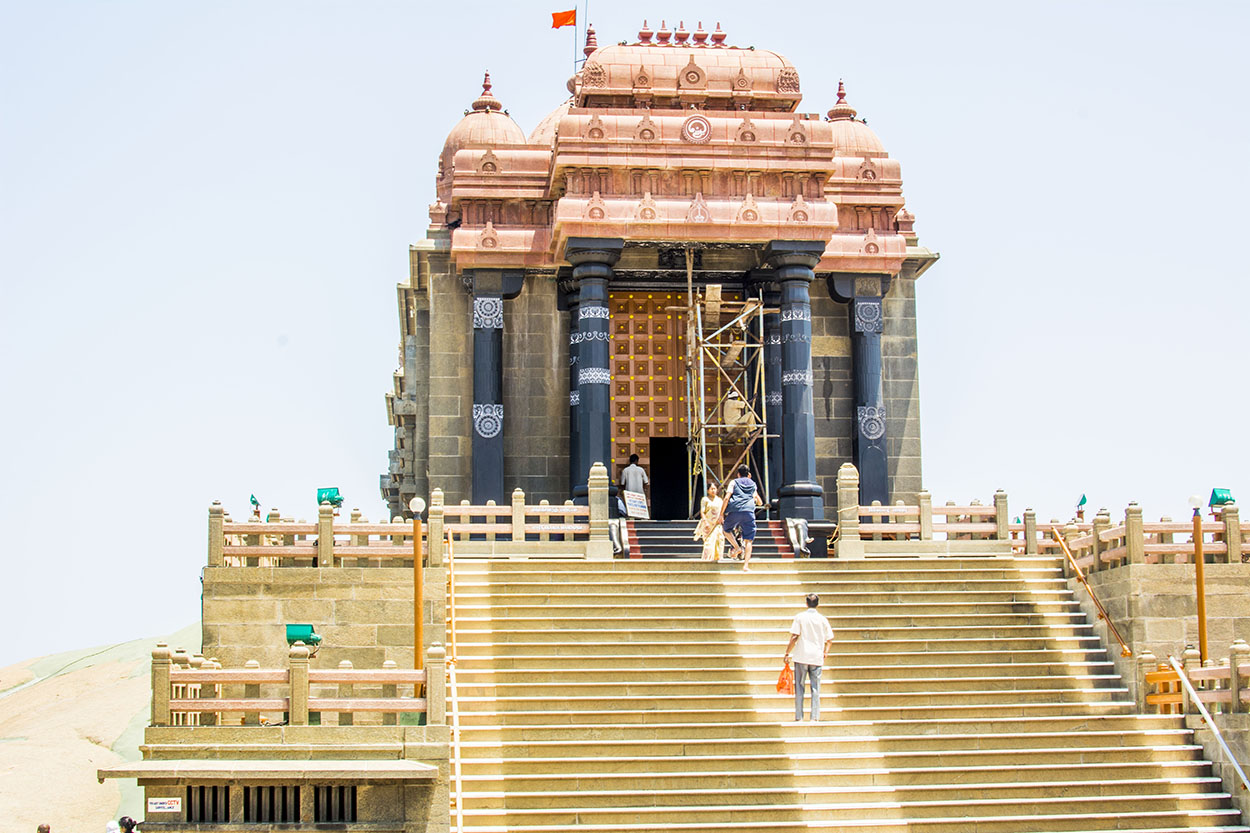 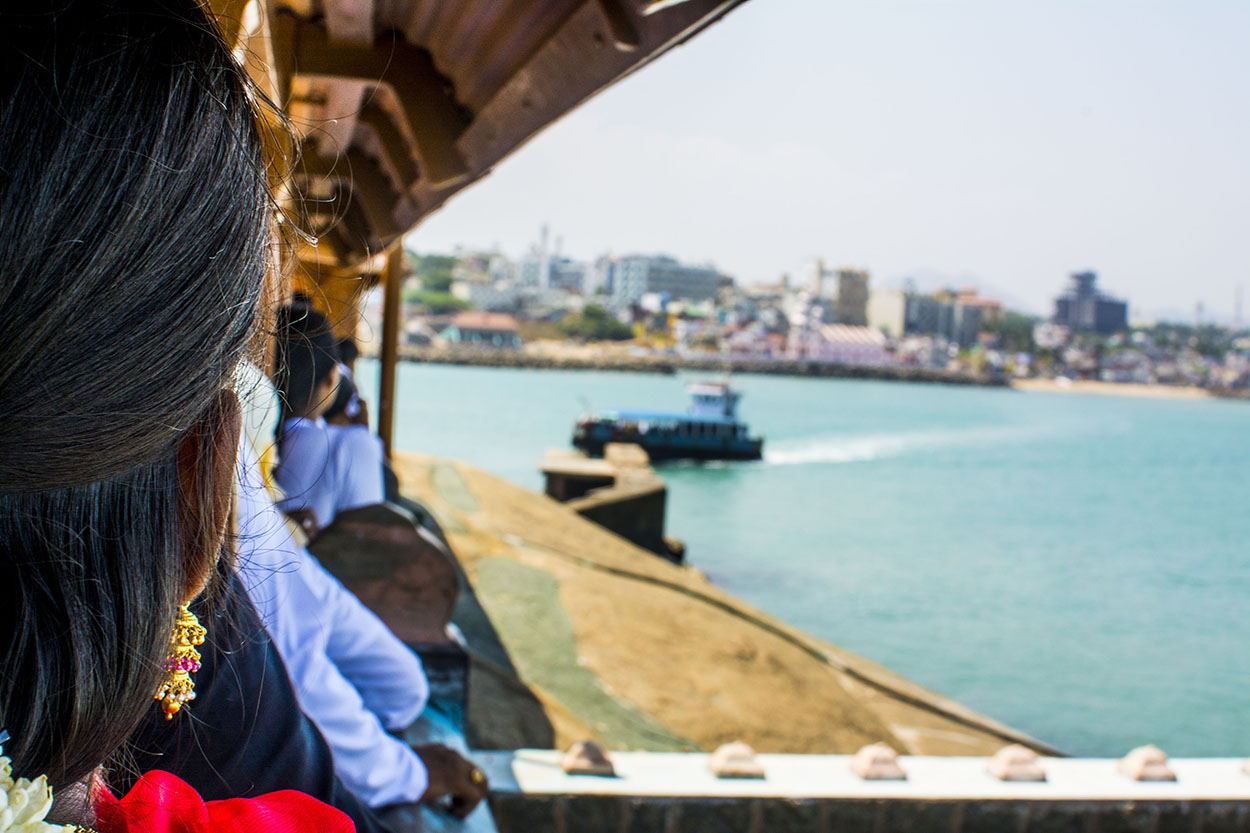 A meditation hall also stands inside the premises of Vivekananda Memorial, at the exact spot where Vivekananda meditated back in time. Though that’s a different thing that ongoing tourists sometimes make it just too tough for you to find some peace during the visiting hours of a wee day.

Where today you pay 34 Rupees and enjoy a 10-minute ferry ride to the rock, it is believed that Swami Vivekananda swam across the sea to the rock for deep meditation and enlightenment, during which he perceived the realities and understood the potentialities of great Indian thought and culture. This is when he decided to cross the oceans and go to the West to participate in the World Parliament of Religions, before becoming a great teacher, of all times, for his own countrymen and for the rest of the world.