My visit to Padavedu happened because of a media Invitation by Srinivasan Services Trust. I was invited to learn about sustainable living and community-empowerment initiatives run by them. The basis of my learning and experiences, here’s a travel blog on Padavedu Village, in Tamil Nadu…

Throughout all these years of travel, I have learned that every city, every town, has its own charm. You visit Dharamshala, in Himachal Pradesh, and you get a sense of reverence in its air. Shimla and Chail, despite being located in the same state, have nothing to do with reverence. So when an invitation to visit Padavedu, a place I had never heard of before landed in my inbox, I decided to go and check what it was all about.

Padavedu is a cluster of villages centrally located among Vellore and Thiruvannamalai, in Tamil Nadu.

My visit to Padavedu turned out to be one of those experiences when you end up learning something useful in life — a kind of experience that helps you grow just as much within as without. 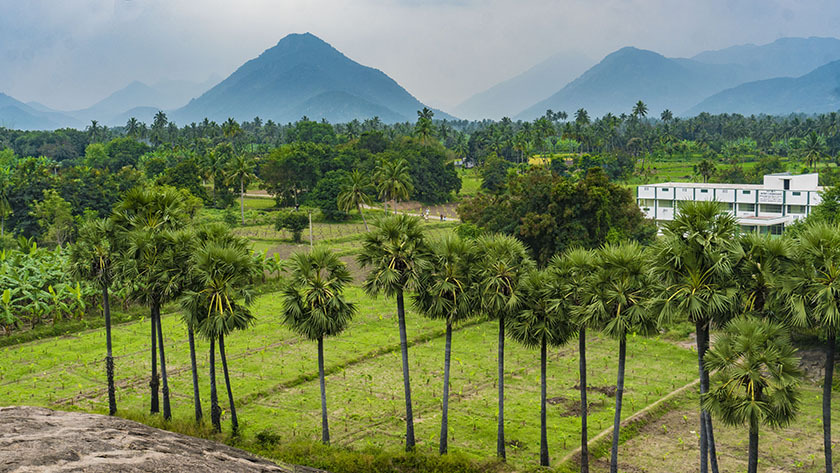 The idea was to learn a bit about sustainable living and various community-empowerment initiatives run by Srinivasan Services Trust, or SST, in Padavedu.

From pottery making to basket weaving, individual money-generating activities to community services (like waste management and healthcare and education) SST teaches people different skill sets, and in the process creates an ecosystem, a testimony rather, for how if people work together as one force, they can really shape their tomorrow better. 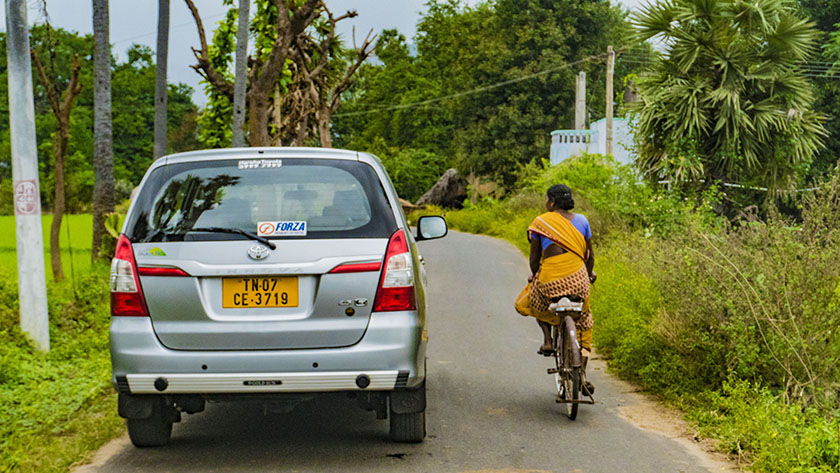 Padavedu — just like thousands of other villages adopted by the Srinivasan Services Trust, in five different states across India — is an ideal example of a progressive India!

One day was definitely not enough to understand all that SST has been doing for local communities, and neither was it enough to explore Padavedu.

In less than eight hours, we were taken to a family that was now solely dependent on pottery, a local Balvadi (a pre-school) that seemed more efficient than any privately owned pre-school I had seen in life and a self-help group of women who were relying on income weaving baskets out of banana leaf fibre.

We also visited a few 12th centuries excavated temples in the region that are now fully-funded and looked after by SST, in Padavedu. 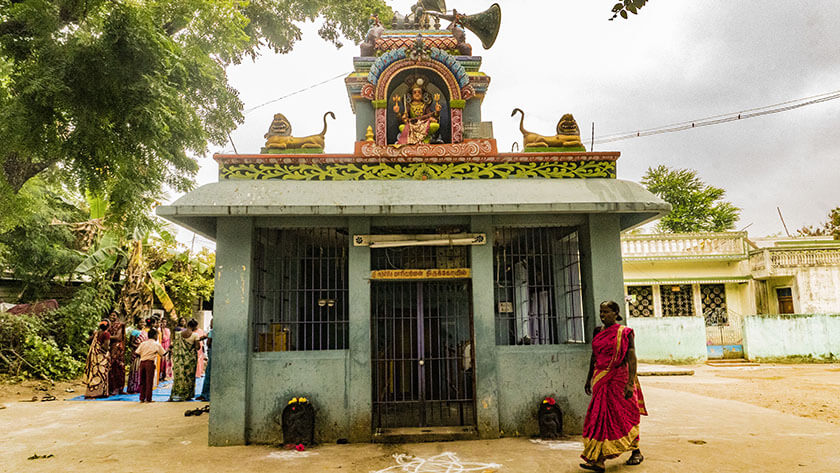 I have heard, if put in good hands, local NGOs can transform communities, but to see it all and experience for the first time, with such purity, was overwhelming.

We kickstarted our day by visiting a local family in Keshavapuram, in Padavedu. Sekhar and his family were pretty much solely dependent on pottery since SST introduced pottery as an effective source of income to them. They create different earthenware including flower pots, vases, kitchen crockeries like pots and pans and occasional, pen/candle stands and smaller artefacts. 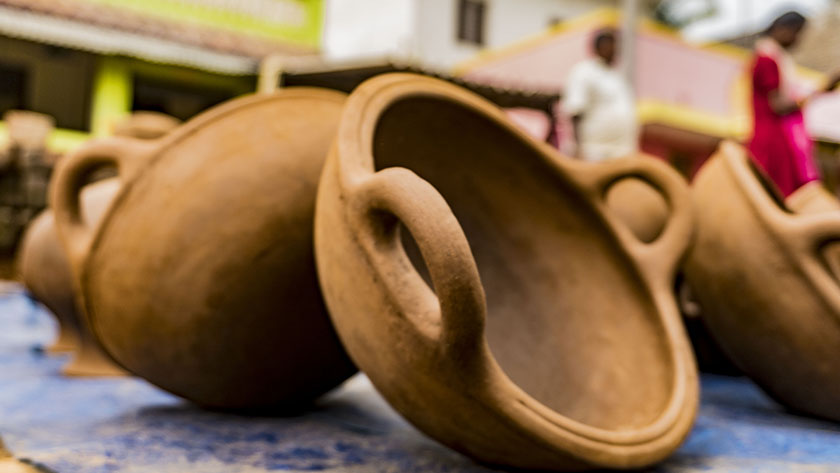 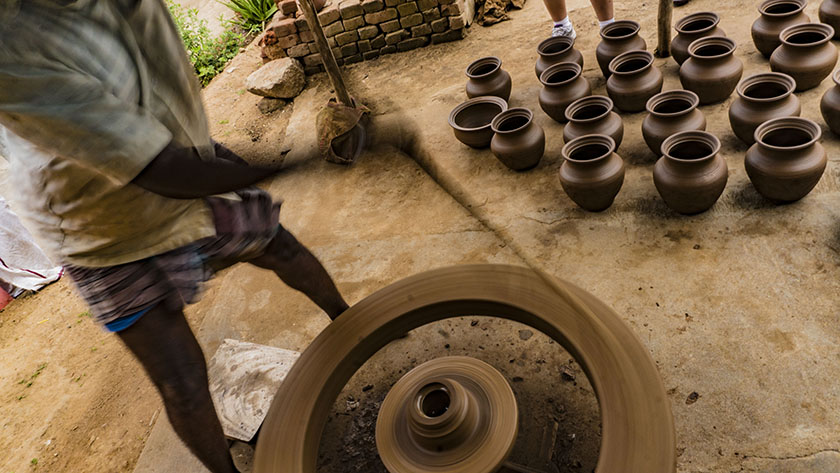 How SST comes into the picture, other than teaching the skill and providing the basic hardware including the spinning wheel, is by providing bulk orders to the families, in addition to whatever small business they generate on their own. 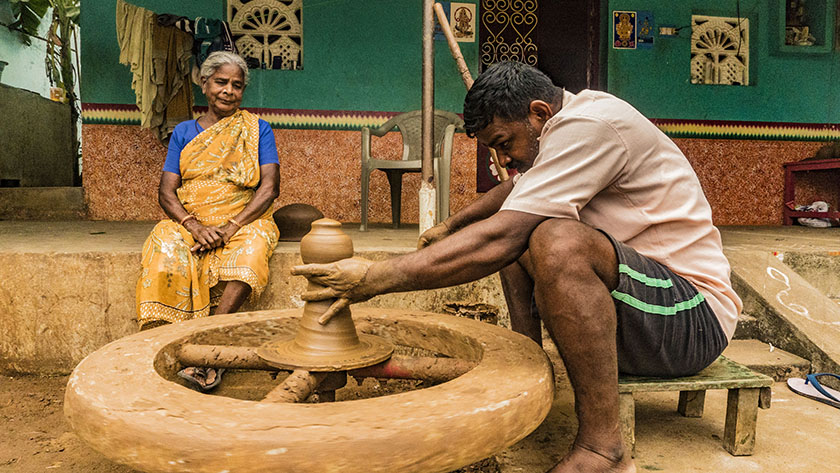 A flower pot costs approximately 50 Rupees, whereas something smaller around 20 Rupees. Cooking pots and pans about 100 Rupees.

I was told, as I tried my hands creating a small oil lamp for myself as a souvenir, after a few quick instructions by Shekar, how he managed to make 2000 Rupees in just one day, last Sunday. A smirk on his face was a living testimony of SST’s honest work in Padavedu.

SST works as facilitators, not financiers. If there is a toilet requirement in a school, for example, they facilitate the process by working together with existing donors.

In most sectors, they support and empower people with information about various government schemes available and encourage them to use it. 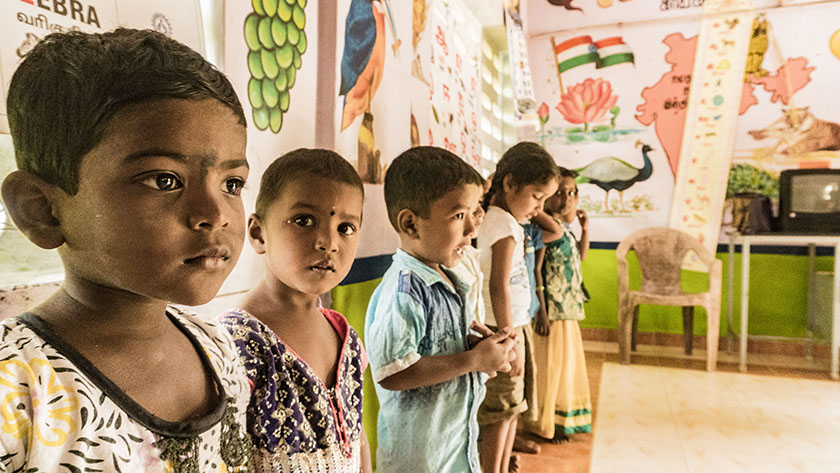 The local Balvadi of Keshavapuram, that now entertains a 100% enrollment of local kids and help them make a better tomorrow, was founded by SST. They provided the infrastructure — right from the foundation of the classrooms to toilets to all the teaching material — and then handed it over to the government.

Nearly 4L Rupees has been invested in each school in Padavedu. 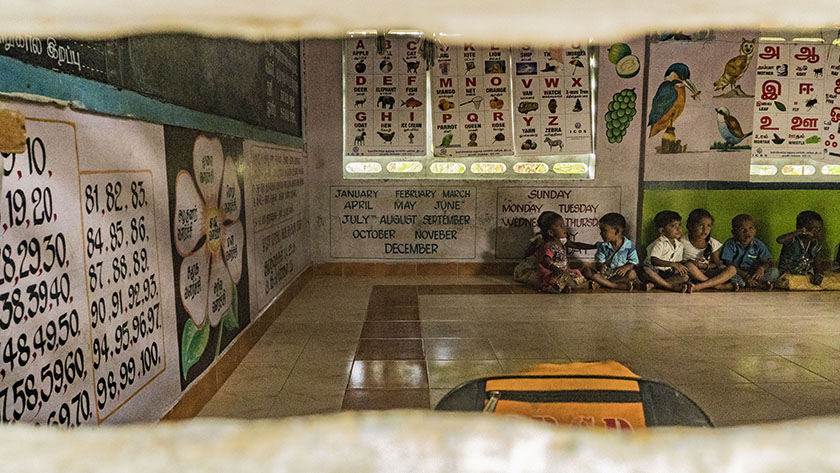 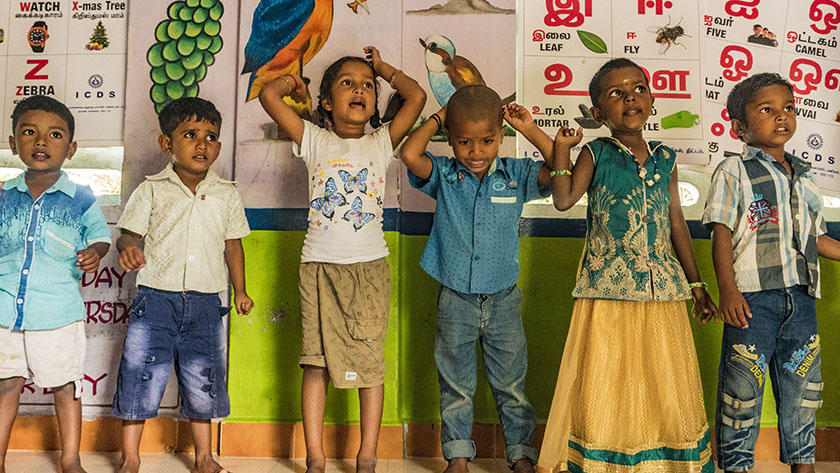 We were told about different activities and lessons that kids up to the age of 5-year old hone here before they get ready for the first standard. While their parents are away working, these Balvadis help kids learn a bit more about the discipline and get their first few lessons for a civilized world.

A small village in Padavedu, Cheena Puttur is popular for a very unusual craft — of weaving baskets and small boxes out of banana leaf fibre. SST has formed several self-help groups for women who were trained in art as an additional source of income. SST provides them with metal frames and other hardware, before helping them get bulk orders.

Without getting much into the mechanical gibberish, I asked how it helps individual ladies in having an additional source of income out of this, and everyone had a success story to share. 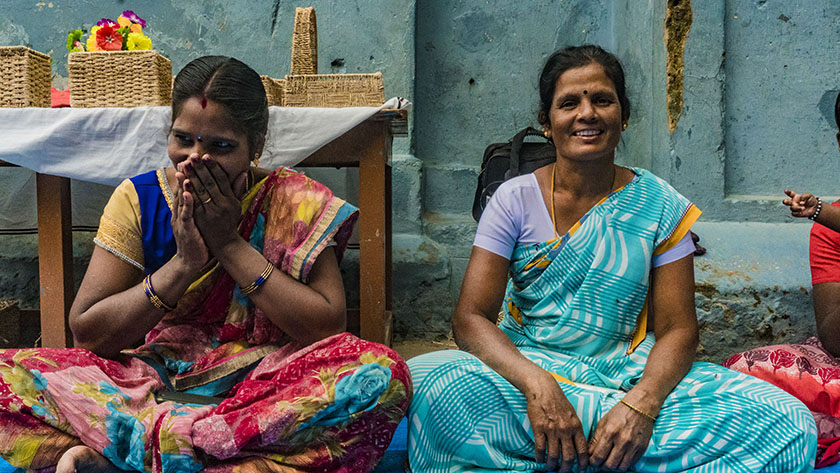 Chitra and Devi, who belonged to a self-help group in Padavedu called Sri Ganpati, with 16 other group members, shared how this activity has personally helped them save money for their young kids. Three years ago, their self-help group took 4L Rupees as credit from the bank as an initial investment.

Three years later, and after complete repayment of the loan, they all have started saving money in their group’s shared bank account. Life cannot be better than this, they shared, with a smile. 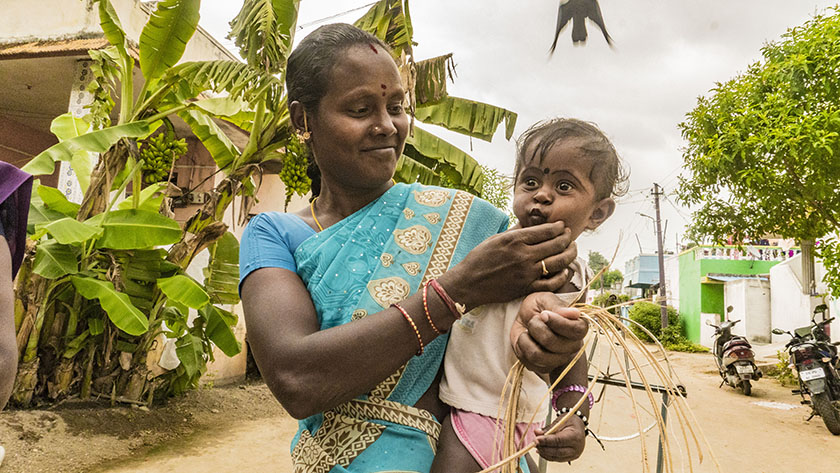 Prema, another woman belonging to a self-help group called Power Manni (meaning Full Moon in English) shared how in 2010 they started their self-help group in Padavedu with 16 members, taking 7L in credit as the initial investment.

By 2016, they repaid all the loans, with each member in their self-help group now having a personal saving of 30,000 Rupees. Each member of her group also has another primary source of income like tailoring or farming, among others. 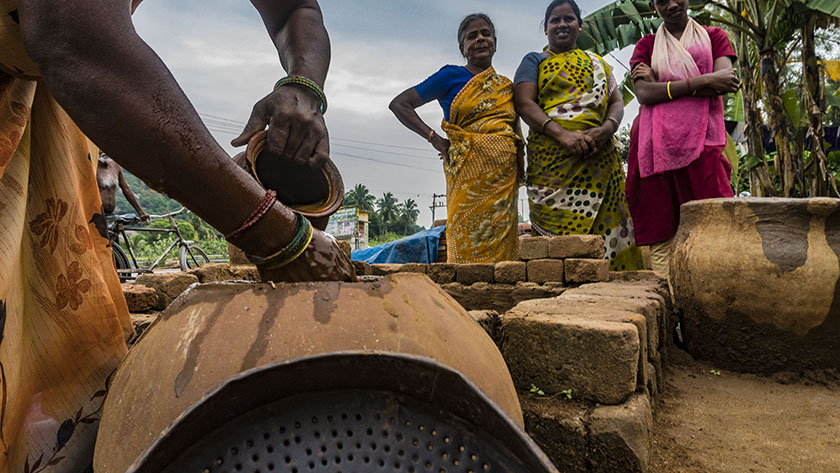 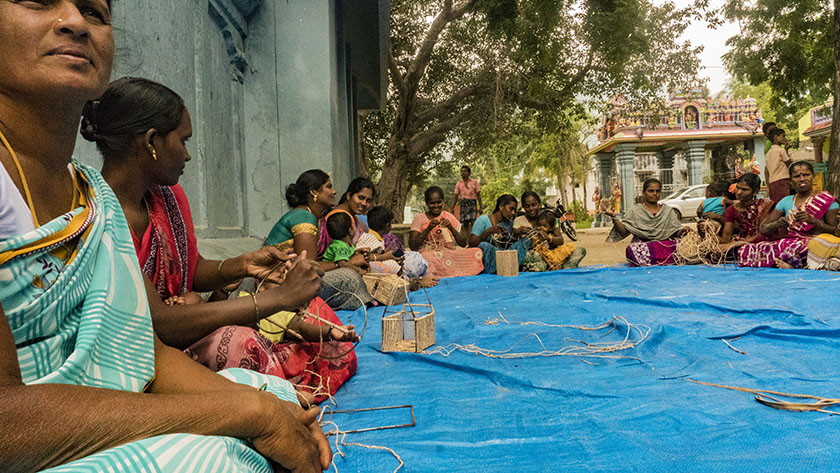 Founded in 1996, SST works around 6 key focus areas — economic, education, environment, health, infrastructure and social while keeping the community as a focus.

Once done with its background research, SST adopts an entire village and introduces several life-altering initiatives, while keeping a check on the ongoing government macro initiatives like ‘Make in India’, ‘Digital India’, and ‘Swachh Bharat Abhiyan’.

For example, other than all the economic development programs, that SST, in Padavedu, was responsible for, it also had a keen focus on segregation of degradable and non-degradable waste, and in the process, collects over a 100 tons of vermicompost every month.

Money generated from the sale of vermicompost (over 4 Lac Rupees every month) is then used for the development of the villages. 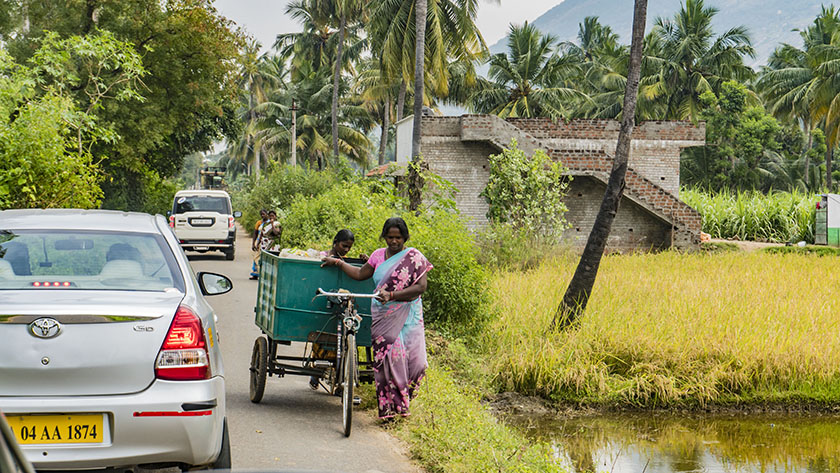 This is just one of the thousands of other similar cases, across five states in India, where SST is active and has developed a model that works well with the villages. I am sure if SST keeps working at a pace they’re maintaining right now, their working model will act as a wake-up call for the nation.

Disclaimer: I visited Padavedu on a blog-trip with Srinivasan Services Trust (or SST). Though my trip was sponsored by them all experience and viewpoints are solely personal. I only recommend what I personally experience, and find worth appreciating.