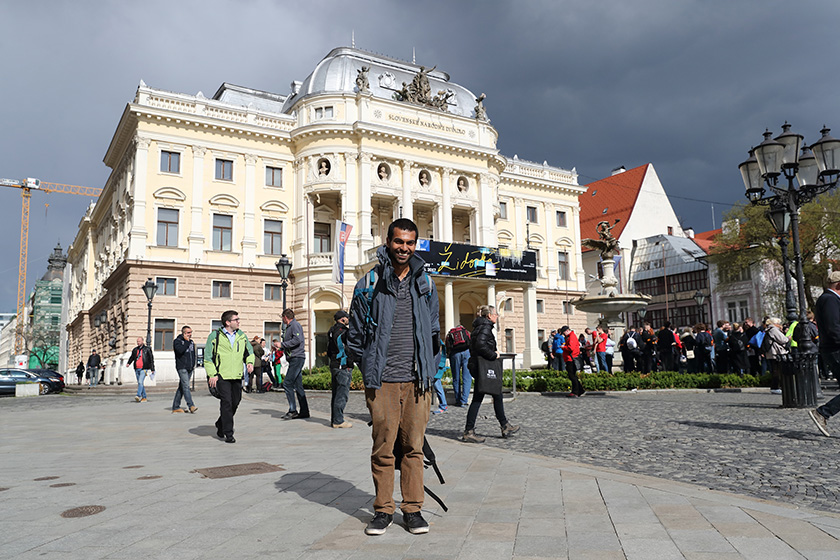 Before you read this story about the robbery in Bratislava, I request you to please read the entire story — from how I got robbed in Bratislava and what followed next. Please do not leave the blog in between and find a negative tone against Slovaks, or Central Europe at large… because that was never the intention, and just cannot be!

While planning my 2-month backpacking trip across 8 countries in Europe, and before I arrived in Bratislava, the capital town of the east-European country of Slovakia, a few people warned me about having my wits about the place. “You better be careful walking on those streets; eastern Europe can be surprising,” they claimed.

But I never cared much for their advice. I mean for a person who had spent most of his life learning the art of self-defence, inside the crazy boundaries of New Delhi, central or eastern Europe should be no problem, right?

“I’ve seen worse,” I would carefully assure myself. To sometimes even brag about it, and sound more experienced, I would utter an experience or two from my solo backpacking trip in Southeast Asia or South Asia, and how they only turned out to be a place — at least for me — where I could feel just as relieved, and assuring, as I should be, in Australia or any other part of the world.

Bratislava As A Town

Despite its favorable geographic location, and the fact that it’s the capital city of Slovakia, Bratislava turned out to be like any other capital city I’ve seen in my life. It was quiet, peaceful, and amazingly romantic, with a surprisingly laid-back vibe (at least during the Easter holiday when I was there).

The last time I remember I totally adored a capital city for having such a peaceful life, I was some 8 thousand kilometers away, searching happiness in the capital town of Thimpu.

So yea, Bratislava was alluring. And that’s how it felt, at least the first three nights, as I arrived in the town for a blogging assignment hosted by Bratislava Tourism Board.

I got to stay at one of the nicest hotels I’ve ever stayed in my life (Mercure Bratislava Centrum Hotel) with great activities lined up, and free travel around the city using the Bratislava Card. Things were going just as smooth and as enjoyable as they should be. And then the night of 17th April happened!

Getting Robbed In Bratislava

It all happened on the night of April the 17th, as I was on the way to my hotel, after capturing the dramatic nightlights of the city, from the top of Bratislava Castle, something that made the city look even more beautiful than I expected — as I met three people claiming to be Slovaks in a city tram (two guys and a girl).

A friendly conversation among us and their fond interest to know more about India, as soon as I told them I am from India (despite none of them being able to understand/speak fluent English) built a sudden assurance that they’re like those friendly people who would want to know more about other cultures. Hence, we spoke!

As I reached the last station, and I got off at the train station at Bratislava hlavná stanica to walk back to my hotel, they asked if I would be interested to have a drink at one of the bars in the station. The station was full of people, and so was the bar they picked. There should be no problem at such a public place, but I did not know what was coming. I did not know that one of them will flee with my camera, as the other two try to engage me in a conversation. And that’s how I got robbed in Bratislava at the train station.

Now as I try to stop the other two, and request a few dozen people at the station to “call the police” no one came forward and tried to ask for what the matter was. I am sure if none of them even understood English, they, at least, understood the word “Police” and a shocking look on my face must have been only explaining the matter a little more.

Seeing me going crazy, all of a sudden the guy and the girl try to be threatening now, and making it to a run, but not before my Indian instincts kicked in, and I quickly captured their faces in my mobile phone to have a proof of who did this to me. 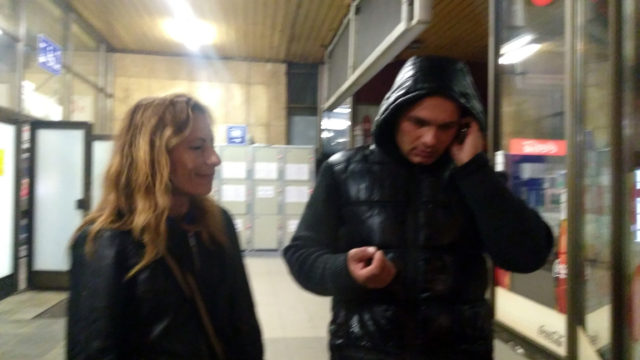 Two of the three people I, fortunately, got a picture of, on my mobile phone

I think they were either too new at doing a robbery in Bratislava, or high on drugs, as they did not realize what these pictures can do to them. What if I go to the police and file a complaint against them, and release their photos at many places as I can. 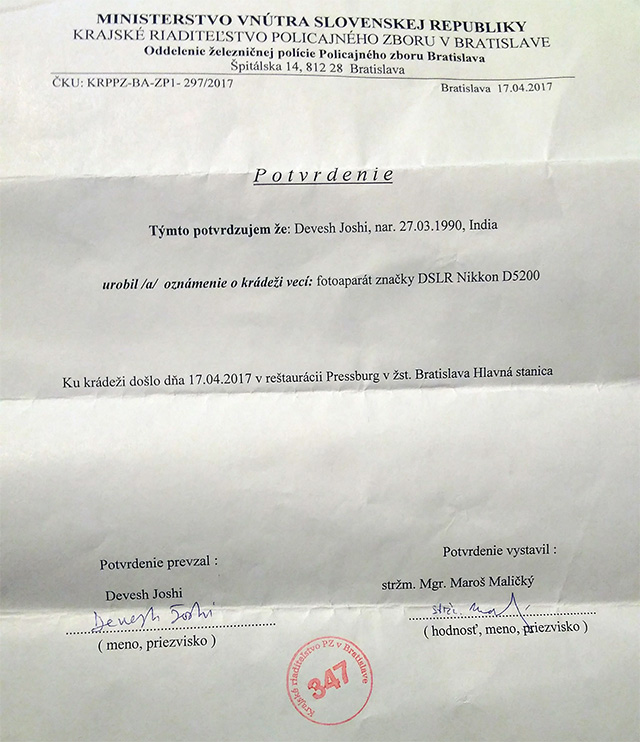 [PS: Other than filing the complaint, I also contacted a couple of news Slovakian news publications who have published the news. You can read the two news articles by clicking here or here]

Say No To Generalizations

As I posted about the incident on my Facebook Page, the next morning, some people felt sorry for me, while others asked me to be more careful in the future. One or two comments even ended up making generalizations about Slovakia. They would say that Central and Eastern Europe can be risky and compared them with the better (at least economically) part of Europe that lies in its West.

No, I do not want this happen, especially not when I keep hearing a similar story in my country India, every now and then, yet I know how amazing India can be. Every country has a few bad apples and basis on them we can’t generalize a country or societies at large! After all, these bad apples should not exist, right? At least not in our head.

Some time ago, after I started penning down this story, I happened to get a message on my Facebook Page, from someone from Slovakia, showing their greatest sympathies, asking me if I ever come back to the country, they have a place for me to stay, as they are eager to show me the better version of it. They even said they want to donate some money and help me buy a new camera.

I can already see which direction this entire thing is going to… towards a better world. And to make it happen, I hereby share my Paypal Account ID for those who want to donate some money and help me buy a new camera.

For now, I conclude, by mentioning this…

More on the story will follow, as I’ll explore more developments… 🙂

April 21: A couple of messages from people, and a couple more reasons to smile… 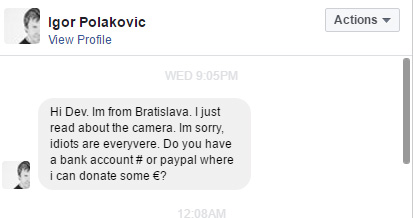 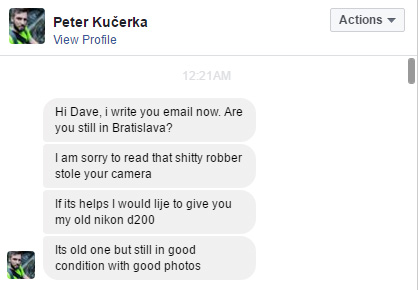 I never expected this entire incident will take a direction that it did. So far, I’ve covered almost half of the cost of the original camera with donations from people.

April 22: I am officially requesting people to not send more donations, as I’ve pretty much got the money I wanted to buy a similar camera, plus someone from Bratislava (a guy named Peter) has given me his Nikon D200 which I can use throughout the tour.

After this incident took place, I personally felt that Slovakian people have come out as a force, not wanting to have crime walking freely on their streets, and it was totally amazing to witness. Sure my robbing in Bratislava incident was a bad one, but how local Slovaks helped me has outweighed all the bad that has happened.

I appreciate how Slovakian media, even if it was a pretty insignificant incident, did not take the matter lightly, and did everything they could to help me (a tourist) feel as safer and assured in their country as he should in any other part of the world.

PS: I had a lot of places and blog about but couldn’t do anything because of this incident. The only tourist experience I had there was what I tried before this incident took place. You can read about it here: offbeat target shooting in Bratislava.