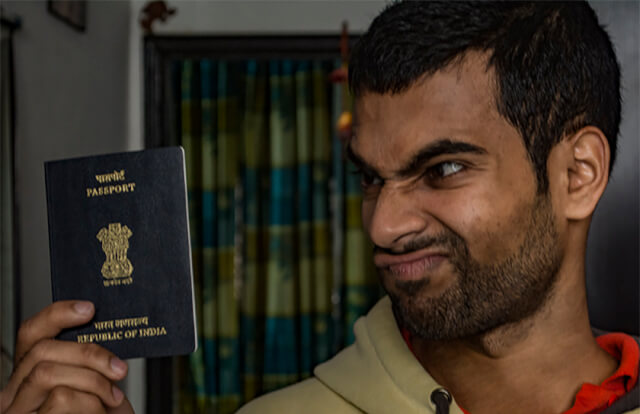 After living in the United Kingdom for a few years, travelling a bit of the world, if there’s one thing I’ve learned, it is: being an Indian is a proud thing. People around the world like Indians, respect Indians and are always eager to know more about Indians.

While I was on a road trip in Germany last year, there were so many instances which made it so much easier for me to connect with others – locals and travellers alike – as I told them I’m from India. Bollywood and Yoga made my identity even more interesting.

But feeling cool and wanted is one thing, and feeling empowered is the other. Sure my identity, as an Indian traveler makes me feel good, perhaps even respectful, but it does not make me feel empowered – not as long as I hold a Navy Blue coloured passport saying ‘The Republic of India’.

There’s no denying the fact that the Indian passport is weak – given our country is considered one of the leading economic powers in the world. From Chinese to Americans to Russians, everyone considers India an important state to trade with, but when it comes to welcoming its members they all take a step back.

I won’t blame them for this antagonistic behaviour though, our former government’s sloppiness towards foreign relations has, in fact, much to do with it. But let’s not get into politics, rather start debating about our helplessness.

Before I say anything further, and we discuss why is Indian passport so weak, let’s take a look at the following two maps… the grey part represents the part of the world (or the countries) that I, being an Indian passport holder, cannot access without applying for a VISA in the respective state’s embassy (and even most of the other colourful countries, as shown in the map, only offer a disappointing VISA-on-arrival, with a travel time of fewer than 15 days):

Now let’s compare it with someone who holds a passport for Great Britain (consider the top 50 strong passport-holding nations having almost a similar picture):

Note: This article was written in 2017. The stats might have changed!

And in case you thought I compared India with strong nations like the UK, let me tell you that most of the ranking systems consider the Indian passport among the few least powerful passports in the world, and we rank below countries like Kazakhstan, Namibia, Kenya, Uganda, and even Cambodia and Bhutan – now that’s a real shame!

Update 2020: According to the Global Passport Power Rank 2020 Report, the positions have changed a lot. UAE has the most powerful passport in the world now. India gets a revised rank of 70. We can now travel to 26 countries without a visa and 44 countries on a visa on arrival. Though the position has improved a little, I still ask the same question: why is the Indian passport so weak?

Anyway, my point here is not to make any false generalizations or make you look down upon our national identity as Indians. All I’m saying is that our weak passport curbs us from travelling and makes our life tougher as global citizens.

Last year, while I was backpacking across Southeast Asia, I ended up paying a few thousand Rupees extra because of my passport. How? I wanted to travel from Thailand to Cambodia using land transport, but only to make sure that my VISA on Arrival doesn’t get rejected, I’d booked an exit flight (from Thailand to Cambodia). Where road transport would have cost me about 1,200 Rupees, the flight cost 5,500. A loss of more than 4,000 Rupees for no reason.

I moreover wanted to visit Malaysia, from Thailand, but that again would have cost an extra flight because, despite an open border, Indians are NOT ALLOWED to enter Malaysia by land. Most Europeans and other strong passport holders can, however, do so.

And that’s why it’s so tough to spot an Indian face lugging a heavy rucksack, jumping from one country to another. Such a lifestyle isn’t possible for us.

I mean even if you look at the many Indian travel bloggers today, you won’t find a single freestyle backpacker blogger who writes about travelling indefinitely from one country to the other. Why? Because they can’t! If they need a VISA, anywhere other than developing Asian countries like Vietnam or Cambodia, they’re required to show a complete end-to-end itinerary, and that’s a lot of paperwork. Even countries like Thailand, Singapore, and Malaysia, which offer a VISA ON ARRIVAL for Indians, ask for an itinerary, and pre-booking of all our hotels and transportation before allowing us entry – meaning, the entire definition of freestyle backpacking is already lost somewhere in oblivion.

I was recently in the process of applying for a Schengen VISA and it turned out that other than a return flight, and pre-booked accommodation, I was required to provide proof(s) of transportation inside Europe. The only thing I could do was eat and shit where I wanted, everything else had to have a reason.

I was supposed to provide bank statements, letters of recommendation and introduction, return flight tickets, hotel bookings, proof of employment and even tax records. I had to make every possible move (even use some creativity) to convince the visa officer, beyond all reasonable doubts, that I’m planning on going home at the end of my stay and not illegally staying back.

As a freelance writer, my income is not regular, I don’t have a place of work, and I don’t even have a two-week holiday block. And because my income was not taxable last year, I clearly don’t have a safety net now. Now that I’ve applied for the VISA, I have a certain amount of fear all the time, until I get my passport back – either accepted or rejected!

But, I also wish to see the world. My heart also desires to explore more countries, just as much as a German or a Korean. But alas!, my Indian passport is weak, and I’ll have to take it with me as a lifelong curse!

Are you an Indian passport holder too? Let’s share our experiences in the comments below! And hey, don’t feel sad, if you cannot travel abroad, check out these cool holiday destinations in India.