But ever since they introduced it, travellers seem to be in dire straits. From how much it costs to where to obtain it from, people have all kind of questions.

In this blog, I will be discussing all details you need to know to obtain Rohtang Pass Permit for tourist cars or bikes. If you have a question regarding this thing, you will find its answer here.

Choose a topic of interest from the table of contents below, or read the entire blog for complete information…

Before 2011, anyone could access RohtangLa without having a need to obtain a special pass. There was no funnel on the number of vehicles accessing the route.

And the increasing number of vehicles was not only clogging traffic on the top but also disturbing the ecosystem around.

Worried about heavy pollution caused by vehicles heading to Rohtang Pass, the NGT, or the National Green Tribunal, put a funnel on the number of vehicles in 2011, to control day-trippers from Manali. There have been several reports on the internet how NGT keeps a firm check on pollution levels at Rohtang Pass.

So in 2011, the local authorities decided to introduce a permit for vehicles crossing Rohtang Pass Permit. 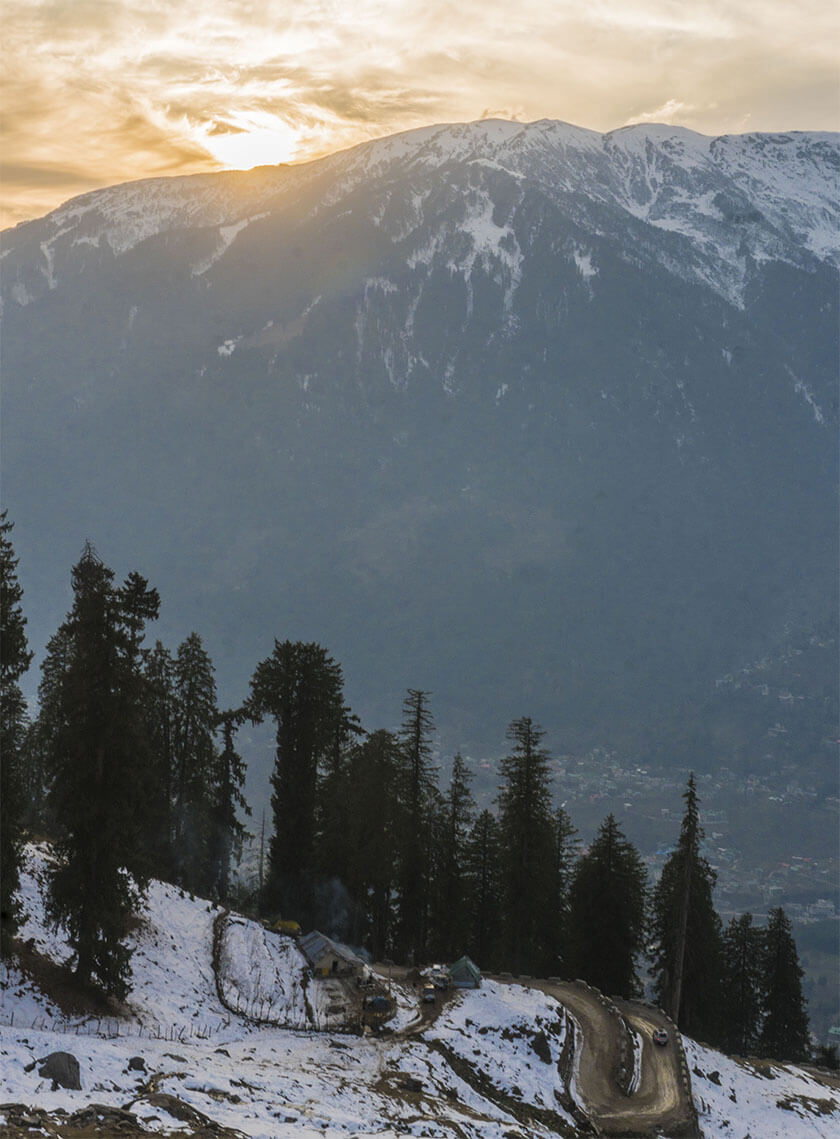 A Constant Change In Rules

As per August 2020, a total of only 1200 vehicles are allowed to obtain a pass every day. But it doesn’t mean 1200 vehicles a day is a constant number.

In the beginning, there was no funnel on the number of vehicles that can get a pass. Later, the number was limited to 2000 vehicles a day.

In 2020, the number is set to 1200. The permit is issued as per the daily quota of 400 Diesel vehicles and 800 Petrol vehicles. This quota includes state transport buses, private cars, and taxis.

The fee for the pass (that remains at 500 Rupees for Cars on top of an additional 50 Rupees congestion fee in August 2020) keeps increasing and decreasing too.

Where both – vehicles doing a day trip from Manali to Rohtang La, and vehicles that are doing onward journey to Leh/Ladakh/Lahaul/Spiti Valley – need a permit, there are two different types of Rohtang Pass permits.

For vehicles only passing through Rohtang La (and going further to Leh or other places) the 1200 vehicles a day limit does not apply. Though they still need to obtain a Pass, they are going to get it no matter what.

The limit only applies to the vehicles doing a day trip to Rohtang La and thus need a parking space there.

As per August 2020, for everyone taking their vehicle (private or commercial and whether a car or a bike) from Manali towards Leh, Rohtang Pass Permit is mandatory.

Vehicles coming from Leh (or some other place in that direction) towards Manali, however, don’t need a pass at all.

Also, if you’re travelling on a bus or a taxi, you don’t need it.

The permit is only needed for vehicles, and not people. Having said that, if 5 people are travelling in a car, only one permit needs to be issued, and that too for the car only. That will work for the entire group.

Again, the Rohtang Pass permit is mandatory for both cars and motorcycles. Anything that has a motor attached to it needs one. If you’re riding a bicycle, for example, there is no need to get a permit.

Even Himachal registered vehicles are required to obtain Rohtang permit. For example, if you were a resident of Manali and your car has a number belonging to Kullu District or some other place like Shimla, you will still have to get the permit. This applies to both private and commercial vehicles.

And as I said above, for vehicles going to Leh or other places, there is no limit on the maximum number of passes granted in a day. The 1200 vehicles a day limit (as per August 2020) only applies to vehicles doing a day trip to Rohtang La and need a parking space there.

Where Is The Checkpost For Rohtang Pass Permit?

At nearly 15km from Manali at a place called Gulaba, you will come across Traffic Police checkpoint where you will be stopped and asked for your Rohtang Pass permit. From Gulaba, RohtangLa is another 30km.

Consider the checkpoint a little closer towards Manali but almost halfway between Manali and Rohtang Pass.

Having said that, if you do not have the pass you cannot get to the top. Neither you can go towards Leh.

Again, if you’re coming from the other direction (ie Leh or Keylong to Manali) you won’t be asked for the permit at the checkpoint.

I remember during the Delhi to Manali road trip with my family, last year, when I told my parents that we need a special permit for our car to actually go to Rohtang top, my father asked if we need to visit a travel agent in Manali to do so. And that’s the kind of ambiguity we have when it comes to the permit for Rohtang Pass.

Honestly speaking, if you know how to access the computer and you have an internet connection, you can obtain the permission in less than 10 minutes. Similarly, if you have a little bandwidth left and can download a mobile app, you can get it in less than 5 minutes.

Those who stay outside the possibilities of the World Wide Web, can, however, visit the local SDM office located on Mall Road in Manali.

There are three ways to apply for it…

In a week (Tuesday to Monday) only 3 permits can be obtained for each vehicle.

No Vehicles are allowed on TUESDAY as the day is marked for maintenance of Rohtang Pass.

Let’s discuss them one by one…

It is possible to apply for the permit required to travel to Rohtang for tourism purposes as well as for travelling from Manali to Leh Ladakh or Lahaul Valley or Spiti Valley online.

Open the website https://rohtangpermits.nic.in, scroll down and choose the right option. Fill in the details of your vehicles including and get a print out of the receipt.

Make sure you enter the correct details. One tiny error (say, in the registration number of your car or in spelling out your name as mentioned in your ID proof) and your permit won’t be valid.

The same website can be used to apply for the Green Tax (the one you will stumble upon about 10km before entering Manali) if you are travelling from Delhi to Manali.

By Using The Mobile App

The Rohtang Pass Permit mobile app is available on both Android Play Store as well as the iOS App Store by the name of Rohtang Permit.

Download the app, fill all details, and voila. If you have a mobile app, you can apply for the permit and need not worry about carrying the printed copy of the permit as you can check the validity of your permit on the app itself by entering the permit number.

Since there is a bar of 1200 vehicles a day, it is possible to check the number of passes left for the day on the app.

The Rohtang Pass permit mobile app is easy to use, though minor bugs can lead to the app crashing.

Only three permits can be obtained in a week using the mobile app.

Once the permit is issued, it cannot be cancelled. Hence, be careful while applying for it with correct dates and other vehicle details, so that you do not waste the permit for anyone else.

If you are not very internal and technology savvy, it is possible to apply for the permit by visiting the local SDM office or the tourist information centre in Manali.

Both of them offer permit services throughout the week.

If you will ask me, however, the best will be to apply for the permit online or using a mobile app. You can also visit any internet cafe or travel agents in Manali who will do it for you for a minimal fee.

The fee for bikes and cars if you’re visiting Rohtang Pass: 550 Rupees. This includes the 500 Rupees permit fee and 50 Rupees congestion charges.

If you’re travelling beyond Rohtang Pass: Only 50 Rupees as the congestion charges.

Does that mean you can obtain the onward journey pass, visit Rohtang Pass and return? No!

There are two checkpints on either side of Rohtang La: Gulaba and Koksar. Here’s how it looks on Map: Manali-Gulaba-Rohtang La-Koksar.

When you show your Rohtang Pass permit at Gulaba an electronic entry (on your vehicle) is being done against your vehicle. It tells the checkpoint in Koksar if you have a Beyond Rohtang La permit.

On this permit, if you do not reach Koksar and return to Gulaba (from Rohtang La) you will be stopped at Gulaba for a fine because your Pass was for an onward journey. This prevents the misuse of permits. Data between the two checkpoints is in sync to catch the misuse of the permits.

And now, here’s a video from my Youtube channel, crossing the Rohtang La: