During the past few months, and particularly after writing a few blogposts about my motorbiking trip in Spiti Valley last year, if there was one question I was repeatedly being questioned, it was “how commercialized Spiti Valley is.” And innocently, I always only answered, “not at all”. I mean if you compare the Buddha Circuit in Spiti Valley, that, in reality, takes you to some of the most untapped and isolated corners of Indian Himalayas, with the much commercialized and beaten Leh-Laddakh, what else would you anyway say.

Though in reality, Spiti Valley is still pretty untapped, and there are times when you are driving there for hours without spotting any trace of life — the fact is, with soaring popularity, Spiti Valley is getting crowded every day. But not so in parts I ended up exploring with Jammu & Kashmir Tourism, recently. 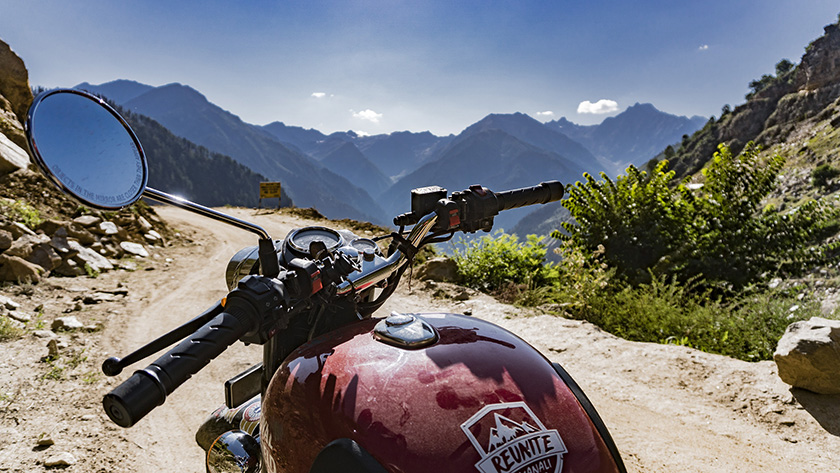 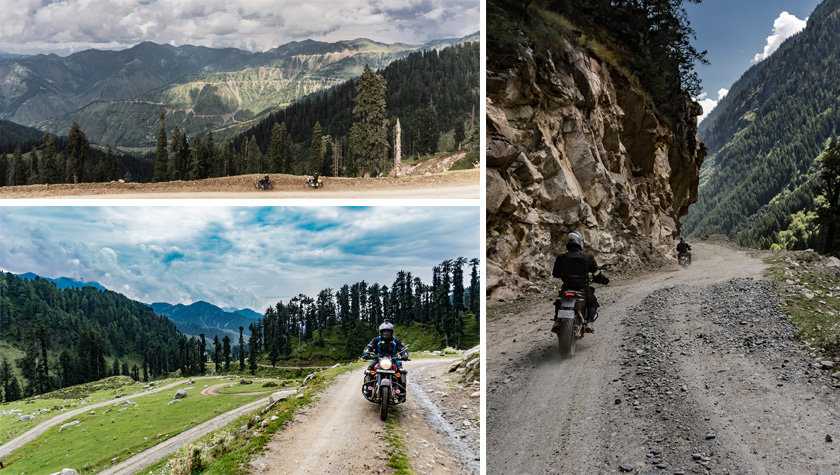 During my recent motorbiking tour with J&K tourism, with 60 plus riders from across the country, we explored places like no other. Our route-map took us to exactly what the expedition title promised, “exploration of unseen places,” as we slowly made our way, over a 7-day riding period, from Jammu to Killar, and back, bypassing some of the highlighted valleys and unspoken towns.

The Routemap We Followed 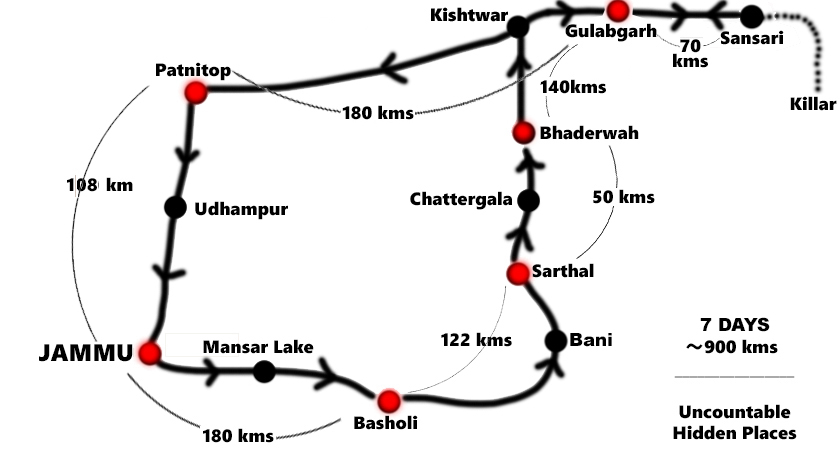 Completing a loop of 900 km, we rode for 7 days in a row, covering less than 150 km every day and keeping things more real and entertaining. Moreover, since we were a pretty big group (with 60+ motorbikes, two travellers, and a 4*4 drive) collecting all the riders, and riding together was a task. Those travelling individually, and those short on time and high on adrenaline, can cover up the entire itinerary in 3 or 4 days. However, I’d advise not to rush too much and enjoy the ride, slowly as it reveals.

What Made This Motorbiking Trail Offbeat 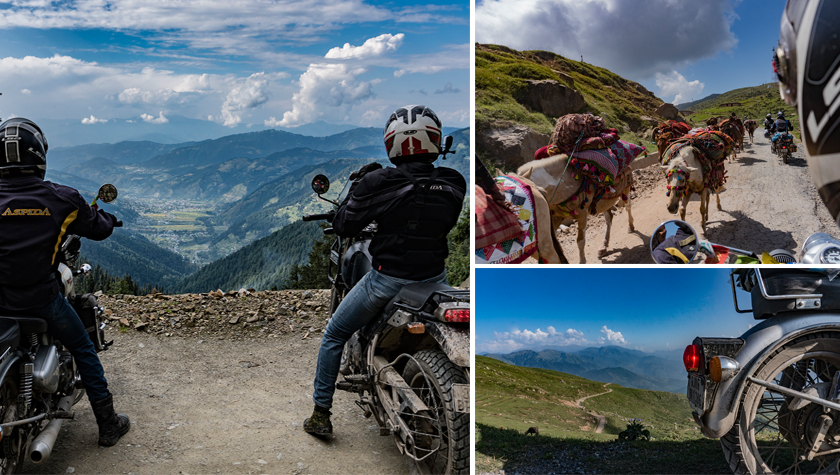 I won’t say that all the places we stayed at and all the routes we followed, were deserted. Patnitop, Basholi and even Gulabgarh (a popular pilgrim site) were pretty common among tourists of different taste, but towns like Bhaderwah and Sarthal made it up to us. Roads connecting both the towns, moreover the entire Basholi-Sarthal-Bhaderwah-Sansari-Patnitop route were absolutely unseen, particularly among the motorbiking community. 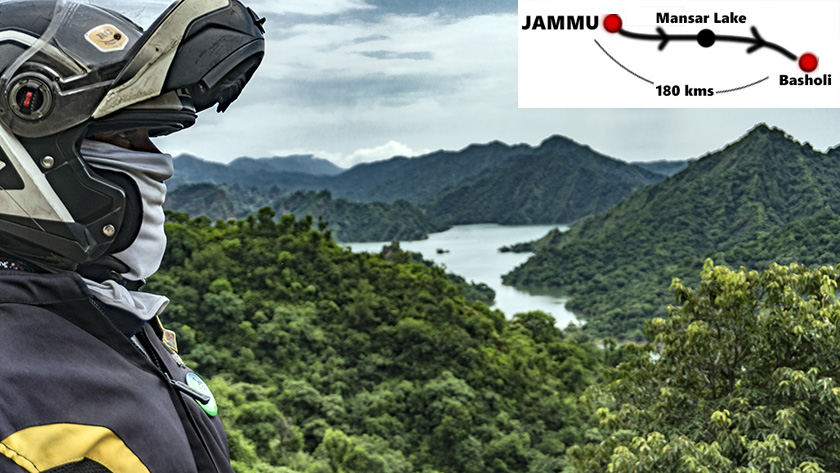 Except for a few bumpy patches as we neared Basholi, the entire route from Jammu (to Basholi) offered a sweet and comfortable ride. The journey took off with a steep climb, with unbearably charming views over the adjoining valleys and a beautiful railroad connecting Jammu to Katra. Though there are few alternative routes to reach Jammu to Basholi, we followed the one that took us to Mansar Lake in Buttal for it is one of the highlights in the region with its history belonging to the time of Mahabharata. A bit of quick nibbling near Mansar Lake and we hit the road again, for a better half of the day’s driving. 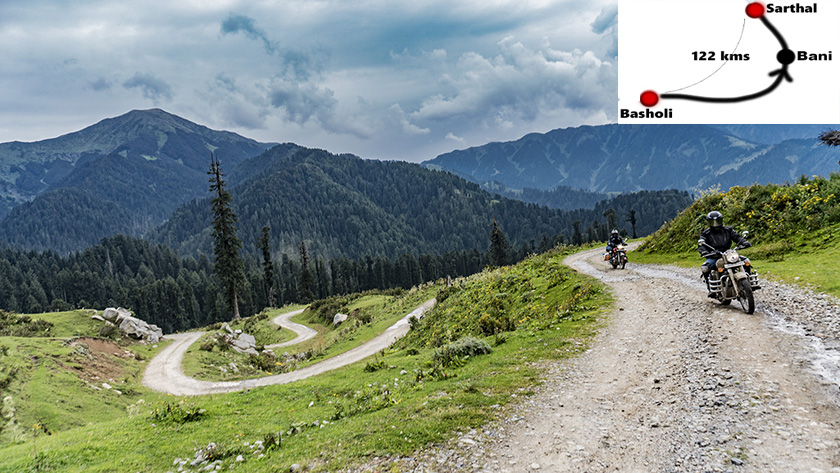 Granted a national highway status, the entire route from Basholi to Bhaderwah is scheduled for completion by the end of 2017. The road is metalled between Basholi and Bani (almost halfway to Sarthal from Basholi). After Bani, it starts to degrade and slowly disintegrates into a rough trail, but fret not, the surrounding views will keep you entertained. At the time of our ride, the road was quite plagued by landslides, and for that reason, we got stuck owing to a landslide at a few places, mainly because we had three four-wheel drives following us. But once you go higher the treeline, landslides sound like a mere farce. 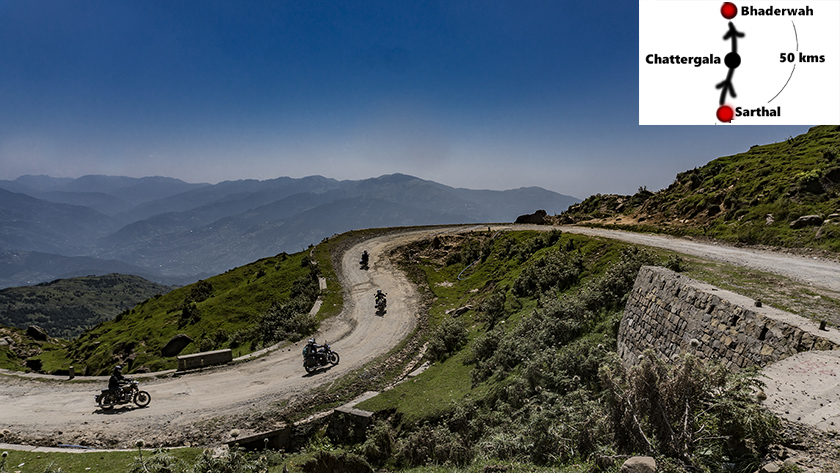 Sarthal to Bhaderwah, in reality, is only a 50 km stretch but takes at least 4 to 5 hours to cover because of tough driving conditions and high altitude variations. Moreover, the views are so gorgeous that you won’t help yourself stopping at a few places. Starting from 7,000 feet in Sarthal, you will climb to 10,000 feet above sea level near the Chattargala pass — the highest pass in this region (as a point of reference, Leh is at an altitude of 11,000 feet) — before coming down to 5,200 in Bhaderwah. The many hairpin bends and an open valley with visibility to a few kilometers in every direction make Sarthal to Bhaderwah one of the highlighted routes throughout the itinerary. So don’t pace too much on the route and slow down to soak in the beauty. 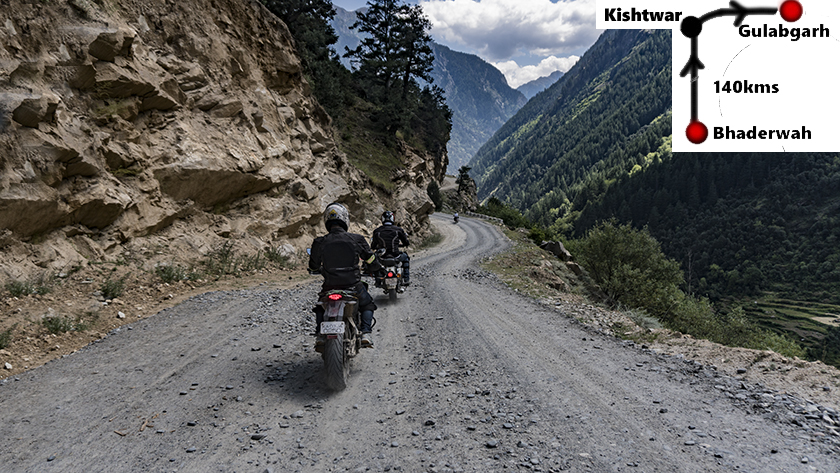 The route between Bhaderwah to Gulabgarh offers pretty much everything — smooth roads, gravel, big towns, open valleys, deep and suffocating gorges, you name it. Bypassing the town of Doda, you reach Kishtwar in nearly 2 to 3 hours, and that’s exactly when the ride becomes tougher and far memorable. With Chenab River flowing on your left, the Kishtwar-Keylong road takes you to roads much treacherous and beautiful. Here the valley suddenly becomes narrower and drier, offering dramatic gorges and a steep fall of at least 500 meters. Though less than 50 km, it still takes at least 2 or 3 hours to drive all the way from Kishtwar and Gulabgarh. 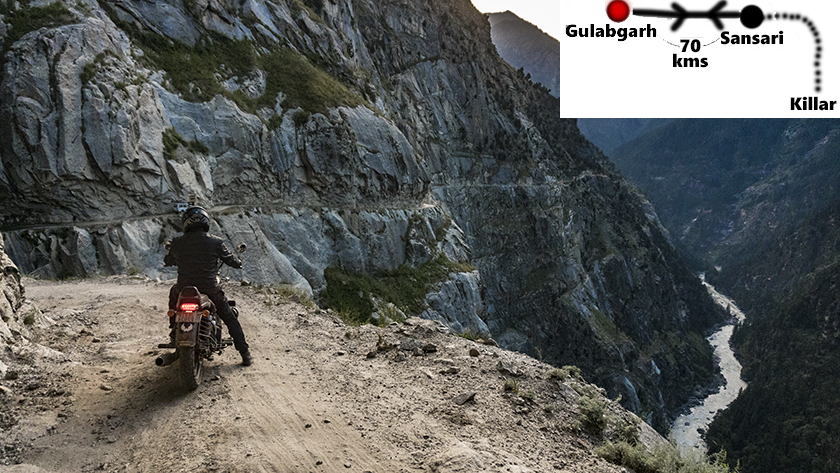 The highlight of the journey and the soul of the trip, the route from Gulabgarh to Killar was definitely the memorable part of our entire route-map. With unrealistic cliffhangers and deep gorges, the narrow & suffocating roads made up for their title of Indian Himalayas’ one of the deadliest roads. The unavailability of life and the significance of having-your-luck-by-your-side makes things even more challenging here, so be prepared for it. 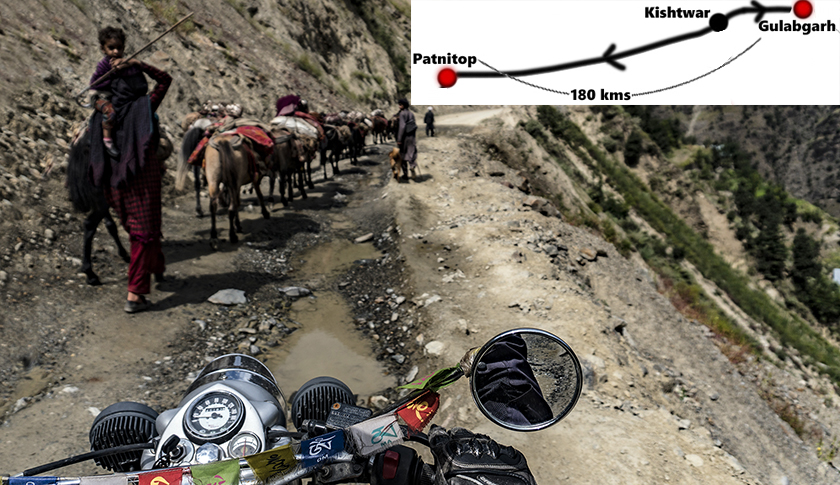 Before you leave Gulabgarh, as we did, drive 10 minutes to a hot spring location called ‘Tapta Paani’ to quickly rejuvenate and fine-tune your driving senses.  The highlight of the journey will be Gulabgarh to Kishtwar. From Kishtwar, the road will turn into how most other Himalayan roads appear — boring and easy. Even after an uncountable number of stops, we reached Kishtwar in less than 3 hours. Gulabgarh to Kishtwar took almost the same time. 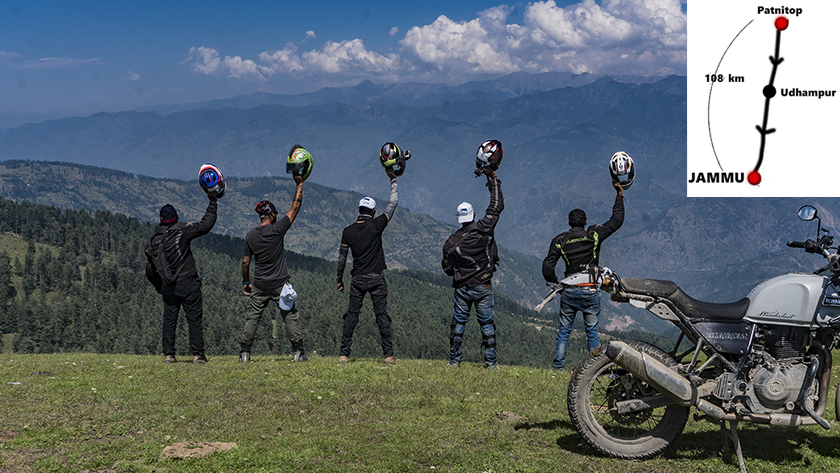 Patnitop is popular for quick and easy escapes from Jammu and as a tourist destination offering a cool sub-zero temperature (almost) throughout the year. At 15km — a one-hour steep climb — lies the highest point of Natha Top. The road to Natha Top is a treat to eyes and the location, even more beautiful. With panoramic views of the Pir Panjal Mountains, as you look down, Natha Top stays in your mind and memory forever. A quick trip to Natha Top, from Patnitop, can be completed in under 2.5 hours. Between Patnitop to Jammu, a couple of attractions are Sansar Lake and the Chenani-Nashri Tunnel (India’s longest road tunnel traversing a distance of 9.2 km). 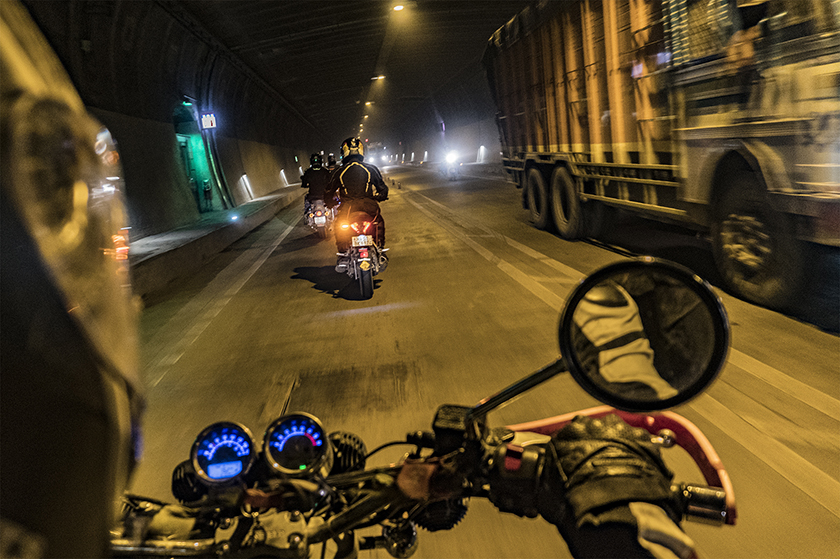 Disclaimer: This trip was organized by J&K Tourism and Biker Brotherhood Motorcycle Club, Jammu. But all recommendations and endorsements are solely personal. I only recommend what I personally try, and find worth appreciating.