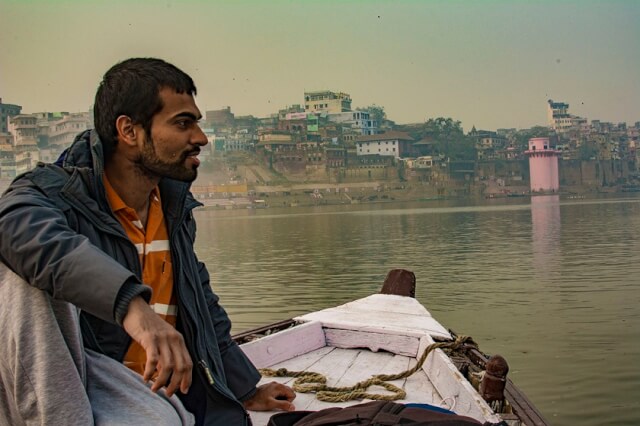 Before I start my Varanasi travel guide. I want to impart knowledge of some facts, state and affairs.

Varanasi can feel wild, particularly to those who are new to Indian culture. Watching dead bodies lit on fire, and naked sadhus whitewashed in ash, can scare you to a degree that you would not want to leave your hotel room. Despite everything, Varanasi remains one of the top holiday destinations in India.

So before you come here, watch some Google photos and see if you really want to come here in the first place. You may also be interested in reading these Varanasi travel tips for more useful tips.

Now, let’s get started with this Varanasi travel guide and what to expect here…

I remember attesting it to the autorickshaw driver — as soon as I arrived in Varanasi — that I’m finding the town similar to Haridwar, or Rishikesh without mountains”. I asked him if he has ever visited Uttarakhand. He rejected, it in the most uninteresting manner.

But as time passed, and I thoughtfully overstayed in the town, one day after the other, I realised that Varanasi was perhaps not anything like Haridwar, Rishikesh, or any other Indian town for that matter. After all, it is one of the world’s oldest continually inhabited places on earth – dwelling a civilization as old as 11th century BC. The town had to have its own appeal. 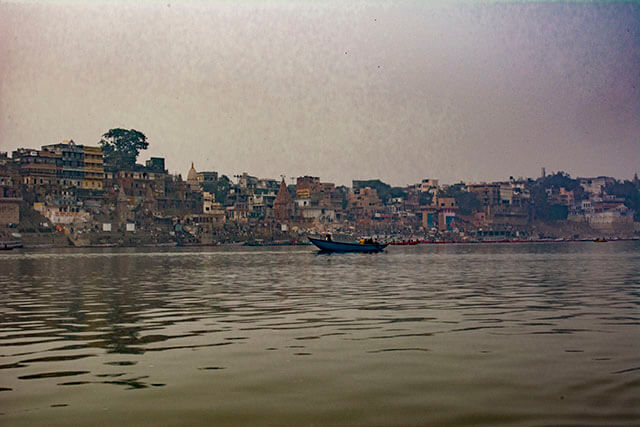 During my overnight train journey – from Delhi to Varanasi – I asked a group of students, from Benaras Hindu University, about where a tourist must stay to get the “real feel” of the town. They suggested the tucked away ghat of “Assi”.

Following what I was told, I decided to spend the first night at Assi Ghat which appeared to be a simplified version of ‘Spirituality and India’. Here Ganga was flowing almost flawlessly. A few oarsmen were busy persuading foreigners for a boat ride.

But as I explored a few more dozen ghats, the next morning, Assi felt like no more than a simple introduction to Varanasi – containing a set of subtle and restrained words. It held no charm for a writer planning to write a detailed travel guide on Varanasi. Manikarnika Ghat and Brahma Ghat were, perhaps, next level shows.

At Manikarnika, the many Aghoris could be spotted, alongside a much intense view of 10, or perhaps 15 adjacently burning pyres, making the sky all foggy and unclear. “Here even dead come to life,” said a local Brahmin I was speaking to as if innocently trying to add to the melodrama.

Well, travelling to Varanasi has its own charm, and it definitely wasn’t meant for the faint-hearted. 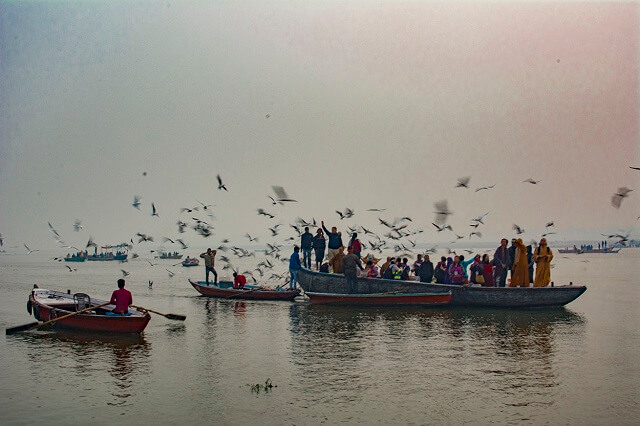 Varanasi Is A Dangerous Place

Don’t take me literally. The word ‘dangerous’ is written in the context of religious experiences you can get here.

Varanasi can be a chaotic and unapologetically indiscreet place – depicting some of the supernatural myths of Hindu culture. So brace yourself.

Most travellers, who find perfect harmony with nature and its laws, agree that Varanasi is a magical place, but those who don’t, couldn’t take the city for much longer.

Here the most intimate rituals of life and death take place in public, and the sights, sounds and smells in and around the ghats and the streets of Varanasi – can feel overwhelming. So persevere.

I remember watching at least 20 burning pyres at Manikarnika Ghat, and the sight was literally daunting.

Being closely connected to travel, I’ve come across tourism of all kinds: adventure, eco-friendly, cultural and even religious. But nothing as unusual and macabre as this.

Not a single day passes when dead bodies are not cremated at Manikarnika ghat in Varanasi. Manikarnika and Harishchandra ghats do at least 80 cremations every day, with the number reaching as much as 180 some days like on the weekends.

And to know that tourists come here to see the funeral pyres being set to fire in the open is more weird than fascinating.

How To Best Experience Varanasi

Early in the morning, I crossed the ghats, and the fires were still smouldering. The most clichéd picture of Varanasi suddenly came alive: a group of people surrounding the burning pyres on a ghat, circled by a few family members and sadhus, all whitewashed in ash.

Like any other historic town in India, the best way to experience Varanasi is by going slow. You try to fit in a few extra activities in your itinerary and you won’t be able to feel the town.

Having said that, stay away from those ’10 Best Tourist Attractions in Varanasi’ kinds of articles online. Don’t read every Varanasi travel guide you see online and rather explore the town on your own. 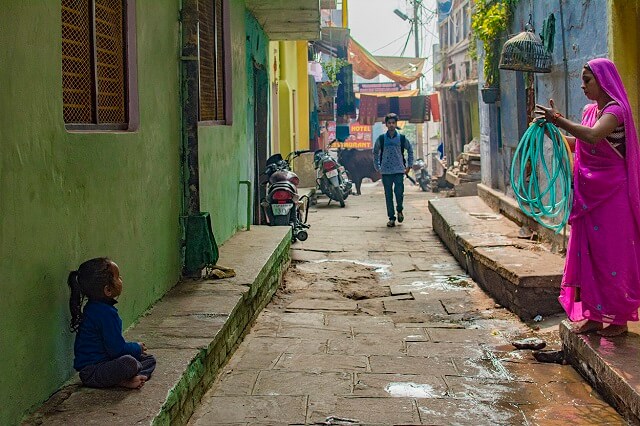 During my initial couple of days, I did the same thing. I raced around a few popular attractions, and honestly speaking it did me no favor. I would take a tuktuk, travel from one corner of the city to the other, only to come back and head in the other direction. I moreover hated the chaos. 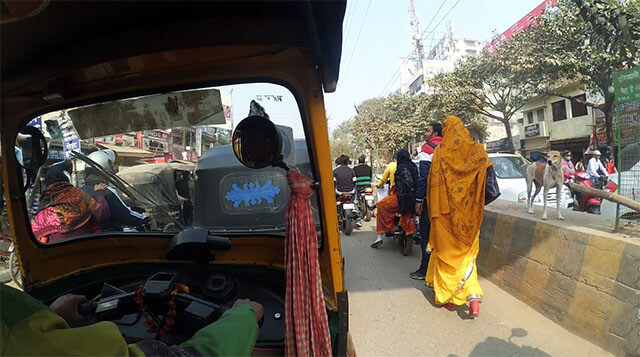 Once I finished the most sought after attractions (which included the popular BHU University campus and Kashi Vishwanath temple, among other places) I was left with nothing but to spend the time walking along the ghats and connected alleys. And that’s only when I actually felt the skin of Varanasi.

It is by going slow or not doing anything at all, that was how I best understood Varanasi. 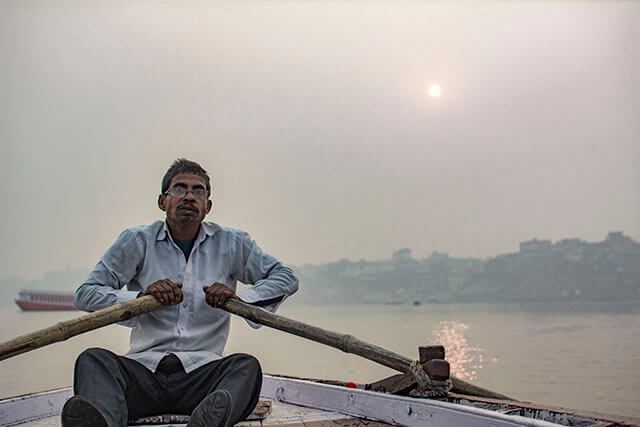 If you happen to visit Varanasi during October-November or March, do not miss to take part in two very prominent festivals of India: Diwali and Holi.

Where To Stay In Varanasi

There are two parts: the old town and the new town.

The best place to stay in Varanasi is the old city – situated along the western bank of the Ganges, from where it extends back to a labyrinth of alleys called galis.

I particularly loved my stay at one of the river view hotels at Meer Ghat – which was a few steps away from Dashashwamedh Ghat (where the evening Ganga aarti takes place).

You can rent a room between 300-800 Rupees, pretty much on any of the 80+ ghats in Varanasi. Their prices surge dramatically during peak tourist season, and the availability can moreover be a problem. 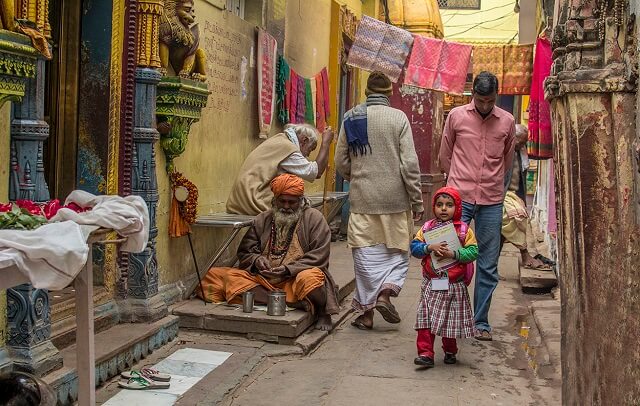 As I mentioned, the best way to explore Varanasi is by doing nothing, following no routine.

However, if I were to still speak about a few things to see in Varanasi and experiences to try, here are some

How To Travel Varanasi

Travelling to Varanasi is easy. You can take a bus, a flight or even a train to get here.

The nearest airport to Varanasi is Lal Bahadur Shastri Airport. It is located in a town called Babatpur, which is 26 km away.

Varanasi has excellent connectivity by road too. If you are coming from cities like Allahabad, Lucknow, Patna, Gorakhpur and Ranchi (someplace not more than 500km away) you can easily travel by bus. Well-maintained national highways, NH 2 and NH 28 lead to Varanasi from Lucknow, the journey taking around 6 to 7 hours.

Since Varanasi is a popular tourist destination there are many buses services. Just keep in mind that most buses might be running for Benares (to Banaras Hindu University).

From Banaras Hindu University you can take a tuk-tuk and reach Varanasi Ghats in about 20 minutes.

Another best way to travel to Varanasi from Delhi or some other big Indian town is on a train.

That’s all in this Varanasi travel guide. For more, you can write me a comment below.