[I visited Cambodia in 2016, and this is an edited version of the original story provided (by me) to be published by the print version of… Harmony India Magazine, May 2017 edition]

The mugshot of several dozen victims of the Khmer Rouge genocide lay in front of me. Some appeared to have a broken jawbone, and some, a few missing teeth. I winced every time I looked at a new face. The man next to me, however, stood still, though he appeared twitching from time to time. He looked Cambodian, and unlike me, I realised, he might just be finding the entire sight a lot more tormenting. A few faces might perhaps be familiar to him.

I’d arrived in Phnom Penh only a day before, and I was already inside the infamous site of S-21 Tuol Sleng Jail. The place had some appeal, after all, the S-21 of Phnom Penh is the reason why so many tourists come to Cambodia, in the first place.

After struggling with the thoughts and studying different faces for a few long minutes, as I grabbed myself again, I realised that the man standing next to me was also still there. He wouldn’t budge but only blink his forever-moist eyes. Looking at him I realised that I knew very little beyond the fact that S-21 was Khmer Rouge’s one of last strongholds, leaving thousands of people tortured, murdered and much more homeless and mentally bruised, during the four-year-long massacre that began in 1975. I knew nothing much about those four year massacre period either. As I ought to learn more, I went back to my hostel, took out a book that someone gave me in Siem Reap.

Children of Cambodia’s Killing Fields (1997) – as the title reads – is a sad yet powerful reminder of what happened to those who survived genocides as children.

In 1975, the Khmer Rouge, or the Communist Party of Kampuchea, as they officially called themselves, took over Phnom Penh and pretty much the rest of the country, with a simple goal to transform Cambodia into a cashless, anti-western, agrarian society. Anyone practising western standards of living – including doctors, teachers, and others wearing glasses (basically everyone who appeared educated) was brutally murdered. Schools were turned into re-education camps. Cities were vandalized. Many of these Khmer Rouge soldiers in Pol Pot’s army, were children, and many of their victims were children.

Inside my hostel dormitory, I scanned through the book really quickly and spoke about Khmer Rouge with a few locals. My hostel staff seemed reluctant to speak about it. The next morning, I decided to visit S21 Tuol Sleng once again, with a few hours planned for Choeung Ek Killing Fields as well.

At 7 in the morning, the city of Phnom Penh looked bright and functioning. Roadside stalls were already selling items, tuktuk drivers were busy negotiating with customers. It’s hard to believe that the riverside of Sisowath Quay, where today tourists can be found sipping their favourite cocktail, or a happy-hour 50c beer, was bombed 40 years ago. Most of the buildings in the city are quite new now, but the remnants of its old architecture and the many sad memories that local Cambodians are living with, even today, are quite visible. 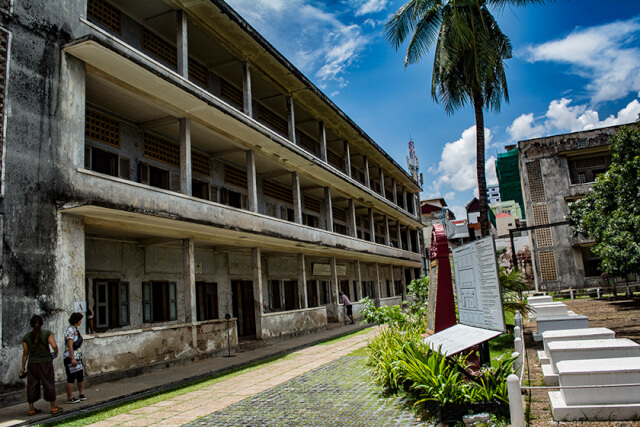 The two-storeyed buildings of Tuol Sleng used to be a high school and were turned into Khmer Rouge’s largest detention and interrogation center. It’s main building, notoriously known as Security Prison 21 or S-21, is where most of the heinous crimes took place. The buildings can be found covered in barbed wires and a few classrooms transformed into torture chambers – with each room housing more than a dozen small cells.

As you walk from room to room, you come across those that are torture chambers and others that are now displayed with torture equipment, or photographs of victims. A headset commentary continuously narrates a few first-hand accounts. 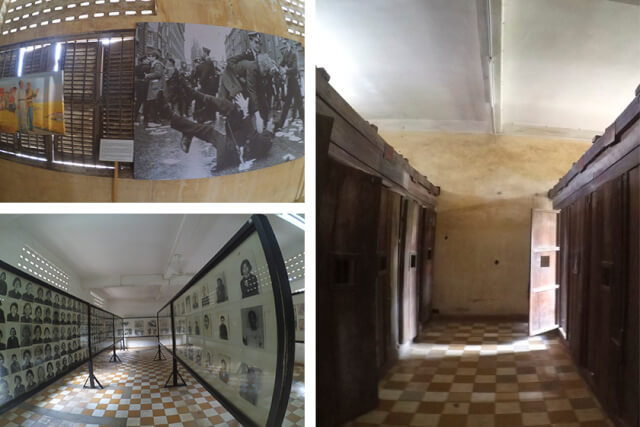 Inside the S-21 building of Tuol Sleng, as many as 17,000 men, women and children were imprisoned, tortured and brutally murdered, only fewer than 20 survived. I saw mugshots of people of all ages, some as young as five. Some look scared and some have traces of a smile. Not everyone who visits Tuol Sleng Museum could complete the entire tour, and I turned out to be one among them!

Devastated, as was the case, I decided to hire another tuktuk to the Killing Fields of Choeund Ek. As my tuktuk driver revved up, I inquired about my next destination. I was told that Choeund Ek Killing Fields was just one of 150 other such execution centres around the country – with each one of them screaming its own version of stories filled with blood and gory. Killing fields were used by Pol Pot’s army for massacres and burying dead bodies. Anyone who showed a slight hint of intellect, and their families, were killed and buried there.

Walking inside a killing field literally means walking on human remains. Sometimes you step on somebody’s shoulder bone, and sometimes, somebody’s skull. I was constantly being careful about not stepping on any white material that I suspected to be a bone. Listening to the audio set, which costs 3 dollars, on top of the entry fee, I learned that Pol Pot army even killed thousands by repeatedly hitting their faces, as bullets were expensive. Some smashed skulls only reappeared later attesting to the statement.

Killing Fields of Choeund Ek had several mass graves, separating the bodies of men, from that of women and children. Right next to a grave was the ‘killing tree’ with a massive trunk that was used to smash the heads of children before they were through into their designated mass grave. A tall 17-story stupa, situated almost in centre of the fields was also filled with no god, but only more human skulls.

It is hard to believe that everyone living in Cambodia, over the age of 40 is either a victim or a perpetrator of this brutality. And even those who were not born yet, are indirect victims of family separation and loss. Perhaps that’s why when you ask people about their views on Khmer Rouge, and any first-hand accounts, they either look perplexed or agitated (often perplexed though!).

Now looking back at my visit to Cambodia, and a few days of directionless wandering from North to South, I wonder how every Cambodian finds the courage to deal with what had happened in their families in past. I wonder what’s their story, and the story of that broken man whose face appeared unresponsive, but his eyes were continuously saying a thousand words. 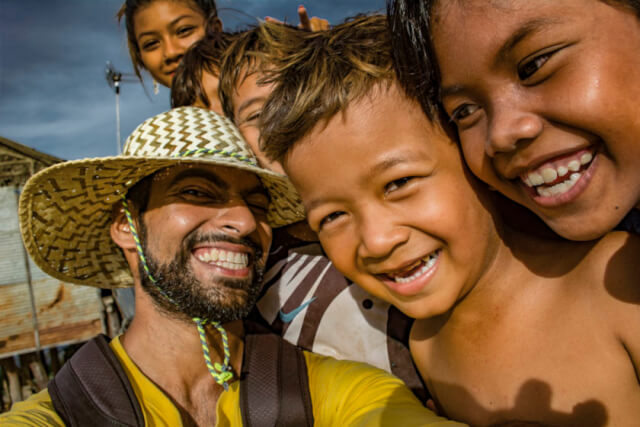 Though Cambodia may well be a country that is still trying to find its way after the horrifying genocide in the recent past, when you travel here you realise that it is filled with some of the friendliest people you’ve encountered in your life. As you walk along the streets in Phnom Penh, you find nothing but only smiles and laughs in the air. Its soul, its tragic past and its people never miss leaving a mark on your heart. Delicious food, beautiful coastlines, and lively nightlife, only add to the experience.

Cemented roads still don’t really exist here and you’ll be travelling along dirt tracks, yet every time you go past small villages, you will find children running out to wave and smile and shout a happy “hello!” 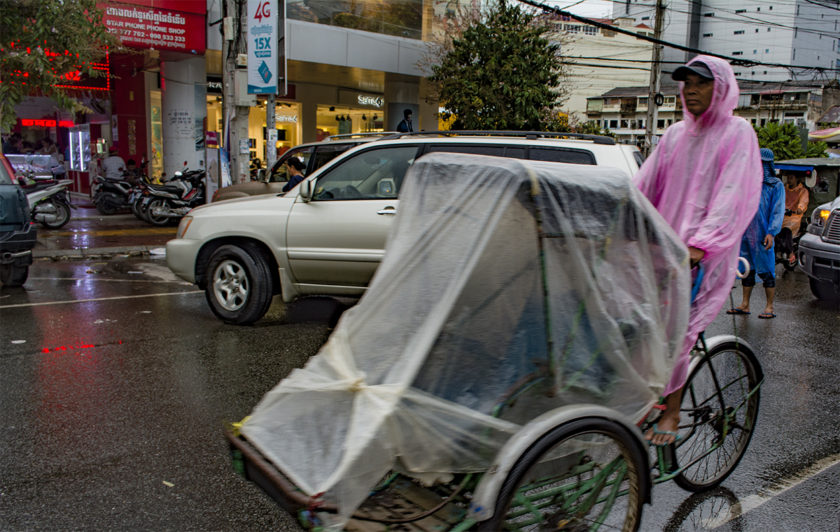 Since Cambodia is warm almost year-round, with temperatures rarely dropping below 20 degrees Celsius, the best time to visit is between November and March. However, if the little crowd and the lesser prices are the two important factors you’re considering, visit sometime between May and October – because this is when the Monsoon hits the country, making travelling neither better nor worse, but prices and crowd at their least.

Travelling to Cambodia is fairly easy. Indian travellers to Cambodia can get an eVisa, (valid for 3 months) as well as visa-on-arrival (valid for 1 month). Visa-on-arrival, which takes only a few minutes to process costs USD 30 and can be obtained at the airport or land border. Just carry a passport-sized photo and the fee, which has to be only in USD, and you’re good to go.

The official currency in Cambodia is The Cambodian Riel (KHR), but the country uses USD to a level that local people are always more willing to accept USDs than KHRs. So there’s no real need to carry the local currency unless you’re visiting very local villages and paying for really small things on the streets. Even most ATMs in Cambodia dispense USD. 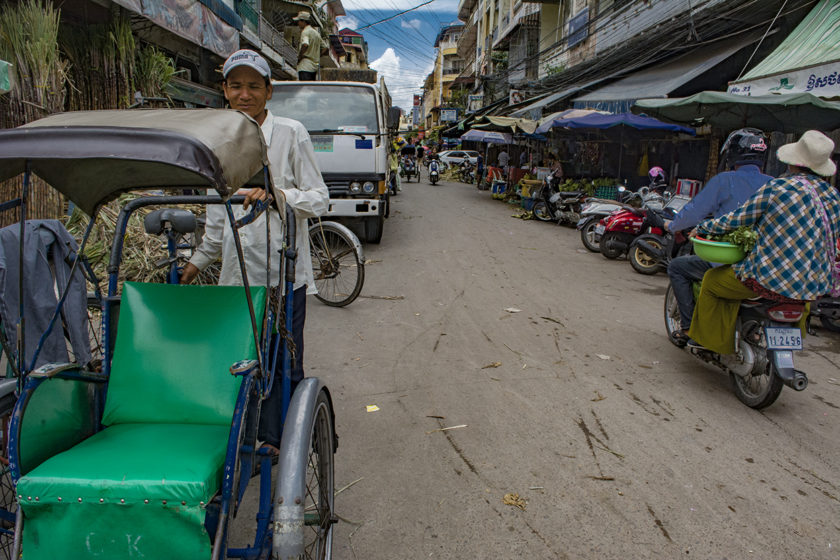 Have you visited Killing Fields and Tuol Sleng Genocide Museum in Cambodia? What are your thoughts?