“So how many years have you travelled for so far?”
“Almost two. I quit my job to travel, in February 2015, and that’s where I’ve been ever since.”
“And you said you lived in Scotland for a couple of years while studying, right? That makes it four years man, and not two.”

I clearly remember how a small conversation with a fellow traveller made my day, during one of the evenings at Agonda, in South Goa. I suddenly felt proud, and moreover realised that I’d always underrated my travel stint. It really has been 4 years since I’ve been exploring the world. Though of course, I don’t consider myself a traveller for the time I lived in Scotland, it wouldn’t be wrong, even if I did!

When I’d initially moved to Scotland, to complete my master’s degree, there was nobody I knew there. Sure my sister stayed in England, some 700 kilometres in the South. But technically speaking, I was on my own, and in a land that I barely knew. And since it was my first life experience ever, of living outside the boundaries of India (and New Delhi for that matter) I had no clue about what to expect — the food looked alien, local customs felt strange, even the ‘kind of English people spoke there (yes, I am talking about the popular Scottish accent) was no less startling. Simply put, I was a stranger in a strange land!

For the first few weeks after moving to Scotland, I felt similar to how you feel when you come out of the airport, for the first time, in a new country. From taxis to traffic lights – everything felt strange. I’d enter a supermarket and exit buying a few packs of biscuits, a good combination of bread & jam, and a pack of 12 eggs because they were the only products that looked familiar. A part of it was because I grew up in India for most of my life, and then suddenly one day I ended up somewhere in Europe where people considered fish and chips a proper food. There can’t be a bigger cultural change. I never believed life can be so different! 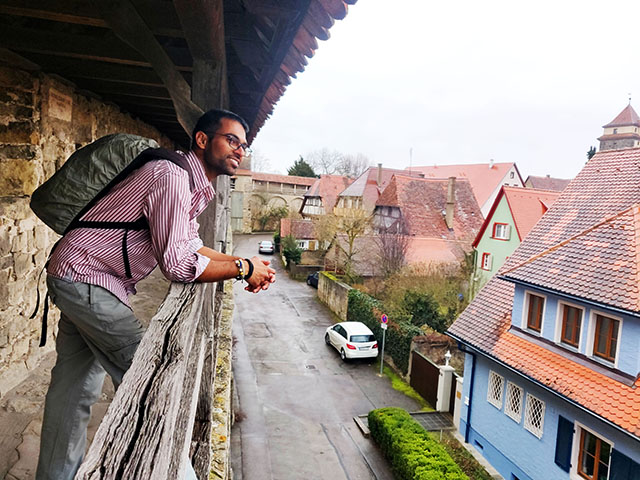 And that was my story, at least the story for the initial few weeks when I first landed in Scotland. I sure went there to pursue a college degree, but the experience was no different from that of travelling to a new place.

So Studying abroad experience is as good as travelling?

Perhaps! Or perhaps not!

When you’re in a different country, your mind pulls you towards your own community. You look for more Indians (if you’re from India) to speak and share your experiences with so that you feel at home. And it particularly happens when you know you’re going to be staying in a new country for a much longer time.

I remember during my university days, there was a group of Indian students, around 7 of them, who happened to share a dormitory on the university campus. Now because they found a comfort zone in being one among the 7-happy-and-young-Indians-ruling-the-streets-of-Britain, they never felt a need for mixing up with other communities – to befriend a German or hang out with a Chinese.

Though they were blissfully content doing what they did, the problem was, their lifestyle did them no favour. All 7 of them, returned to India, right after finishing their college degree because they made it too tough for them to fit in.

If something similar is the case with you, consider studying abroad, no different than studying in your home country. And such an experience is definitely far from travelling to a new country and experiencing a new culture. But if you embrace the change more positively, mix up with other communities and look forward to enjoying a few dinner turkeys on Thanksgiving, then it can be a much more invigorating experience altogether. And in that case, consider yourself no less than a long-term slow traveller.

Speaking of my experience, it was somewhere in between — neither of a socialite nor of a reclusive Sadist.

Looking Back In Time

For the initial few months, as I remember, I did nothing exciting. I would take a bus straight from my rented flat to the university, and vice-versa, be minding my own business. I hardly ate out or explored the city after university hours, or during weekends.

But as time went past, and my reclusive nature withdrew — slowly as it happened — things became easier. I soon found a part-time job in a local eatery, befriended a few people – representing different communities, and even planned my first-ever weekend trip, out of town, with them.

Now if I look back at my initial few months in the UK, I’d sure consider myself a fool who didn’t use the opportunity (of studying outside and gaining experience). But I at least gave it a chance. I never stayed only in the Indian community and rather tried my best to make friends outside it too.

So Studying Abroad – A Right Thing For Everyone?

I think studying abroad is a great way to expose yourself to new cultures and accept new realities. And as you have a much longer period of time with you, it is moreover easier for your introverted nature to slowly step back, at its own pace, allowing yourself to easily blend in.

It is a phenomenal opportunity for international exposure, learning a novel language and culture, and moreover feeling confident in being different communities – which you’ll eventually have to do at some point in your life.

Speaking of my experiences, I think it was because of those unsure moments, and cautious explorations of a foreign/uncustomary world around me that seed of travelling germinated inside of me. I remember how exploring the alien streets in Scotland, for the first few months, felt no less than an adventure. I was in pursuit of Alexander in me. And he somehow always dwelled thereafter.